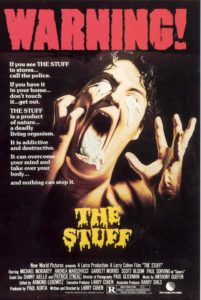 Schlock-meister Larry Cohen satirizes a nation of capitalist consumers in The Stuff, a camp horror-comedy from 1985 mostly forgotten today, rarely played on cable and scarcely available to rent. Spoofing 1950s-era fright films like The Blob and Soylent Green, Cohen, as always, has more on his mind than just blood and gooey guts, although there’s plenty of those too. Everything from advertising to nutrition finds a place in Cohen’s crosshairs. And although a comparable message was delivered by George A. Romero’s Dawn of the Dead years before in a more entertaining and even-minded format, Cohen’s biting commentary on Reagan-era conformity in America has plenty to say, even if the plot isn’t all that interesting. Viewers today won’t likely buy into the corny horror elements, but its humor—both intentional and unintentional—makes for a fun late-night watch.

When miners find yummy-tasting white goo surfacing from beneath the earth in bubbling glob, it’s eventually packaged and sold to Americans as a yogurt-like treat. (Warning Kids: If you see white goo, or anything else for that matter, oozing from underground, do not eat it.) Marketed with the tagline “Enough is never enough” in silly commercials and on brightly colored cartons, high sales of this zero-calorie snack cause other dessert companies to shut down. But habitual eaters are subject to the film’s tagline: “Are you eating it? Or is it eating you?” Indeed, those who jump on the bandwagon become hosts to the seemingly conscious alien blob, which abandons the human body it’s inhabited when exposed. Effects used in such scenes have a low-budget charm about them and provoke catcalls.

Cohen introduces us to the film’s huckster hero in a hilarious scene: Michael Moriarty plays ex-FBI agent and now corporate saboteur David “Moe” Rutherford, who’s hired by struggling ice cream interests to discover The Stuff’s safely guarded formula. When they meet to discuss his plan of attack, this hysterically obnoxious bumpkin enters the room, complete with mumbling good ol’ boy twang, shakes the hands of executive types and says “Sweaty palm… Another sweaty palm…” You might ask, why does he go by “Moe”? And if you’re not curious, he’ll tell you anyway. “Because no matter how much I get, I always want mo.” Get it? (And this is years before Damon Wayans popularized the phrase “‘mo money!” on In Living Color). Moriarty has a million priceless little quips like this throughout, his snarky comebacks delivered with stupid deadpan perfection. Some are genuinely funny; most are funny for the wrong reasons.

Elsewhere, youngster Jacob (Scott Bloom) witnesses The Stuff moving on its own in his family’s fridge. He tries to warn the others by launching an attack on a grocery store aisle, but it’s too late—his family has already turned into mindless crazies, or “Stuffies” as they’re called here, recalling pod people from Invasion of the Body Snatchers. Meanwhile, Moe’s investigation and pseudo-suave attitude earn him a few friends, Jacob included. First, there’s former cookie mogul “Chocolate Chip Charlie” Hobbs (SNL alumnus Garrett Morris, lampooning Famous Amos), whose random martial arts expertise affords more than one laugh. Marketing guru Nicole Kendall (Andrea Marcovicci) devised The Stuff’s successful campaign, but she’s riddled with guilt once she learns it’s brainwashing people to eat a mind-controlling organism. Regardless, Moe beds her without fail. This foursome teams with wildly racist militia nutso Colonel Malcolm Spears (Paul Sorvino), who agrees to save America and attack The Stuff at its mining center, and also broadcast about its dangers to the public on his private radio station. Danny Aiello appears briefly as an FDA executive.

Much of these throwaway plot elements and characters are difficult to suffer through, but Cohen’s sense of humor and no-holds-barred satiric edge makes up for a sloppy script. I knew that Cohen had stolen my heart when, after Americans learn The Stuff is dangerous, he depicts a mob blowing up a Stuff shoppe next to a McDonalds—the real enemy in Cohen’s mind. His none-too-subtle approach is apparent in several riotous mock commercials for The Stuff, including one where Clara Peller, face of the “Where’s the Beef?” campaign, appears with Abe Vigoda in a restaurant and asks “Where’s the Stuff?” These moments force us to consider how food products are sold to us, what they’re made of, and what effect they have on our bodies. In this respect, The Stuff would make a nice inclusion in a marathon alongside The Informant! and Supersize Me and Food, Inc.

Much about Cohen’s plotting comes out of left field, and few of these elements work together in a congruous way that today’s audiences will appreciate. He never seems entirely sure if what he’s making is a comedy, horror movie, or satire, and we feel that in every frame. But the absurdly unexpected is part of The Stuff’s charm, and a recurring tonal quality of Cohen’s work. Consider the bizarro nature of his sophomore horror effort, It’s Alive from 1974, where a woman gives birth to a mutant baby who transforms the proceedings, albeit momentarily, into baby-slasher fare (Cohen made a whole trilogy of killer baby movies). God Told Me To is a procedural about a series of killings perpetuated by people who claim they were told by God to commit murder. In 1983’s Q: The Winged Serpent, Cohen follows an Aztec dragon that nests atop the Chrysler Building and decapitates New Yorkers.

Deservedly panned by critics, The Stuff has not bettered with age. Unlike many ‘80s horror fare, from Fright Night to Night of the Creeps, there’s not a resurgence of affection for Cohen’s movie, at least not a significant one (don’t expect a Hollywood remake). But no matter how mish-mashed it feels at times, it worked for me on a level of pure satire. My positive review and recommendation come with a few qualifiers, of course, as viewers expecting a greater concentration on comedy or horror will feel let down. This is a movie to be cherished with a grain of salt, watching with a detachment toward the events to examine Cohen’s commentary and the often humorous ways he executes it. It’s an absurd movie, a sometimes thoughtful movie, but also a fun one when a small group of friends get together and let the riffing begin.