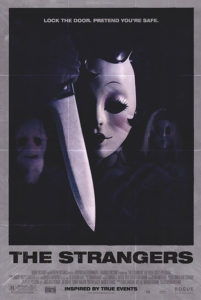 The Strangers opens with cheesily narrated titles informing viewers there are “1.4 million violent crimes in America each year” and the subsequent film depicts events based on one of these incidents. Of course, the actual crimes depicted therein remain unsolved; though doubtful they ever happened at all. Instead, the opening titles should forewarn: “The film you are about to see is one you have seen before. When the end credits roll, you will leave the theater irritated at how derivative and unsatisfying this movie experience has been.” It would be more accurate.

This slasher flick begins with a morose young couple arriving at an isolated summer home for what should’ve been a romantic weekend. We learn that James (Scott Speedman) proposed to Kristen (Liv Tyler) only to be disappointingly turned down. Inside, he’s sprinkled rose petals over every piece of furniture, in the bathtub, and on the bed. Champagne cools in an ice bucket. The dinner table is set for a meal never to be served. An old record player echoes tunes by Tomandandy made to sound like vintage folk music, and the film’s color palette and the couple’s clothing screams of the 1970s—an era of horror the filmmakers surely sought to emulate, though the titles pinpoint the film’s events as occurring in 2005. All of this creates the most awkward environment imaginable for a couple whose future is uncertain.

The mood is melancholy as the two wipe away tears and move around each other so we can just barely get a sense of their prior relationship. They talk, and, consumed in the moment, they get close. All at once a four-in-the-morning knock at the door booms throughout the house. Who is it? An odd girl asking for someone our couple has never heard of. She leaves, returning later after James has left for a soul-searching drive. More knocks. Taps at the windows. Soon we get the impression that there’s more than one and they have no intention of leaving. And then we see it, out of focus in the background: a figure wearing some kind of mask, lingering in the shadows.

What follows is a home-invasion thriller none too different from Michael Haneke’s Funny Games from earlier this year, except without all that intelligent social and cinematic commentary baggage. Indeed, The Strangers is the polar opposite of Haneke’s film, in that it revels in the torture-as-entertainment value approach that Haneke satires in albeit graphic but non-glorified detail. Debut writer-director Bryan Bertino constructs a movie grossly attracted to nihilistic, motivation-less killing for killing’s sake, and we’re left wondering if he knows the meaning of subtlety. Bertino’s narrative is so stripped that without the reasonably impressive production value it would earn categorization as a snuff film.

By the time you’ve reached the end, we know nothing about the killers other than (A) they’re human, (B) they have masks, and (C) they plan to kill again. You could take any unsolved murder and after the fact claim that masked weirdoes did the killing. And that’s exactly what Bertino does here. But again, no one should see this movie believing it’s based on actual events. It’s as factual as Psycho and The Texas Chainsaw Massacre were toward their Ed Gein source, but here probably motivated by the Manson family’s killings. The whole “inspired by” angle is just a silly The Blair Witch Project-like scheme to make the film seem more “real”. Any details about the killers are left hidden, in all probability explored in an inevitable (possibly direct-to-video) sequel.

Bernito’s direction has possibility. His compositions are claustrophobic and desolate, giving us that squirmy feeling a good horror movie should produce. But nothing about his story is original or new. In fact, it’s so pointedly routine that cliché is the only word to describe it, and angrily so. Not even Bernito’s impressive first-time direction can make up for how absurdly familiar the whole procession plays out, right down to the last scene, and a final shot we’ve had to endure in countless slasher movies for decades. But give this guy some quality material not so insipidly formulaic and there’s some potential there.