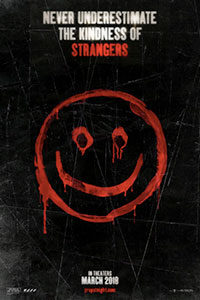 Here’s a confession: Over the past few weeks before seeing The Strangers: Prey at Night, a belated sequel to the 2008 slasher The Strangers, I chose to revisit the world of masked killers and horny victims with the “Friday the 13th” franchise. Thinking perhaps I would enjoy their so-bad-it’s-good quality, I began with the original Friday the 13th (1980) and endured seven sequels through Friday the 13th Part VIII: Jason Takes Manhattan (1989). My realization was simple: these are not good movies. They contain a fiendish, detached quality to them, where characters remain undeveloped and just as quickly dispensed with as they’re introduced. There’s no one to root for, except maybe the clandestine killer, which is a troubling and inhuman experience for the viewer. Without emotional attachments or catharsis, these viewing experiences were empty, to the degree that I chose not to waste more time writing about them.

My memory of The Strangers comes with similar feelings, as director Bryan Bertino delivered “a movie grossly attracted to nihilistic, motivation-less killing for killing’s sake,” as I wrote in my original review. The setup involved one bag-headed man and two doll-masked women torturing a melancholy couple for no reason whatsoever. After a long night of scares and torment, the killers murder the couple and escape, leaving the audience deeply unsatisfied. The silly ending suggested that, perhaps, the woman may have survived, delivering a shock that equates to the Friday the 13th‘s nonsensical “it was all a dream” endings. Dreading a similar experience, I entered the sequel with low expectations, anticipating a film that would once again contain a sadistic devotion to its killers, a pointlessly derivative style, and a familiar home invasion scenario. Instead, to my surprise, Johannes Roberts, director of last year’s rather dreadful sleeper hit 47 Meters Down, delivered perhaps the best straightforward slasher film in decades.

Fortunately, Prey at Night exists on its own terms. Screenwriters Bertino and Ben Ketai have made it so viewers can easily watch and enjoy the film without ever having to see the ugly original. Aside from the appearance of the three killers (Damian Maffei, Emma Bellomy, Lea Enslin), who were meaningless nonentities in the first film, no other details carry over. The initial scenes establish a pleasant middle-class family, and each member has a personality that continues to form during their time onscreen, even after the mayhem begins. Parents Mike (Martin Henderson) and Cindy (Christina Hendricks) struggle with their delinquent teenage daughter Kinsey (Bailee Madison), while their older sporty son Luke (Lewis Pullman) is better behaved. Before sending Kinsey off to boarding school, they’re spending a final weekend together as a family at the otherwise empty rental trailer park for vacationers owned by Mike’s brother. 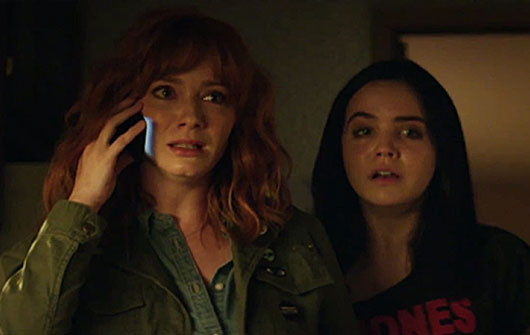 Prey at Night spends less time in torment mode, offering just a few minutes early in the 85-minute feature where a creepy girl knocks on the family’s trailer door and asks, “Is Tamara home?” Kinsey and Luke soon realize their situation is dire when they find their aunt and uncle’s tied up and mutilated bodies. Before long, the film racks the tension high after the first killing and then sustains that height until the final moments. The experience is relentless, but the characters, particularly Kinsey and Luke, make the proceedings more than just people running from masked psychos in the dark. Madison has been dealing with creepy things at night since she appeared in Don’t Be Afraid of the Dark (2010), and Pullman is the son of Bill, meaning both have talent. And while Prey at Night follows the basic formula of those awful Friday the 13th movies, its alterations of character and empathy make the viewing experience more rewarding than just another round of punishment with masked sadists.

Roberts evokes a 1980s slasher aesthetic, as many of today’s horror filmmakers often do. Indeed, the director has posited himself as a modern-day John Carpenter (47 Meters Down was preceded by “Johannes Roberts’,” a Carpenter-esque claim to auteurship that has yet to be earned). But the director’s homages in Prey at Night remain subtle enough to avoid being a distraction. Adrian Johnston uses a piano melody in his score that echoes Carpenter’s theme to Halloween (1978), a clear influence as teenagers run through an abandoned neighborhood from their pursuer. The earth-toned photography by Ryan Samul captures the eerie atmosphere of the empty trailer park, as street lamps illuminate the omnipresent mist that lends every exterior scene notable depth. I also enjoyed Samul’s use of slow zoom-ins, master shots, and long, immersive takes that allow the viewer to absorb any given scene. Roberts even finds ways of nodding to Christine, Carpenter’s underrated Stephen King adaptation from 1983, with a sharp use of headlights in the distance and a brooding, steadily approaching car in flames.

Suffice it to say, everything Roberts sets out to do in The Strangers: Prey at Night, he accomplishes. He introduces a family of characters who feel realistic, as though their actors have lived in the roles. He establishes a sense of atmosphere and mood, evoking the slasher films of the 1970s and 1980s, and in many cases creating something scarier and more involving. He implants a lasting sense of dread by showing the pitiless behavior of his killers, making every death visceral and emotional. And best of all, he creates heroes, people we want to see overcome their obstacles and survive, and they do, but not without a cost. The pitch-perfect ending implants doubt in the viewer: Are the heroes really safe? To what extent have they been traumatized by the film’s events? However you interpret it, the ending is effective and rewarding. A self-assured horror film that avoids the ironic or self-aware lightness of later slashers, Prey at Night makes the audience feel everything it wants us to, and what’s more, it outdoes the original in every way, making for an unexpected, satisfying slasher—a rarity to be sure.