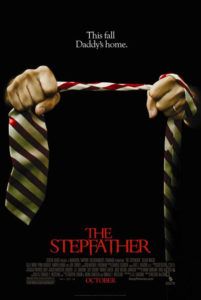 The Stepfather is another in a long line of recent 1980s horror remakes. This one comes from Nelson McCormick, director of last year’s Prom Night remake, and it’s made with the same sense of pointlessness. Following 2009’s Friday the 13th and The Last House on the Left, and preceding next spring’s A Nightmare on Elm Street relaunch, this inane venture into familiar territory does nothing besides inspire audiences to put the 1987 original into their rental queue. And why not? Terry O’Quinn (now known as John Locke on Lost) was marvelous in the original role, creepy enough to garner a fun 1989 sequel.

But to give credit where credit’s due, Nip/Tuck star Dylan Walsh lends considerable everyman eeriness to his non-reinterpretive performance. The story follows the same sort of sociopath, one who targets single-mothers with children and eventually kills them. In the opening scene, Walsh’s character shaves his beard and cuts his hair, dresses, eats breakfast, and walks out the front door, stepping over the dead bodies of his most recent family of victims. Then, under his new assumed name David Harris, he finds Susan Harding (Sela Ward), another lonely divorcee to seduce, and it all starts over again. After six months, he and Susan are engaged and he’s living in her house with her two young children, making speeches about becoming a whole family. All seems well. Trouble starts when her impetuous juvenile delinquent son, Michael (Penn Badgley), returns from military school to find mom engaged to a menacing stranger.

For a corny laugh, everyone points out how David is too-good-to-be-true. Even Michael thinks he’s a swell guy too, until David’s story reveals some obvious holes, none of which are noticed or suspected by anyone but Michael. And because Michael has a history of bad behavior, naturally no one believes his misgivings. Meanwhile, David snuffs out the suspicious old cat lady next door after she sees him on America’s Most Wanted, and he kills off Susan’s ex-husband when he comes snooping around. As the bodies and doubts pile up, David’s new family shows signs of crumbling, and he doesn’t handle familial distress well. So he makes his ritualistic call to cancel the newspaper subscription, which means trouble for the Hardings.

The audience twists in their seats as tension is built not from Walsh’s creepy performance but from how incredibly stupid the characters prove to be. Take Michael’s girlfriend, played by Amber Heard, whose character seems incapable of wearing anything other than bikinis and clothes two sizes too small. If Michael showed her a photograph of David murdering someone, she wouldn’t believe it. The three credited screenwriters have made almost every character into a skeptic, but she’s the queen of them. It takes David socking her in the jaw before she figures out he’s not who he appears to be.

Staying inside the virtually bloodless and nudity-free guidelines of its PG-13 rating, the movie isn’t complete trash. It relies on suspense instead of gore, which is admirable. In a way, it recalls Hitchcock’s Shadow of a Doubt, wherein Joseph Cotten’s sweet Uncle Charlie visits Everytown, USA, and proves that even suburban families have murderers in their midst. McCormick uses Walsh’s plain appearance for some unsettling moments, as the actor effectively switches between happy husband to crazed lunatic. But the story’s predictability and the ending’s compulsory sequel setup are worthy of eye-rolls. In no way has the material been refreshed or made relevant for modern audiences, forcing us to ask why a remake was necessary. The answer, of course, is that it wasn’t.