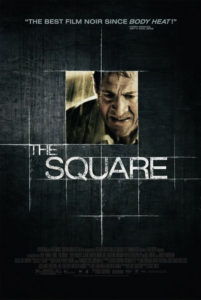 Russian author Anton Chekhov defined a practice in storytelling that states if a gun is introduced in the first act of a story, then in the third act that gun must be used. This overused device appears frequently in film, above all in thrillers. It’s a tired mechanism that’s applied to curious, perhaps metaphoric extremes in The Square, an engaging neo-noir from Australia. Instead of a gun, writers Joel Edgerton and Matthew Dabner introduce the concept of sharks swimming upstream into a freshwater river. Later in the film, the shark makes an unexpected appearance and devours a periphery character. Though this has little direct bearing on the surrounding plot, it’s one of the dark film’s best, if arguably inconsequential moments.

Due comparisons to Lawrence Kasdan’s Body Heat, which reaches back to Billy Wilder’s Double Indemnity, this grim tale offers a slew of familiar noir components: an affair, a load of cash, an accidental murder, and the scrambling by characters to cover up their tracks along the way. The setting is a warm summer Christmas in a Sydney suburb, a hot and rainy season that lends a contrasting atmosphere to the typical chiaroscuro noir picture situated in the metropolis. Here, wiping the brow or watching the rain equates to hiding in the shadows. The characters lead humble lives, mullets are frequent, and rarely is a smart decision made.

The title refers to a space of land on a construction site awaiting concrete to be poured. Ray (David Roberts), the construction supervisor, arranges with a subcontractor for a cash kickback on the job; this will allow Ray freedom to escape his dead marriage and run off with his married neighbor Clara (Claire van der Boom). But it will also take time, and Clara is impatient. An easier solution: A bag of cash that Clara saw her husband, the tow-truck driver Smithy (Anthony Hayes), stash away in the attic. Clara convinces Ray to arrange a scheme that would place the money in their hands but leave no one the wiser. So Ray hires Billy (Joel Edgerton) to burn down Smithy’s house when the house is empty; and meanwhile, Clara will have already taken and stashed the cash elsewhere. That way, Smithy thinks the money was burned up. Of course, nothing works out as planned and bodies begin to pile up. You can bet one of them gets buried in the square, and as delays prevent the concrete from being poured and the body being hidden, Ray sweats.

Characters behave out of crisis and react, often unthinkingly, to disaster or threats. Almost never do they think things through. With a few calm conversations, possibly a divorce, and some patience, the characters might’ve all arrived at a happy ending. But that doesn’t make for compelling noir. As indicated by the title of a similar picture, the Coen Brothers’ Blood Simple, these people are driven by the desires of lust and money, not logic, and they’ll kill to satisfy their desires. And through the characters’ botched plans, blackmails, and desperate attempts to make things right, director Nash Edgerton (brother of the co-writer and star, Joel) makes their motivations and (mis)calculations gripping.

Though the noir characters aren’t the brightest or classiest assortment, the actors avoid portraying them like mere white trash (though, sometimes such bad decisions are made that it’s frustrating). Each character has a streak of danger running through them that lends the material unexpected menace, much as the plot avoids obviousness altogether. Instead of using Chekhov’s Gun as a device in the main plot, for example, the filmmakers acknowledge typical formula as an aside—a shark attack on a character, but not a main one. They use this device, but in the main scenario avoid classic storytelling archetypes that might allow the audience to guess what happens. This makes for an involving, unpredictable viewing experience in a genre whose borders have been outlined over the years to pure formula.

The finale lacks a conclusiveness that typical film noir boasts, leaving the hero to stagger out into the street to go… Where? Most of these pictures end with the hero, always an anti-hero such as Ray, dead or captured by the police. Yet the Edgertons end their film with barely a hint to a crucial question—What now?—which lacks a needed sense of finality. This minor quibble aside, The Square marks an incredible debut for Nash Edgerton, complete with an assuredness of style and tone that comes seldom to first-time filmmakers. Much like his film’s conclusion, Edgerton suspends his audiences by forcing us to ask what comes next. If he continues to grow as a filmmaker, there’s much we have to look forward to.