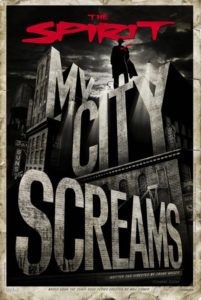 Frank Miller’s The Spirit misfires in every way a movie can, offering nothing by way of entertainment value, not even in a mocking sense. The result is an honest-to-goodness attempt to make a serious superhero film, specifically one based on Will Eisner’s popular comic character from the 1940s, but fails so miserably that the effect on viewers evokes equal parts contempt, disgust, and even grief for all involved. It’s simply embarrassing. The movie doesn’t even allow viewers to remove themselves from its awfulness and whisper sarcastic remarks to one another—the right of any audience attending a bad film—as we’re too absorbed by the potency of cinematic stink occurring onscreen to look away. But how could the writer of such classic graphic novels like 300 and The Dark Knight Returns in 1986, which helped redefine Batman’s then-soft image into the brooding figure we know today, fail in bringing another such superhero back from the dead? Because Frank Miller is no filmmaker. He can sketch out a comic book, lacing every scene with his signature brand of machismo, but constructing a film is another matter entirely.

Some might argue that Miller has directed before, thinking that his “co-director” credit on Robert Rodriguez’s Sin City was perhaps a sign that he actually appeared onset and followed the production process. Alas, no. Miller wrote the source material for that film and Rodriguez followed it with jealous devotion, setting up shots based on cells from the graphic novel’s page. Drawing so heavily from the source, Rodriguez, being the fair sort he is, thought his inspiration too undeviating and believed that Miller should receive co-director credit. As a result, Rodriguez’s gesture of good faith earned him dismissal from the DGA, but Miller received his credit, and apparently the diluted notion that he could direct a film on his own.

Miller’s script and presentation attempt to modernize Eisner’s hero, while also retaining an atmosphere where neo-noir narration and the genre’s penchant for 1940s period garb and fixed gender roles are prevalent. And, of course, Miller’s own tastes for unabashed sexism stains the project. All this within its own very limited exploration of a comic book hero whose powers and appeal are not only unclear, but uninteresting, containing no dynamic whatsoever. Combing simply too many ideas into a singular mess-of-a-film, Miller’s artistic masturbation flails out of control and spills out onto the screen, leaving us to wonder if this is a spoof or serious filmmaking.

As the story goes, police officer Denny Colt (played by Gabriel Macht, an unknown, uncharismatic actor) was killed on duty but then returns from the dead as The Spirit, who sporting a cell phone, black suit, red tie, and domino mask scales the rooftops of Central City to spot and fight crime. His archnemesis is The Octopus (Samuel L. Jackson), a comic book villain of the worst order that monologues at curious length about his dislike for eggs (a pointless characeristic which continues to baffle me), bewails being surrounded by his endless horde of cloned witless thugs (all played by Louis Lombardi), and dresses in flashy themed outfits ranging from Japanese samurai to Nazi commander. Both hero and villain are impervious to harm, seemingly for the same reasons, which from my understanding involves some diamond-encrusted goddess that appears in dreamy sequences of unconsciousness. Your guess is as good as mine.

The plot involves The Spirit’s old flame Sand Seref (Eva Mendez) returning to town and striking up a deal with The Octopus, revealing herself as a typical Miller female: embracing the station of her male fantasy stereotype. Case in point, while attempting to intimidate one of her underlings with a villainesque speech, she sits on a laser scanner and prints out copies of her butt. Only Miller, or perhaps Larry Flynt, could conceive of such a bimbo. There are other women in the film, and to be sure The Spirit locks lips with all of them at one point or another: the good-hearted love interest doctor Ellen Dolan (Sarah Paulson), French belly dancer and torture expert Plaster of Paris (Paz Vega), and The Octopus’ utterly meaningless sidekick Silken Floss (Scarlett Johansson, whose performance is stagnant beyond compare).

What confuses most is Miller’s clear intention of presenting what appears onscreen, and the nonsensical, deplorably uneven nature of what is shown. The best comparisons are the worst parts of Batman & Robin (as if there were any good parts to that train wreck). Somehow Miller has justified that his film copies Rodriguez’s approach in Sin City, complete with largely black & white color designs recalling the comic page, here interspersed with a more liberal application of reds and greens. Except, the production’s cinematography doesn’t mirror the content, unlike Rodriguez’s did. Miller’s tone is zany, with goofy humor and over-the-top fight sequences. The comic relief is garish and unfunny, and the gaudy performances are desperately campy, yet the film expects us to take the events therein seriously.

Most impressive is how tedious the film manages to be. Never do we care about The Spirit’s mysterious origins, even though the character keeps pondering them—probably because we never understand his abilities. (Question: If he was brought back from the dead invulnerable, why can he do backflips up the side of a building?) The visuals are so obviously carbon-copied that it’s insulting for the viewer. And the dialogue ranges from eye-rolling to cringe-inducingly bad. Though comics like Eisner’s are intended abstractions from reality bound by metaphors, the distance Miller places between his film and any fictional realm of possibility is unmapable. The Spirit exists solely for its director to purvey plenty of low-cut cleavage, feature his hero’s rippled body with Miller’s always present (albeit unintentional) homoeroticism (one scene features hero and villain rolling around together in the mud), and allow a self-indulgence for every misguided impulse that pops into his head. What we’re left with is a mind-boggling mess underlined by its reaching so very high and failing so absolutely.