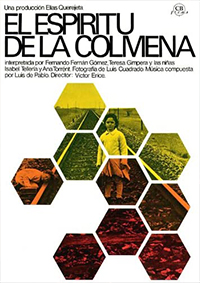 In The Spirit of the Beehive, the innocence of a single child becomes a synecdoche for the whole of Spain. The story follows a six-year-old girl named Ana, who, with eyes wide and curious, proves tragically resilient during the Spanish Civil War. Filmmakers often use children to access the purest form of emotions or the truest sense of humanity. However, when juxtaposed against a world filled with war, violence, death, and corruption, the perspective of a child will return the viewer to a time before we learned the many harsh lessons the world teaches, before we made endless moral compromises, and before we accepted or learned to compartmentalize so many awful truths. Writer-director Víctor Erice employs Ana as a reminder of what people lost during the conflict, framing the violence and horror through the eyes of a child. Ana reminds us how to see these truths for what they are. It’s no coincidence when, in a scene in her village’s classroom during an anatomy lesson in which students place organs onto a cardboard cutout of a man, a teacher calls on Ana to locate the figure’s eyes. Ana puts the eyes in their spot, allowing the man to see, just as she does for the audience.

The film takes place a year after Francisco Franco took power in 1939. In the context of the screen story, Franco’s Nationalist party had just seized control after defeating the leftist Republic during Spain’s bloody Civil War. Franco would remain in power until his dictatorship ended with his death in 1975, after nearly four decades of oppression, strict patriarchal rule, nationalist Catholicism, and political authoritarianism reshaped the culture. When Erice set out to make The Spirit of the Beehive, he did so in the less intense period at the end of Franco’s rule; however, the Spanish people still lived with the trauma of politicide, repressive policies, and death tolls in the hundreds of thousands. In 1973, the year The Spirit of the Beehive made its debut at the San Sebastián Film Festival, the dictator’s health was failing him. Many could see Francoist Spain’s time coming to an end, and Erice’s critique of the regime was welcomed more than it might have been a decade earlier. Still, Erice disguised his subversive social critique behind deliberately indirect remarks, fooling the strict censorship board that would be quick to remove any clear affronts to the ruling state. 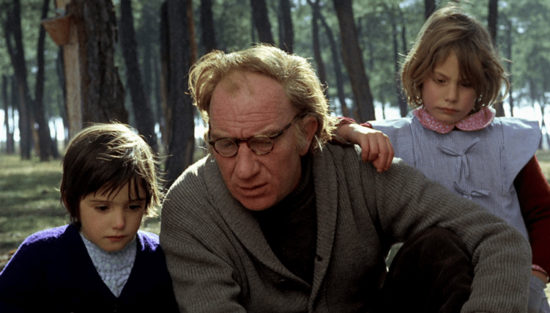 Even though Erice’s filmmaking style might be called minimalist and restrained, he uses this style to create a sharp contrast to Spain’s popular and weightless comedies of the time. Broad films like Pedro Lazaga’s La ciudad no es para mí (The City is Not for Me, 1966), about a country father who visits his son in the big city, became top box-office earners. Whether they were empty comedies or outright state-sanctioned productions designed to present a unified front to the world, Spanish cinema at the time proved radically different from Erice’s film. The Spirit of the Beehive comes out of a European aesthetic, often attributed to Michelangelo Antonioni, which employs time and space to symbolic effect. The film unfolds in a series of protracted shots, and the camera rarely makes expressive movements. Long passages develop without dialogue, leaving the director’s critique far from a clear affront on Francoist ideology. Instead, the viewer must discover the film’s themes through a process of reading and interpretation, and therefore, they could miss Erice’s remarks on Franco.

Just as filmmakers use children to stand for a part of the whole, they also use history and fantasy to comment on the present. The Spirit of the Beehive remains unique for 1973 not only because it situates the story at the beginning of Franco’s takeover but because it uses fantasy imagery from James Whale’s Frankenstein (1931). The story follows Ana (Ana Torrent) and her slightly older sister, Isabel (Isabel Tellería), who live in Hoyuelos, a Castillian village. These are ordinary girls who skip, pillow fight, and share secrets; however, an air of death and political turmoil surrounds them. The first scenes show the sisters watching Frankenstein inside an impromptu cinema. Transfixed, Ana’s mind floods with images and ideas. In particular, she thinks about the scene involving Frankenstein’s monster and the young girl, where the confused monster tosses her into the lake like one of her flowers. “Why did he kill her?” Ana asks Isabel that night. Isabel tells Ana that the monster is the spirit of a man. To see it again, they can search for it near an abandoned farmhouse, or Ana can close her eyes and say her name.

Erice explores Ana’s power of belief through a combination of dreams and reality. Isabel’s stories about Frankenstein’s monster shake Ana so much that she must search out the spirit, regardless of her fear. It’s almost as though Ana conjures the spirit from her dreams when she finds a republican soldier in the farmhouse, wounded and hiding. Though she is afraid, Ana helps the soldier by offering him an apple and dressing his wound. Inevitably, Francoists locate the soldier and shoot him on the spot. But Ana continues to search for the spirit, convinced that he will take another form. One night, she goes searching for him. Once again, she conjures the spirit from her mind; this time, it resembles Frankenstein’s monster—a convincing and haunting recreation that approaches her near a shore. Trembling, Ana closes her eyes, afraid that the creature might repeat the scene from Whale’s film. But she identifies with the monster, and he embraces her. Scholar John Hopewell suggests that Ana seeks the spirit to replace her father, Fernando (Fernando Fernán Gómez), who spends most of his time in his study reading, listening to his shortwave radio, tending to his beehives, or losing himself in thought. “Come out of the clouds,” someone tells him. Indeed, Ana takes after her father; their minds are always elsewhere. 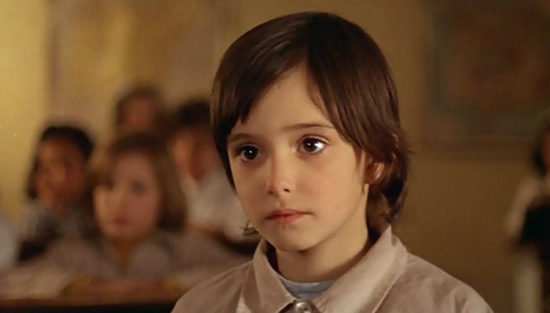 There’s a point in everyone’s childhood where they stop believing in the imaginary, from Santa Claus to the Boogeyman. Although the focus of The Spirit of the Beehive is Ana’s perspective, it’s worth noting that Isabel has stopped believing. She lies and tells her sister stories, encouraging Ana’s fixation on Frankenstein and the spirit, which sets the foundation for Ana’s later visions—even though she believes “everything in a movie is a lie.” Isabel has already become cynical, even violent—in one scene, she strangles a cat. “What’s wrong with you?” she asks the cat when it scratches her to escape. Then she uses blood from the wound for makeshift lipstick. Later, Isabel lies motionless on the ground, playing a cruel trick on her sister. It’s unclear whether seeing the Civil War has given Isabel macabre ideas or if she’s just naturally morbid. Nevertheless, each of the family members seems to be in their own little world. Take Teresa (Teresa Gimpera), their mother, who avoids her husband and looks preoccupied throughout the film. Early on, she mails a letter to a far-away lover in a train slot, and she watches as the solemn faces of men look out from the passenger car’s window. The details about her affair remain scant. Erice depicts characters marked by interiority and alienation from the war, but he only shows us projections from Ana’s mind.

Indeed, even though Erice includes several scenes with other characters, the film’s aesthetic occupies Ana’s subjectivity. This is by design since the political conditions under which Erice made The Spirit of the Beehive force a mode of ambiguity that requires interpretation, which naturally aligns with Ana’s worldview. As a child, she remains unable to make sense of the world and fills in the blanks with her own mythology of spirits. Accordingly, Erice floats from one image to the next, not necessarily in a shot-to-shot narrative logic, but in a series of dreamy transitions loaded with potential meaning. For instance, the director seems to transition from Ana dreaming to the next morning, when the republican soldier appears out of nowhere, reinforcing Ana’s impression that her thinking about the spirit made the soldier materialize. This dreamlike perspective, shot in honey hues by Luis Cuadrado, is contrasted by Erice’s setting in a world marked by very real conflicts. Peripherally, Erice offers scenes of Ana’s family members, each isolated from one another in separate shots, and rarely if ever seen together, to remind us that the film takes place in reality.

Erice’s blend of reality and fantasy would prove highly influential, supplying filmmakers such as Guillermo del Toro with a blueprint. Del Toro’s own The Devil’s Backbone (2001) and Pan’s Labyrinth (2006), particularly the latter, follow Erice’s schematic: a child in the Spanish Civil War processes reality by losing themselves in fantasy. The Mexican auteur differentiates himself by employing genuine fantasy elements, ranging from ghosts to mythical creatures, and creating uncertainty about whether they’re projections of his characters or actually inhabiting their films’ worlds. Erice never hints that Ana’s imaginings could be real; instead, he situates the film in the real world and uses the notion of a spirit to raise questions. How appropriate, then, that Ana sees Frankenstein’s monster of all things. Monsters are, by their nature, unknowable aberrations, sites of the inhuman, unfamiliar, and deviant. Ana lives in a world of monsters that she cannot yet understand, and her interest in the macabre represents an escape from, or perhaps even normalization of, the horrors in her mind. 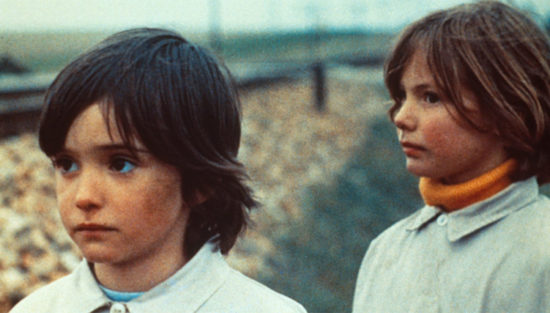 The Spirit of the Beehive uses monstrosity to denote the presence of something wrong, and upon its release, Francoist critics considered this social critique blatant. But Erice’s artistry and restraint avoid the more obvious signs that another Spanish filmmaker, such as iconoclast Luis Buñuel, would employ to send up Francoist ideology. Erice’s methods and uses of symbolism throughout—every painting on the wall in Ana’s home has a coded meaning—remain readable yet deemphasized by his obfuscatory treatment of mood and image. For that reason, time has been kind to The Spirit of the Beehive. Aside from a harsh flute score by Luis de Pablo, it feels ageless and no less powerful. Its symbolism has led to countless other interpretations beyond what Erice intended. For example, scholar Linda Ehrlich argues that children “could be seen as paradigms for the visionary and alienated artist” if the film were viewed as a work of self-reflective expression. Perhaps Erice, who only made a few short films and two more features in his lifetime—including El Sur (1983) and the documentary Dream of Light (1992)—saw himself in Ana. Doubtless, working as a filmmaker in Franco’s Spain left Erice to feel inhibited.

The film offers a scene in which Fernando examines the dead soldier’s body in the same room where Ana watched Frankenstein, suggesting that films might be a form of cultural triage. While The Spirit of the Beehive’s direct political remarks might feel less potent today, what remains are lingering ideas about how cinema ignites the imagination and engages the mind. From the moment Ana sees Frankenstein, she is scarred. Although that reading remains valid, Erice’s point isn’t as simple as equating the monster with Franco. Rather, he examines not only the frailty of the mind but the power of cinema to change it. The film acknowledges the damage that monsters can do, but it also demonstrates that, when used in an expressive context such as cinema, films can function as prompts to raise questions of both national and personal identity. When Ana opens her bedroom window with its honeycomb design in the final scene and announces, “Soy Ana” (“It’s me, Ana”), it’s a statement of declaration and invitation. Ana has seen the monster and comes to know herself better for it. In a sense, the film reveals the necessity of monsters. When they appear in life or cinema, they present a platform against which we can better know ourselves.

(Note: This review was originally suggested, commissioned, and posted on Patreon. Thanks to Jack for the suggestion and continued support!)

Hopewell, John. Out of the Past: Spanish Cinema after Franco. British Film Institute, 1986.