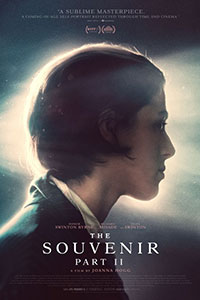 In the opening scene of British filmmaker Joanna Hogg’s The Souvenir from 2019, Julie, played by Honor Swinton Byrne, pitches her idea for a student film to a panel of instructors. She admits to living in an upper-class bubble and resolves to escape that narrow perspective through her art. But a funny thing happened on her way to self-discovery. She fell in love, with a heroin addict no less, and her first real lover, Anthony (Tom Burke), died from an overdose at the end of that film. Anthony’s death left Julie without any more certainty of who she is or what her artistic voice should say than when the movie began. In The Souvenir Part II, Hogg continues her semi-autobiographical account, showing Julie as she confronts her feelings and learns how Anthony impacted her—all through Julie’s ability to express herself as a burgeoning filmmaker. If The Souvenir was a watershed film in Hogg’s career, the sequel feels like a crystallization, as well as an obvious continuation, of that achievement. It’s also an arguably superior film in how it shows Julie moving from an unresolved entity into a more assured human being.

From the outset, Anthony’s absence leaves a hole in Julie’s life. Picking up where The Souvenir ends, Julie has fled to her parents’ idyllic country estate, filled with gardens and wildflower fields, where she often resets. Nature is a recurring visual motif in Part II, with montages of flowers and other plantlife serving as cleansing transitions from one chapter to the next. Julie soon returns to school—in shoulder pads and silver slacks that remind us of the 1980s setting—only to realize that she no longer wants to do her planned documentary project. Instead, she will work out her relationship with Anthony onscreen. However, she still struggles to find her perspective. Once again, Richard Ayoade appears as a pretentious director who wants feedback for his arty musical project. In place of Anthony, who challenged Julie to articulate her feelings about art, Ayoade’s character grows frustrated when she responds that his film “excites” her. Unable to clarify that feeling further, Julie knows what she likes, but she’s only just learning how to express it.

Much of The Souvenir Part II involves Julie searching—for answers about Anthony, for a replacement to her lost companion, for artistic clarity. She visits Anthony’s parents and friends, hoping for answers. She has a random sexual encounter with a young actor (Charlie Heaton), which refreshingly breaks the taboo of having sex during menstruation. She becomes all doe-eyed around her hunky editor (Joe Alwyn). None of these encounters do much to refine her feelings except to suggest that she should search within. Still, when she shifts the subject of her graduation project to be about her relationship with Anthony, her instructors question the “lack of precision” in her screenplay and unfocused ideas. What Julie realizes about herself, in part due to advice from her producer (Jaygann Ayeh), is not that she lacks discipline but that she has a perspective. If she relies on her instincts and follows her interests, instead of creating the type of art that she thinks others will approve of, the result will feel genuine. 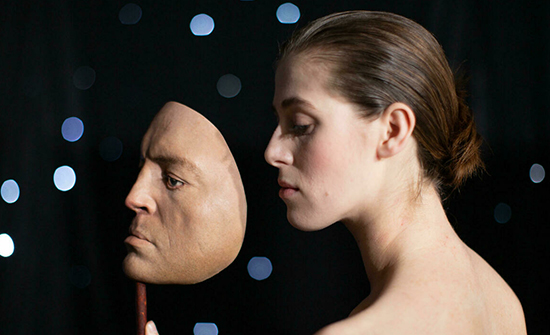 Although this sort of drama about an artist finding their voice is typical in cinema, it’s rare to find such a film about a woman. Through her personal account, Hogg investigates how some women don’t have the opportunity to express themselves as freely as men. In a tragic subplot, Hogg considers the lives of Julie’s parents, Rosalind (Tilda Swinton, Swinton Byrne’s mother) and the oblivious William (James Spencer Ashworth). Fulfilling the reserved British archetype, William appears detached from Julie’s creative drives, whereas Rosalind secretly cuts her substantial checks to fund her projects. Rosalind’s evident creative impulse, suppressed to fulfill her obligations as a respectable mother and member of her class, emerges in her sudden interest in pottery. She takes a college course and creates “artifacts” that she proudly uses around the house. Then Julie breaks her mother’s first creation by accident—William jokes it was “vandalized,” a term that rings true for Rosalind—revealing, in a sublimely subtle scene, the resentment that Rosalind feels for her daughter’s uninhibited ability to create. It’s a masterfully restrained piece of acting and directing that cuts into the complex mother-daughter relationship.

When production begins on Julie’s grad film, the first-time director stumbles along, feeling her way through the creative process. She also realizes that such an intuitive, almost impressionistic approach causes frustration for her actors and crew, especially the cinematographer who wants Julie to follow her script and provide a shot list. The resulting film, laughably bad from an outsider’s point of view, looks like a self-consciously arty student film that aspires to be experimental and referentially film savvy. Appropriately, it’s a little clunky but deeply felt, much like Julie. Moreover, it’s the beginning of Julie’s confidence as an artist and woman learning to trust her instincts. Swinton Byrne’s performance captures every unsure gesture and hesitation in Julie’s speech and body language, creating a wholly lived-in character that never feels like the work of an actor. It’s rather unbelievable that she has only three acting credits to her name.

Of course, it should be noted that The Souvenir is a strange film to earn a sequel. When so many sequels today belong to franchise fare and intellectual properties, here are two films that didn’t make a bundle at the box office and don’t have mainstream appeal. But they’re films by an artist with a personal story to tell, and they have found their modest audience outside of the multiplex—almost conspicuously so, since both played almost exclusively in arthouse theaters or limited release. But I point out this strangeness, not as a critique but rather to celebrate that Hogg chose this avenue to tell her story. Like so many other film workers today, she could have used the longer-form venue of a limited series or negotiated a deal with Netflix. But Hogg chose cinema out of her affinity for and the uniqueness of the theatrical experience. Moreover, film is the medium for which she trained, and that personal relationship comes through onscreen—particularly in the final meta moment.

The Souvenir Part II feels designed for film people, even more than its predecessor. The relatable account of Julie’s maturation as a woman and artist proves universally relatable, but the specifics of cinematic expression have a particularity that makes both films resonate. For all the absurdity of Ayoade’s character, he offers a few kernels of truth about the subject of film: “Wouldn’t you want to be on a soundstage, in widescreen, rather than here?” For Hogg, this must be an accurate statement. She has chosen to tell her story on film in a way that blends her life and interests in an expression of art and emotion. It boasts dreamy imagery courtesy of cinematographer David Raedeker and sharp editing by Helle le Fevre that cuts into the ’80s pop songs on the excellent soundtrack. The aesthetic feels hand-crafted and genuine in every moment. This is Hogg’s best film and her most personal and self-reflective statement as a director.