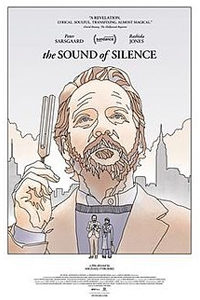 Most people grow out of ear infections when they’re children. I never did. To this day, I have had at least one ear infection per year. It’s a chronic condition that has required several mastoidectomies, countless sets of short-term ear tubes and longer-term, tympanostomy tubes. There’s also the constant tinnitus, the sharp ringing that emerges in a quiet room where, without ambient sound, it can be deafening. As a result, my ears have a hypersensitivity to sound. I hear subtle effects in the background others cannot, and loud noises often startle me. Watching The Sound of Silence, about a “house tuner” who looks for ambient tones or frequencies that may cause psychological side effects in his New York clientele, I was intrigued by the concept and felt personally invested. But rather than digging into the idea or exploring how sound actually affects our lives, this character study just begins to crack the surface of its subject before ending after a mere 88 minutes.

Michael Tyburski makes his feature debut, expanding his 2013 short film “Palimpsest” by about an hour. It’s an assured first effort, with production designer Nora Mendis and cinematographer Eric Lin creating a beige world of subtle, muted tones. The visual aesthetics reflect the soundscape, where pings of evidence remain hidden in the flat, autumnal world inhabited by Peter Lucian (Peter Sarsgaard), who calibrates homes the way a professional would tune a piano. He’s a character reminiscent of Gene Hackman’s protagonist in The Conversation (1974), a wire-tapper fixated on audio clues to the exclusion of all else. Although he is not a scientist trained by academia, he studied musical theory and reflects on the power of sound like a liberal artist. “The silence is full of sound,” says Peter, who continues to work on a project to map the harmonics of New York—the financial district is in the key of D minor, Central Park is G major, and so on. Peter’s status as just-shy-of-legitimacy has left him yearning for approval from scholars, yet he’s also resentful toward anyone who doesn’t acknowledge the originality of his work.

The film centers on Peter’s involvement with a client, a woman named Ellen (Rashida Jones) who feels depressed and exhausted. She learns about him from friends (Alex Karpovsky, Tracee Chimo), who appear in a single, clumsy expository scene in which they read about Peter aloud from an article in The New Yorker, which earns him some credibility. When she finally meets him in a neutral public space rather than her apartment, he explains, “It can be difficult to talk about a relationship problem, in this case your apartment, with both parties present”—as if the apartment were listening. The root of the problem seems to be Ellen’s toaster, which emits an E flat, and when combined with other sounds in her apartment, it results in a C minor, the “sound of resignation” that has shaped Ellen’s personality. But even days after correcting the issue identified in his diagnosis, Ellen has not improved. Instead, she’s intrigued by Peter, leading to a predictable if unearned romance in offbeat indie mode. 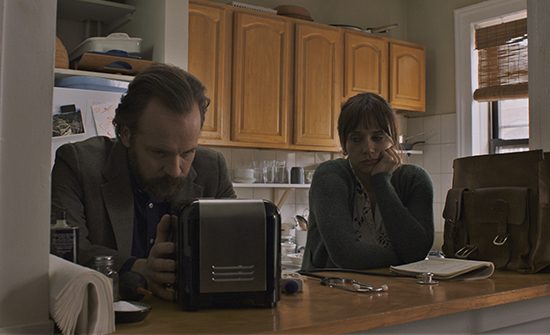 The scenes involving Peter’s search for professional validation remain more interesting, implanting some question as to whether his work has any real foundation. Advised by a professor (Austin Pendleton) who dismisses many of his conclusions, Peter floats on the periphery of academia, unwilling to change his methods to earn credibility and prove what he already knows to be true. But a teaching assistant (Tony Revolori) thinks he should try to publish and agrees to assist, seeing the commercial prospects of Peter’s research. At one point, Peter is offered a job opportunity to extend his unique approach to living spaces into a marketable service, but he’s so caught up with whether or not his work is understood that he sabotages himself. “This is about universal constants, not commerce,” he argues, taking a stance he will later regret. Indeed, Peter isn’t just trying to improve the lives of his clients by making housecalls; he attributes all human behavior to a complicated harmonic pattern that guides us, and he feels that all existence is “written” by sound.

But just as The Sound of Silence begins to strike notes of Darren Aronofsky’s Pi (1998), another film about a fanatical pseudo-scientist who believes the entire universe functions on a ruling principle, Tyburski stops exploring. The film takes a superficial view of Peter, as it does most of its characters. It avoids penetrating too far into his psyche, perhaps because he’s the kind of person whose strangeness is interesting until his inflexibility and obsessions prove scary. For instance, the film never deals with how Peter records his conversations with Ellen and listens to them again later, as if he missed some crucial element. What would Ellen think of this? Tyburski avoids any high-toned material, preferring to keep things on a low-key note. But the director mistakes long scenes of Peter sitting and listening with an inquiring expression as substance, though they don’t amount to much. And so, the film feels incomplete and undercooked, as though either the reveal of Peter’s theory about the universe running on an order of frequencies or the promise of Peter and Ellen’s romance would be a fitting narrative conclusion.

Sarsgaard’s quiet performance deserves credit for giving Peter the look of someone who might be on to something, as opposed to a complete crackpot. The performance is particularly good in the later scenes, especially one where Peter approaches the editor of an academic journal. Suddenly the calm certainty he has maintained throughout the film gives way to the character’s desperation, an aspect of Peter’s personality the film narrowly investigates. Sarsgaard has a presence that always seems to have an inner life, but Tyburski barely explores it, leaving the viewer wishing we had learned more. The Sound of Silence has a confident look and audio schema. The soundscape designed by Grant Elder and Ian Gaffney-Rosenfeld consists of enhanced ambient sound, tinny chimes, the occasional Bach recording, and loud intrusions from the city. But aside from its technical accomplishments, it’s a film that piques the viewer’s interest yet ends just as it starts to hint at more beneath its premise.