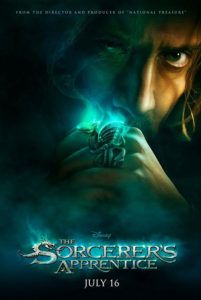 Disney’s The Sorcerer’s Apprentice follows a medieval wizard named Balthazar (Nicolas Cage) in modern times as he searches for the last living descendant of the Arthurian sorcerer Merlin. He finds the prophesied ‘savior of the world’ in David (Jay Baruchel), a dorky physics enthusiast with trouble talking to girls. Taking David under his wing, Balthazar teaches him the ways of magic to fight the evil sorceress Morgana (Alice Krige) and her devoted minion Horvath (Alfred Molina) bent on destroying the universe. The PG-rated movie was directed by National Treasure helmer Jon Turteltaub, whose attempts at lending this adventure any sense of filmic magic fizzle out during the prologue.

In what feels like twenty minutes of pre-plot exposition, the opening recounts the history of Balthazar and the purpose of his quest until we’re dizzy with pointless details. Basically, we learn that Morgana intends to raise an army of the dead and obliterate everything if she’s ever released from her magical prison, which has the form of a Russian nesting doll. Whenever movie villains have no ambition greater than destroying all creation, you can bet they won’t succeed, if only because their goal is unrealistic, so their plans to reach their objective are probably just as impractical. After all, let’s say Morgana did succeed. What then? With everything destroyed, what does she intend to do when there’s no one else around? Wouldn’t it be more pragmatic to try for merely enslaving all of humanity? At least then there would be something left for her to rule over.

Anyway, this is just one example of the childish terms in which the screenplay for The Sorcerer’s Apprentice was written (by five credited writers). Another example is how David must realize that in order to resolve his conflicts as the protagonist—save the day, get the girl, what-have-you—he must develop self-confidence. Already typecast newcomer Baruchel once again plays the nerdy nice guy who underestimates himself, not unlike the character he played as his first major leading role in She’s Out of My League only a few months ago. The young actor’s annoying presence grates in scenes with his love interest, Becky (Teresa Palmer), mostly because his naw-I’m-too-awkward-to-be-cool act has already outlived its appeal, if it ever existed. Having pigeonholed himself into such a typecast persona so early in his career, no doubt he’ll have trouble finding roles outside of this model later on. Imagine a fortysomething Baruchel twenty years from now still playing the nerd who can’t talk to women. If he doesn’t explore his range, it’s doubtful his career will last that long.

Much like Pirates of the Caribbean: The Curse of the Black Pearl, this co-production between Disney and Jerry Bruckheimer stakes a claim on a random fragment from Disney pop-culture and expands that idea into a full-length feature. With Pirates, they based their scenario on the popular theme park ride. Here the source is “The Sorcerer’s Apprentice” segment in Fantasia, where Mickey Mouse attempts to practice magic but finds himself overwhelmed by enchanted mops. That famous scene is paid an unfortunate homage, with Baruchel struggling to control a whole slew of enchanted cleaning utensils for slapstick effect. But instead of an orchestrated Paul Dukas score to accompany the movie, there’s modern pop music only familiar to the preteen Disney Channel crowd.

Of course, Nicolas Cage should be a blast shooting plasma bolts from his hands and raising fire from the earth. If any actor could simultaneously make such magic tricks look cool, but also look like he’s having fun doing them, it’s Cage. Alas, Turteltaub’s direction doesn’t bother dwelling on impressive action or magic scenes, and the movie’s editing is too choppy to allow Cage any prolonged fun onscreen. What’s more, the movie is called The Sorcerer’s Apprentice not The Sorcerer, so Cage’s mentor role takes a distant back seat to the uninvolving and conventional Baruchel character. It’s unfortunate, because Cage is capable of greatness yet rarely does the actor seek it out. For every great film like Adaptation or Bad Lieutenant: Port of Call New Orleans, there are a dozen washouts like Ghost Rider and Bangkok Dangerous.

As suggested above, Turteltaub doesn’t bother to construct remarkable action sequences or even a sense of wonder to highlight the magic world. He’s too preoccupied with keeping a fast pace and supplying no end of comic relief, even if it means the story and action are unintelligible. We spend little time exploring the possibilities of Balthazar’s ability, and David doesn’t do much more than shoot balls of light from his hands. With endless potential at the fingertips of the story’s magicians, the filmmakers forgot to ignite our imaginations with the movie’s magic world. Much like Prince of Persia: The Sands of Time, Disney’s other big-budget live-action summertime dud from this year, The Sorcerer’s Apprentice reeks of the filmmakers compensating for their lax story with an overabundance of underwhelming special effects.

The whole movie seems to spill out onto the floor in a stinking mess, and when it’s over the audience is left to ponder how—given its expensive price tag, notable stars, and an admittedly interesting premise—the result could be so awful. Every plot point is predictable; every performance misfires; Turteltaub’s direction shows oversimplification at every turn. What’s more, there isn’t a single action sequence or special effect, not one, that audiences will be awed over and talking about when they leave the theater. How low has Hollywood sunk when they don’t even bother with the frills on their mindless entertainment?