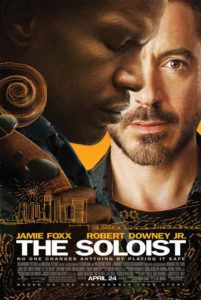 Here’s a film with major talents in front and behind the camera. But when watching it, we gradually realize they’ve been assigned to the wrong project. However promising the names attached and however capable their individual efforts on this film, both their presence and the end product feel somehow misplaced when arranged together. Part of the problem is the lackluster plainness of the central narrative, which presents a bland Hollywood recipe; though, these otherwise fascinating characters deserve better than this film’s clichés.

The Soloist is a safe drama, utterly harmless in its storytelling and at times rather moving. Erin Brockovich screenwriter Susannah Grant adapted the book by real-life Los Angeles Times journalist Steve Lopez, whose popular and lively columns on the troubles in skid row encouraged awareness and political action a few years back. Lopez is played by a quick-witted and sarcastic Robert Downey Jr. in his most affecting role since his post-Iron Man comeback. Lopez spends his days in the slums scouring for his next subject, and in L.A.’s Pershing Park, he finds Nathaniel Ayers (Jamie Foxx), a homeless man playing Beethoven on a violin with two strings.

Ayers appears frocked with layers of grimy-yet-colorful clothes gathered from wherever, speaking in nonsensical stream-of-consciousness sentences that reveal his clear schizophrenia. When Lopez learns Ayers formerly attended Juilliard until his mental condition took over, the writer finds his next story. His columns on Ayers generate attention, inspiring a sympathetic reader to send in a used cello for Ayers to play. Lopez takes care of his subject from a distance, moving him into the social services Lamp Community, where he hopes Ayers will receive help. But as flashbacks demonstrating his progressively degenerating mental state show, Ayers is likely beyond diagnosis and treatment; he just needs a friend.

Foxx is wonderful in his role, and Downey Jr. makes a perfect troubled narcissistic writer with bonding issues who works through his own problems while trying to help Ayers. We haven’t seen this kind of depth from Downey Jr. for some time, and we need to see more of it. Catherine Keener appears in a fictional editor-and-ex-wife role to help the Lopez character understand the meaning of it all. Keener does the role justice, but the part doesn’t help the film at all. Grant makes Lopez’s emotional growth transparent, and the flashbacks serve little purpose beyond showing us what we already know in more detail.

And yet, director Joe Wright—whose earlier work on Atonement and 2005’s Pride & Prejudice deserves high praise for its fluid camerawork and attention to emotional detail. He elevates the material, despite possibly being the wrong man for the job. Consider the scene where Lopez takes Ayers to a concert rehearsal, and the music gradually turns the scene into a reactive, glowing light show. This is beautiful stuff, whereas later, a silly sequence follows Ayer’s cello music throughout L.A.’s cityscape via a computer-generated dove. Yet, well-crafted as Wright’s compositions are, not even his polish can clear away the sappiness of Grant’s writing.

Though the various fragments of The Soloist do not congeal in the way they should, the viewer still appreciates the individual parts: Downey Jr. and Foxx’s performances. Wright’s graceful camerawork. The color schemes. The touching examination of L.A.’s some 90,000 homeless. But even when stepping back, the connected pieces don’t come together to form a flawless picture, mainly because of the generic script. Best labeled human interest moviemaking, this film was written as an inspirational experience with all the schmaltz of your local news broadcast’s “story behind the story” segment, only it doesn’t go too far behind the story to make it exceptional. It’s a potentially powerful little examination of human life that doesn’t look too closely, remains enjoyable for the duration, but unfortunately, fades from memory as soon as it’s over.