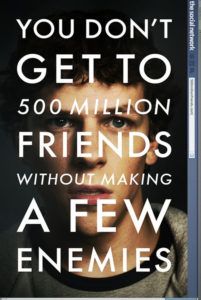 The Social Network is an unlikely triumph. After all, the film’s subject, being the creation of the internet’s most popular networking website, Facebook, would hardly suggest the materials necessary to produce a narrative worthy of cinema. Perhaps an MTV-produced movie, but certainly not cinema of the quality that requires the talent involved here. And yet, director David Fincher and writer Aaron Sorkin, both authorities in their craft, elevate what could have been popular fodder into a serious, entertaining, and engaging drama that, through its depth and insight, regards business and social existence in the digital age with a critical eye.

Based on Ben Mezrich’s book The Accidental Millionaires, Sorkin’s script could have been limited by the public knowledge that Facebook’s creator, Mark Zuckerberg, currently runs the site and remains extremely wealthy to this day. But instead, the story becomes an enthralling tale of how it all went down and the players involved, seasoned with a hearty dose of Sorkin’s signature dialogue—filled with sharp quips and witticism that never slow through the film’s enduring banter and angry blow-ups. Whether or not each and every fact within the film accurately represents what really happened, no one except those involved can be sure. But when much of the story derives from actual depositions from the lawsuits portrayed in the film, there’s no doubt that a great deal of truth is here.

In 2003, insecure yet acerbic Harvard University student Zuckerberg (Jesse Eisenberg) dreams of creating something that will impress the Final Clubs, elitist groups that he hopes to join and believes will lead to a better life. But more than impressing these secret societies, he hopes to defy them out of spite and jealousy. So when he’s approached by the Winklevoss twins (Armie Hammer) to develop a Harvard-exclusive online group, he vaguely agrees to their proposal but in the meantime develops his own such network with far vaster aspirations. These scenes represent website coding in more technical detail than any other film has ever shown and make Zuckerberg’s skill an indication of his admitted technical genius. Backing Zuckerberg is his sole friend, Eduardo (Andrew Garfield), who serves as CFO and fronts all the cash needed to get the site running. But Eduardo quickly learns of his partner’s selfish motives when the equally motivated-by-insecurities Napster creator, Sean Parker (Justin Timberlake), helps expand their Facebook site, ignorant of the consequences that ensue in the form of lawsuits.

Eisenberg’s talent turns Zuckerberg’s snide behavior and superior smugness into the traits of a vulnerable whiz kid pained by his own insecurities. The actor has played this sort of neurotic, acid-tongued intellect before, but never with such intensity. His Zuckerberg manages to be an incredible jerk without altogether losing the audience, in part because Eisenberg is a likable actor, and in part because Sorkin’s script is filled with humor. There are constant laughs through irony and prickly, backhanded insults that, in a way, make The Social Network the best, blackest comedy in recent memory. Of course, there’s a definite dramatic weight, in that Eisenberg carries the tone and even the underlying message of the film on his shoulders. His character reminds us that social life on the internet is, in the end, for the emotionally insecure and angry, as epitomized by his creation of Facesmash.com after he’s dumped in the fantastically layered opening scene by his girlfriend (Rooney Mara, who has earned the starring role in Fincher’s adaptation of The Millennium Trilogy, due sometime next year). 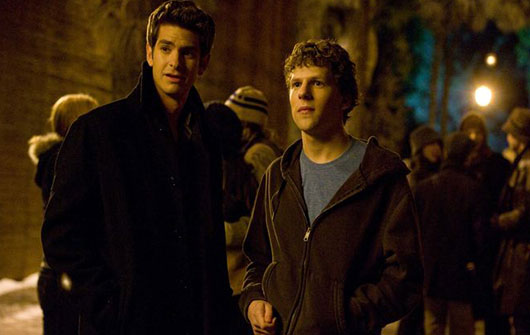 However, the breakout performances belong to Andrew Garfield (the new Peter Parker in Sony’s Spider-Man reboot) and Justin Timberlake. The naïve innocence and nobility of Garfield’s Eduardo earn our sympathy once he’s “left behind” by Zuckerberg, but he also makes some poor business decisions, such as trusting Zuckerberg anywhere near Parker. The British actor from The Imaginarium of Doctor Parnassus and Red Riding: 1974 loses any trace of an accent in his performance and completely disappears in the role. Playing Parker, Timberlake is marvelously despicable, cocky and paranoid, and representing the worst in Zuckerberg through his desperate attempts to stick it to the establishment, but via reckless and childish behavior. Parker’s out-of-control ego in comparison helps to humanize Zuckerberg, who through the course of the film approaches the edge that Parker has long ago passed, but doesn’t. Or, if he does, he at least feels some semblance of regret.

Zuckerberg’s lesson becomes telling, in that his thoughtless behavior toward his sole friend, Eduardo, represents the detached mentality of internet communication and friendship on Facebook. Should a friend become too needy or impede on your precious time or assert their needs over yours, dismissing that friend becomes easy as clicking “Ignore”. No confrontation needed. Zuckerberg learns the harsh lesson that real life doesn’t work that way. The film condemns this behavior through Zuckerberg’s financial gain and subsequent personal regret with the oddly poignant last scene, where Zuckerberg refreshes a web page, desperately looking for someone to connect, someone to notice him.

Fincher was an unlikely choice for director given his previous output and attraction to both visually and thematically darker material such as Se7en and Fight Club. Given the mainstream popularity of such social networking websites, his highly stylized approach seems like it would be out of place, and positively contrary to Sorkin’s body of work. Fincher is known for his brooding subject matter, meticulous visuals, extended shots, and desire to move the camera in ways that, without his invisible augmentation by computer effects, would otherwise be impossible. His work here best compares to his brilliant 2007 film Zodiac, in that both follow characters on the cusp of discovering a great mystery and the related intrigue. And yet, Fincher’s direction lends the picture undeniable gravity. Moreover, absorbing us further into the story is Trent Reznor’s electronic score, his first alongside Atticus Ross, and hopefully not his last.

While Fincher’s direction is superb, it’s the marrying of his visual style with Sorkin’s writing that makes The Social Network a great film. Sorkin delves into intellectual property laws and website coding lingo; Fincher’s moody, caramel-saturated lighting stylizes the material. Sorkin engages his characters in a sparring of words; Fincher maintains the film visually through dynamic angles and bravado camera movements. Together, somehow, they have complementary styles, making up for each other’s artistic flaws by supporting their relative strengths. Fincher has chosen narratively substandard fare before (think Alien 3 and Panic Room) and improved it through his concentration on visuals and mood. Sorkin’s ongoing streams of dialogue are sometimes paired with a lifeless visual tone (his television work). Combine them, and the outcome achieves a perfect visual and intellectual balance in a film that defines, dissects, and raises questions about how the Digital Age communicates.