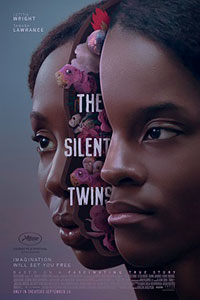 The Silent Twins, based on journalist Marjorie Wallace’s 1986 non-fiction book of the same name, could have been adapted into a generic biographical film. The lives of June and Jennifer Gibbons, identical twin sisters who grew up in England and Wales and who communicated to no one else but each other for most of their lives, have been the subject of several straightforward TV spotlights, books, and even a play. But Polish filmmaker Agnieszka Smoczyńska and screenwriter Andrea Seigel turn the story into a hybrid: part by-the-numbers drama, part arthouse fantasy. The two strains seldom congeal into a singularly cohesive film, but it’s difficult to deny the narrative’s sheer emotional impact or the director’s visual achievement. Anchored by two central performances from Letitia Wright and Tamara Lawrance—who play June and Jennifer, respectively—the film’s portrait of interiority remains harrowing and formally inspired.

The opening title sequence suggests the film to follow will break boundaries in unexpected ways, delivering something unconventional and self-reflexive. Leah Mondesir-Simmonds and Eva-Arianna Baxter, who play the preadolescent twins in the early scenes, read aloud the stop-motion-animated credits, chatting amongst themselves and giggling at how the names sound. The loose, hand-crafted quality of these initial scenes never returns later in the film. However, June and Jennifer write fiction and journal entries, and the filmmakers bring their writings to life in similar touches—at times recalling this year’s Mad God, complete with warped dolls, grotesque surgery scenes, and other nightmarish imagery. These dreams, including a music video interlude, feel lovingly rendered and are likely why Smoczyńska signed on to her English-language debut. Moreover, such moments hardly seem out of place for the director, whose 2015 debut The Lure tested genre limits with its status as a horror musical about a mermaid cabaret.

Another strain of the film involves the twins’ behavior at home and in school. Failed by the UK’s educational and mental health systems, the two girls of color also faced severe institutional racism and a colossally bad judgment from the courts. As a result, they rarely break their self-imposed no-talking rule throughout their time in a special education school with a sympathetic teacher (Michael Smiley), nor even when separated from each other in a disastrous experiment. However, the filmmakers curiously avoid addressing the discriminatory facets at play, which makes their reasons for silence unclear. Scenes of bullying and impatient teachers don’t begin to mine what the sisters faced in real life, which robs the film of social impact. And so, the unfamiliar viewer gathers that their silence and limp-bodied reaction to being handled stem from a performative protest. But why they continue their codependent behavior with, say, their older sister and parents remains unclarified. 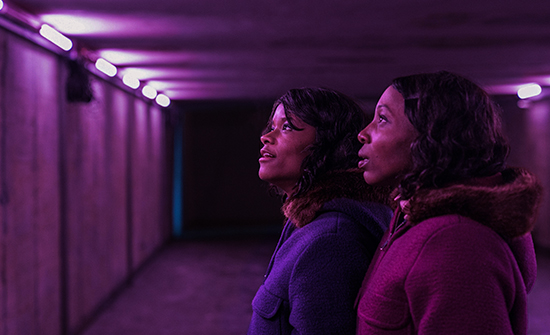 Wright and Lawrance take over the roles during June and Jennifer’s late teenage years to their late 20s, a period that finds the sisters exploring their passions and acting out. Both prolific writers, they attempt to get published, only to receive a pile of rejection letters. So they resolve to combat rejection with romance and engineer new experiences for inspiration. Enter Wayne (Jack Bandeira), a reckless army brat who introduces the sisters to smoking, drinking, sex, and sniffing paint thinner. The experiences are enough to inspire June to write a book, The Pepsi-Cola Addict, published at a vanity press, but no one close to her except Jennifer knows about it. Although their inhibitions drop and they speak around Wayne, his behavior eventually reinforces their worst anxieties about other people, sending them into a spiral that lands them both an indefinite stay in Broadmoor psychiatric hospital.

With Poland standing in for the twins’ hometown of Haverfordwest, the drab exterior scenes appear perpetually overcast and gray. Smoczyńska and cinematographer Jakub Kijowski use these everyday scenes to create a stunning contrast inside the twins’ life of the mind. Colorful sequences of stop-motion animation and luminescent blue or purple-pink light lend a dreamlike quality to the sisters’ inner experiences, which are based on the actual imagery found in their writing. These sections unfold in slow motion and have uncanny splashes of color, often cutting away to a stop-motion metaphor for life. For instance, the sisters imagine themselves as parrots, trapped in a cage and studied by onlookers. Smoczyńska is clearly more interested in these scenes, which have a vitality that sustains us through the more conventional sequences. But they’re all too brief. In the end, no one understands what June and Jennifer have been concealing for so long until a reporter, Wallace (Jodhi May), seeks out June because of her published works.

Although The Silent Twins takes the viewer inside the heads of June and Jennifer Gibbons, it also keeps us at a distance, perhaps to replicate their lifelong alienation. Much like Wallace, we can only look upon their behavior and creative works as outsiders, and then appreciate how these two young women built elaborate worlds and even a language together—all because the real world couldn’t be bothered with understanding them. Smoczyńska captures their internal and external lives in individual scenes, but the shifts between the two extremes never find a rhythm. With one foot in, one foot out, the film doesn’t commit, leaving us to yearn for a stranger film (reminiscent of 2006’s Tideland, perhaps) and sing Smoczyńska’s praises for not delivering something more mainstream (like A Beautiful Mind, 2001). Above all, Wright and Lawrance shine as the distinctive and mysterious sisters, and they make us appreciate how some subjects can never be fully understood.