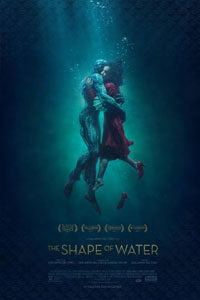 Guillermo del Toro’s fascination with classical monsters, fringe genres, outcasts, and Gothic romance continues in his beautiful fairy tale, The Shape of Water. The director’s many-sided interests have produced imaginative, dark stories that draw from and combine the most unlikely of sources, often resulting in something visionary and unique. Some of his finest work involves ghost stories, the limits of a child’s imagination, or occult adventures. Whatever the topic, del Toro blends familiar ingredients into a curious potion. Even his lesser efforts seem inspired, having been mixed into captivating failures. But The Shape of Water deserves a place alongside The Devil’s Backbone (2001) and Pan’s Labyrinth (2006), perhaps even seated somewhat above them, as another essential work by the Mexican auteur. Although much of his output enters the realm of expertly crafted entertainments (his Hellboy series, for example), every few years del Toro releases a small, passionate motion picture that demonstrates his considerable emotional reach within peculiar material. The Shape of Water seems to combine those two strains into a singular film.

Set in 1962, the film opens on the tired routine of Elisa (Sally Hawkins), a member of the overnight cleaning staff at a government research lab in Baltimore. Though she’s mute, her friend and coworker Zelda (Octavia Spencer) talks enough for them both. A new “asset” arrives at the facility under the careful guard of Richard Strickland (Michael Shannon), a cruel, square-jawed federal agent with a cattle prod, his chosen tool of torture. Locked inside a water tank and chained by the neck, an amphibian man (Doug Jones), captured in the Amazon, will be studied by the sensitive Dr. Hoffstetler (Michael Stuhlbarg) to determine how it can be used in the space race against the Russians. Elisa learns the creature is intelligent and innocent, but also strangely beautiful. She brings it hard-boiled eggs and plays it jazz music. She teaches him (the creature is male) to sign, but they communicate more through their shared longing and feelings of exclusion from “normal” society. About the moment she falls in love, she sets out to free her gilled inamorato from his shackles and escape the grim fate Strickland has planned. 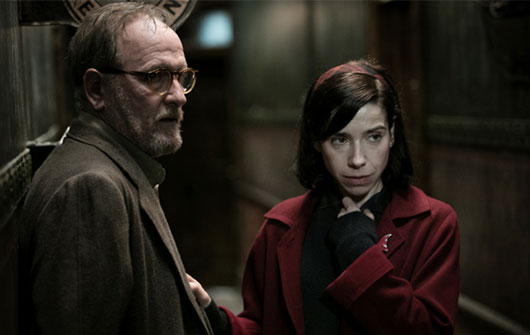 The Shape of Water’s basic setup is deceptively simple, whereas the screenplay by del Toro and Vanessa Taylor enriches the material through intricate details in the lives of its characters. Giving her best performance since Happy-Go-Lucky (2008), Hawkins’ brilliant, near-silent turn relies on her expressions and body language that capture her character’s vivid internal life, and her reluctance to share it. Since others see her as “incomplete” because of her inability to speak (a malady she’s had since infancy, when she was an orphan), she identifies with other social castaways—her African-American friend Zelda, or her gay neighbor Giles (Richard Jenkins). But Elisa also yearns for romance, love, and physical attention. And the story finds time to explore the three-dimensional lives of the film’s main characters, complete with a look into their carnal side. When the inevitable happens, and Elisa explores that side of herself with her newfound friend, the sexuality feels tender and warm, as opposed to grotesque, which is what one might think of when considering human-creature relations. But del Toro relies on a legacy of storybook links between humans and non-humans, and this Beauty and the Beast tale has no need to transform its monster into an attractive prince.

Del Toro’s fairy tale ambitions become apparent early on, with Giles’ voiceover in the first scene. He sets the stage in “the last days of a fair Prince’s reign” referring to JFK, and fancifully labels Baltimore as “a small city near the coast but far from everything else.” The narration describes Elisa as “the princess without voice,” and her “tale of love and loss” features a “monster that tried to destroy it all.” Our assumption, established by storybook archetypes, place the amphibian man in the role of the monster. But del Toro turns those prejudices upside-down, questioning the otherwise heroic, classical, and American ideal—especially given the 1962 backdrop during the Red Scare. This was an age when the civil rights of countless Americans (people of color and members of the gay community) were oppressed, and del Toro’s sympathies lie with such individuals—not the culture that marginalizes them. The director and his film champion the socially displaced, creating an alternate fairy tale that reverses or altogether abolishes traditional roles.

Perhaps this is why Strickland proves such a diabolical, and pointedly American, presence. Flourishing on the Cold War-era ideology that un-American and non-Christian are evil, Strickland is sharp and cruel, paranoid and, ultimately, perverse. (Does anyone do manic paranoia better than Shannon? Not after Bug.) “You may think, ‘That thing looks human.’ Stands on two legs, right?” he says to Elisa and Zelda of the amphibian man. “But we’re created in the Lord’s image… Some more than others,” he adds, looking at Zelda—a line bound to incite a vocal response from the audience. Later, we learn about his home life. He has a homemaker wife and two kids living in a suburban idyll; he’s thinking of buying a Cadillac; he reads books on positive thinking; and yet, he has plenty of vices. Between popping pills from an ever-present bottle, he keeps his mouth busy with hard candies. He also has an affinity for utter silence in the bedroom, which spurs some workplace sexual harassment for Elisa. Given his racism, sexual misconduct, and unapologetic American exceptionalism, Strickland is the perfect modern villain. Or maybe he just represents a Cold War-era type that, in today’s political environment, has reemerged. 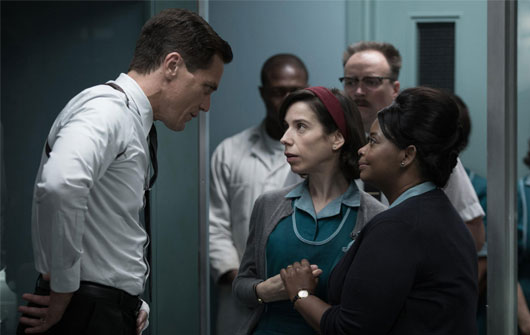 Shannon’s intimidating performance, one of his best, is balanced by the humanity of Giles, Zelda, and Dr. Hoffstetler. Jenkins is delightful as a would-be advertising painter who, along with Elisa, lives above a movie house that shows Biblical epics. The film’s efficient use of its two hours finds time to explore Giles’ situation, how he lost his former job, probably because of his sexuality, and how he clings to a fantasy of making a love connection with the clerk at a local pie shop (the outcome is hardly a dream-come-true). Zelda, capably handled by Spencer, has been given just as much dimension. She complains about her lazy husband all night at work, where we learn about the details of her marriage, and when the film follows her home in a crucial scene later on, those casual gripes have a significant emotional heft. Stuhlbarg also lends surprising depth to Dr. Hoffstetler, lending his sensitive voice and kind eyes to his scientist role. Although Dr. Hoffstetler proves to be an “enemy of America,” his character also sees the beauty of the film’s beast and fights for his survival.

Having starred in most del Toro films, Doug Jones has played the mischievous Pan, an eyeless Saturn, a ghostly spectre, the Angel of Death, and often more roles than one in any given film—but always unrecognizable beneath makeup or elaborate body prosthetics. Of course, his closest performance to his role in The Shape of Water is the amphibious, egg-eating charmer Abe Sapien in the director’s two Hellboy films. Regardless of his costume, the actor’s mannered, almost ballet-like movements are unmistakable. Behind this film’s dazzling and mostly practical costume (some of the underwater scenes are accomplished with convincing CGI)—complete with frog eyes, double eyelids, gills, and fins—Jones gives a performance that communicates the essential idea of the film: this is not a monster but an intelligent, thoughtful creature capable of love and understanding. The performance and incredible design of the creature go beyond the guy-in-a-suit reality of the character, creating a fleshed-out personality and presence.

Along with his marvelous creature designs, as always, del Toro’s craft proves visionary and full of rich textures and colors, except here achieved with a modest budget of less than $20 million (even though the film looks better than most studio blockbusters). A viewer could watch The Shape of Water for the production design alone. Damp and weathered surfaces show greens and earth tones in all their eventual rot, while bold reds (in blood, movie theater seats, and Elisa’s clothing) present a striking contrast. Dan Laustsen, the cinematographer of del Toro’s last film (the underrated 2015 horror-romance Crimson Peak), shoots in seaweed-colored darkness touched by glimmering light to reflect the pervasive water—the constant rain, shallow pools the amphibian man calls home, and enthralling underwater scenes. But Laustsen also indulges del Toro’s trips back to classic Hollywood, capturing the black-and-white reverie of Elisa’s dreams. Similarly, the makeup effects used to achieve some of the grislier moments (like most del Toro pictures, the film is bloody) find a black-purple color for two putrified digits that will make the audience cringe in something between disgust and phantom pain. 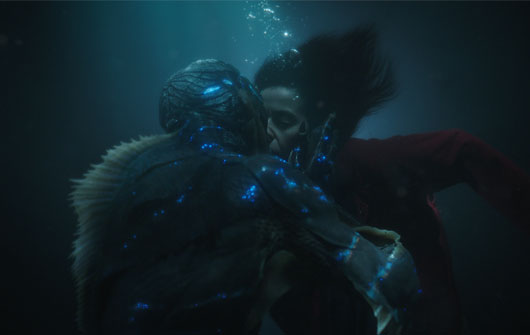 For those fortunate enough to have seen the director’s touring show “At Home with Monsters”—featuring some of del Toro’s prized paintings, replicas, comics, literature, and memorabilia selected from his collection at Bleak House in Los Angeles—The Shape of Water may seem wholly representative of his output, in a way few individual films before this have been. Del Toro remains nostalgic for film history and passionate about pop-culture. Those influences have informed his work since his 1993 debut, Cronos, and remained a constant companion in his films. In his latest, the director’s love of classic Hollywood monsters, specifically the design for Universal’s The Creature from the Black Lagoon (1954), becomes evident. But then so does his affection for elaborate, gorgeously staged black-and-white musicals, which Elisa and Giles watch on his television set, leading to the aforementioned monochrome dance.

Fairy tales, paranoid thrillers, intimate love stories, creature features, and morbid myths have informed Guillermo del Toro’s film. Similar to Crimson Peak, there’s a resounding sense of romanticism beneath The Shape of Water, but without some of the tonal confusion (unfairly) associated with that film. With a narrative that resonates in unexpected ways, the film offers a showcase for the talents of its stunning ensemble cast, especially Hawkins, who embodies innocence without becoming a symbol or losing her humanity. Whether or not he intentionally channels disturbing modern-day parallels, del Toro has achieved arguably his most “Guillermo del Toro” film to date, surpassing even Pan’s Labyrinth in the film’s relevancy. Both universal yet on the margins, his disturbing, heartening film bears the soul of a romantic and the perspective of an outsider. The Shape of Water won the Golden Lion at the 2017 Venice Film Festival, and accordingly, it looks like a studio film but plays like an independent film, achieving a rare balance between mainstream and pure arthouse. A picture that represents its director’s complete vision, achieved with perfect visual and narrative clarity, The Shape of Water is an enchanting, unforgettable experience.