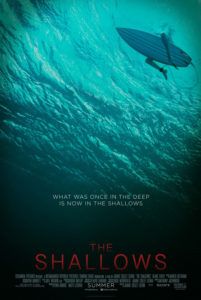 After helming a trio of increasingly dull Liam Neeson thrillers (Unknown, Non-Stop, and Run All Night), director Jaume Collet-Serra attempts something comparatively minimalist with The Shallows. It’s the story of a resourceful young medical student, played by Blake Lively, whose soul-searching vacation to Mexico gets interrupted when a Great White shark claims a secluded inlet as its hunting ground, leaving her stranded two-hundred yards from shore. Aside from a few supporting characters-turned-victims, the movie is just the woman and the shark. And while the story’s potential for gut-wrenching suspense and cinematic bravado forces one to consider what Hitchcock or DePalma might’ve done with the material, very quickly we’re reminded that Collet-Serra isn’t nearly as innovative.

After her mother passes away following years of fighting cancer, Lively’s Nancy heads to a secret beach, hidden behind rough jungle terrain. Having secured a ride with a local, Nancy spends the drive on her smartphone, scrolling through old pictures of her mother on the very same beach, and texting her friend, who remains hungover back at their hotel. Meanwhile, the driver reminds her to look up from her phone at the beauty of the forest. Instead of pointing the camera where Nancy’s eyes should be, Collet-Serra projects her phone’s pics and texts onto the screen, filling the frame with digital information and later a video chat with her father (Brett Cullen) and younger sister (Sedona Legge). The movie’s reliance on digital screens in the face of natural beauty is annoying, to say the least. More on that later.

Before long, Nancy catches some waves in shots that look excerpted from a future Mountain Dew commercial, except it’s painfully, laughably obvious the filmmakers have digitally imposed Lively’s face onto a female stunt surfer. Later in the day, Nancy notices a huge dead whale floating nearby, and when she investigates, she’s bitten on the thigh by a shark who’s feeding on the whale’s carcass. She quickly swims to safety on a nearby rock and uses her medical training to secure her wound. Stuck there with a seagull whose wing was damaged during the fracas, Nancy must fight her way to survival. Anthony Jaswinski’s script attempts some emotional stakes, linking Nancy’s predicament to her late mother’s fight, but the character never becomes more than two-dimensional at best.

At the same time, the preponderance of digital animation in The Shallows is distracting and, finally, ruinous on the audience’s ability to lose themselves in the material. Nancy’s seagull friend, whom she talks to throughout her time on the rock, serves the same purpose as Wilson the volleyball from Cast Away. However, for many shots, the bird is digitally rendered to distracting effect. The production also used CGI to create the killer shark, flares from a flare gun, and some of the backgrounds—leaving us with the sense that very little of the movie was actually real or shot on location (in Australia, reportedly). Of course, the budget was a mere $17 million, and CGI allows directors to control what happens on their set and what appears in the frame, especially for a difficult water shoot. So it’s understandable, but the execution is shoddy and inferior.

By the time Nancy gives her “I’m going to fight to survive!” speech to the GoPro camera mounted on a helmet belonging to one of the shark’s victims, The Shallows becomes unintentionally funny. The movie hopes to chart Nancy’s spiritual journey to overcome the death of her mother, but that dramatic strain never quite works, leaving the movie to end on a schmaltzy note where everything’s going to be just fine. This annoyingly saccharine quality incites a gag reflex when the end-credits song, “Bird Set Free” by Sia, blares in our ears and overstates an already overemphasized theme. After all, it’s not like a movie about a lone woman fighting for survival against a killer shark was going to end with her being eaten.

Meanwhile, Jaswinski’s script was probably about 60 pages long, if the rule that each page of action accounts for one minute of screentime. Collet-Serra saturates his 87-minute movie in slow-motion and shots of Nancy looking ponderously into the sky. Of course, many of these shots have been designed to ogle Lively’s attractive physique, which, aside from a surfing jacket, is barely covered by a two-piece bikini for the duration. Nevertheless, someone should track the amount of screentime where something actually happens, because it feels like a lot of it is filler. Also frustrating is how the shark isn’t given a personality; even the mindless killing machine in Jaws seemed to have character, or a myth behind it, largely because the human characters talked about it. There’s no such discussion here, not even between Nancy and the gull, so it feels like another of the movie’s empty CGI creations. In the end, The Shallows may contain a few occasional shocks, but this is indeed surface level stuff.