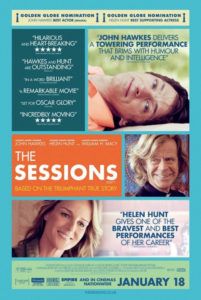 Mark O’Brien contracted polio as a child and, at 38 years old, having spent most of that life in an iron lung or on a gurney for the three or four hours he’s allowed outside the chamber, he resolves he wants to experience sexual intercourse. He has sensations all over his body and is capable of maintaining an erection, although he’s unable to move. But then, being unable to move hasn’t stopped him from leaving his hometown of Boston for Berkeley, CA, where he studied writing at university and writes poetry and articles for a living. After interviewing other disabled people about their sex lives for a magazine assignment, Mark is left with the feeling that his time is running out, and sex becomes something he deeply wants to experience. As for his proposed partner, Mark loves three women, and each has a significant role in his life. Sadly, all three women aren’t given equal importance in The Sessions, writer-director Ben Lewin’s film inspired by the real-life Mark’s 1990 article, called “On Seeing a Sex Surrogate.”

In a performance that will surely win him awards, John Hawkes (Winter’s Bone) plays Mark on his back, his body thin and unmoving, almost always shot horizontally. Mark finds his first love is Amanda (Annika Marks), his caregiver, who quickly realizes Mark is a sweet, thoughtful, funny man one could easily fall for. Incapable of returning the love of someone in his condition, Amanda leaves him. Alone and dejected, Mark turns instead to the possibility of a sex surrogate to work through his unique situation and understandable anxieties around sex. A religious man, he consults a confessor and friend, Father Brendan (William H. Macy). Despite the Catholic Church disapproving of intercourse outside of wedlock for any purpose other than reproduction, Father Brendan thinks God will grant Mark “a pass” in this situation. Morally absolved, Mark proceeds and hires Cheryl (Helen Hunt), a sex therapist who allowed only six consultations with Mark to develop and work through his sexual insecurities.

The majority of the film falls on these sessions, Mark’s fearful moments before them and the sometimes mortified, sometimes elated moments after. As Cheryl works with Mark, Lewin engages in frank, sometimes mechanical discussions and depictions of sexuality, but is wise to never show the full acts. These scenes only become sensuous as Cheryl briefly allows herself to enjoy the experience when her feelings, which should be disconnected, begin to grow for Mark. The film’s nakedness and forthright considerations of sexual acts have an antiseptic quality that suggests a welcome openness to the material. Lewin’s structure also builds to some natural peaks, allowing any modest members in the audience to acclimate. All the while, Lewin resists eroticizing Hunt’s body or framing her as an object; that she is naked is merely a fact of the circumstances. Hawkes and Hunt shed their clothes and spend much of their screentime naked, but they bare much more by way of their characters’ aching intimacy together in later scenes.

Uncharacteristic for what might become 2012’s indie darling, The Sessions contains a delicate, open, and sensible attitude toward sexuality, not something often found in American film. This also is rare among movies accustomed to using sex in promotion of lesser “kiss kiss, bang bang” motives. Not uncommon, however, is this R-rated film’s predominance of female nudity, which brings into question the one-sidedness of the film’s attitude toward sexuality. On the other hand, Lewin examines the potentially taboo subject of disabled people having intercourse in a matter-of-fact way that breaches the topic by rendering it a non-issue. Human beings have basic and natural drives, and no matter what may hold them back, they’ll find a way to connect. Still, one cannot help but wonder if the story belongs to Mark or the subject of sex.

Earlier in the review, I mentioned that Mark loved three women: Amanda and Cheryl were covered, and the third is Susan (Robin Weigert), who he eventually marries. Lewin cuts the film short before exploring Mark and Susan’s relationship; emotionally, this abrupt conclusion doesn’t allow audiences to process all that happens in the hasty prologue. Surely one can make the argument that it’s called The Sessions not because this is Mark’s life story but rather his touching experiences with a sex surrogate. But if that’s the case, including Susan at all feels unnecessary and dramatically curtailed, leaving her character undercut by the profound impact Cheryl, a married mother and responsible sex therapist, left on Mark’s life. Lewin’s short, 95-minute feature would have benefitted from a few added scenes exploring Susan’s impact, if only to demonstrate how Cheryl allowed Mark to function in a healthy romantic relationship. In the end, The Sessions feels like an incomplete experience, even while being an admirable piece of drama that boasts two outstanding performances.