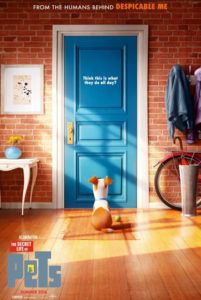 In The Secret Life of Pets, Illumination Entertainment preys on those of us with a penchant for anthropomorphizing our furry friends. Many pet owners create voices for their domesticated animals, and here’s a movie in which pets speak in those voices, behaving in ways only humans could imagine for them. Although it takes place in a world where humans own pets (as opposed to a Disney-esque world like Zootopia, in which talking animals fill human roles), the movie explores, for a while anyway, what our dogs, cats, and other pets are up to when people aren’t around. Co-directors Chris Renaud and Yarrow Cheney take what could have been an effortlessly simple idea and, in typical Illumination fashion (they’re the studio behind Despicable Me and Minions), dumb down the material for the lowest common denominator. Not that The Secret Life of Pets isn’t diverting and occasionally funny or cute, but the result lacks distinctiveness and creativity, standing as nothing more than an animated bauble.

Illumination’s longtime writers Cinco Paul and Ken Daurio teamed with Minions screenwriter Brian Lynch to conceive an idea closely tied to Pixar’s Toy Story, at least in its initial concept. Once humans aren’t around, pets drop their well-behaved pretense and inhabit their own microcosm, just as Woody and the gang did when Andy left his room. And for the inspired first few minutes of the movie, we see this secret world on display; however, most of these moments were already shown in the trailers, whereas everything that follows is a lot less interesting. Like Toy Story, The Secret Life of Pets follows a top dog, here embodied by Max, a floppy-eared terrier of white and brown, voiced by Louis C.K. (a choice that adds more to the character by association). Max feels threatened by a new canine arrival in his owner’s New York City apartment. Rather than Buzz Lightyear, Max’s owner, and modern day Olive Oyl, Katie (Ellie Kemper), brings home a shaggy brown rescue dog named Duke (Eric Stonestreet). Jealous, and immediately at odds with Duke, Max plots to get rid of his new housemate. But the story is never more complicated than Max trying rid himself of Duke, getting lost and eventually kidnapped in New York, and then later needing to team up with Duke to return safely home.

All the while, the movie’s characters rarely move beyond mere tropes, and never become more than, at best, two-dimensional constructs. The cast of characters offer a fine cross-section of animal types by design, if only to reach every available pet owner type in the audience. There’s the food-obsessed cat named Chloe (Lake Bell); a dachshund named Buddy (Hannibal Buress); a guinea pig with no internal compass, voiced by Renaud; a woodsy old Bassett Hound named Pops (Dana Carvey, once again playing “The Grumpy Old Man” from SNL); a hawk named Tiberius voiced by Marlin himself, Albert Brooks; and a dozen other side and background characters who fill the scenery. Their hook firmly in place with the animal gimmick, the filmmakers rely on observational humor and the occasional unexpected disparity for laughs. The highlights remain a poodle who spends his afternoons listening to death metal, an evil bunny named Snowball (voiced by Kevin Hart) with a Master Plan to rid the world of humans, and a prissy Pomeranian named Gidget (Jenny Slate) with secret kung-fu abilities.

The pets themselves exhibit familiar behaviors and thoughts we commonly recognize in our pets—or at least, behaviors and thoughts we project onto them. They speak in the voices we imagine them using, and they say things we imagine them saying. It’s an approach almost anyone can identify with, tediously so. Consider the central friendship of Max and Duke, two dogs with simple desires: food, getting home to Katie, but not necessarily maintaining friendships with fellow dogs. The script fabricates a thin alliance between them only after the two bond over sausages galore during an admittedly funny sausage factory sequence. Nevertheless, a bond formed over sausages alone isn’t much of a bond at all. Very quickly in the proceedings the filmmakers dispose of this Toy Story-light setup, and the movie devolves into a series of mindless chases, poop jokes, and fast-paced action, all delivered at a rate too recklessly swift to allow emotional resonance.

Present throughout, Alexandre Desplat’s jazzy score feels underused compared to the string of pop hits on the soundtrack: N-Trance’s “Stayin’ Alive” cover, Bill Withers’ “Lovely Day”, “We Go Together” from the Grease soundtrack, and so on. Despite the occasional animated anus, the visual style resists photorealism and leaves its characters looking like plastic, puffed-up creatures with tiny legs and big mouths. The scenery looks brighter than bright, distractingly so. Each character appears as though Illumination’s promotional toy companies played a major role in their design, and each has been constructed for maximum cuteness—the idea that propels most Illumination features, specifically Minions.

Watching The Secret Life of Pets, I was reminded how two far better films about animals, Disney’s aforementioned Zootopia and Pixar’s Finding Dory, opened earlier this year. I gave both films positive reviews, but not four stars, largely because I wasn’t overcome in a similar way as I was with other Disney and Pixar films. Perhaps this was a mistake. Viewers, myself included, have a bad habit of taking those studios for granted. Not until a contrast such as The Secret Life of Pets arrives are we once again reminded that the efforts of studios like Illumination are middling next to the major animation houses. To be sure, when they’re not completely stealing from Toy Story, Illumination relies on gutless, mundane, family-friendly animation—the kind of movie that opens with a Taylor Swift song and ends in a twenty-minute chase. When you compare The Secret Life of Pets to the works of Disney and Pixar, the division of quality separates them further. Disney and Pixar’s efforts feel much better than they were at first, and Illumination’s movie seems much, much worse.