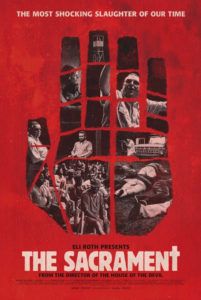 If you’ve ever said “don’t drink the Kool-Aid,” then chances are you’re at least vaguely familiar with the  Jonestown Massacre, the 1978 mass suicide that serves as the uncredited basis for Ti West’s new arthouse horror film, The Sacrament. Although this faux-documentary involves religious extremism to mirror Jim Jones’ doomed People’s Temple in Guyana, it’s not horror in the strictest of terms and has much to consider about brainwashing in religion, politics, and the media. This film follows West’s recent period-styled efforts, The House of the Devil (2009) and The Innkeepers (2012), and becomes his most accomplished, well-rounded production yet. Eli Roth serves as producer, reteaming with the director after West helmed Cabin Fever 2: Spring Fever (2009), the sequel to Roth’s 2002 original that West disowned after losing creative control to the studio. West demonstrates a careful control of his menacing territory, with a familiar cast of faces from fellow indie horror gurus, many from You’re Next and the V/H/S series.

Investigative reporter Sam (AJ Bowen) and videographer Jake (Joe Swanberg) run an independent media outfit called “Vice” and attempt to portray difficult topics with “honest subjectivity”. For their latest assignment, they’re helping their New York fashion photographer friend Patrick (Kentucker Audley) locate his drug-dependent sister Caroline (Amy Seimetz). After entering a sober-living community, Caroline joined a clandestine religious community at an undisclosed location somewhere in another country. When the film opens, Patrick receives a letter from his sister inviting him to visit her new home at a commune called Eden Parish, and he decides to bring the “Vice” boys along to document the trip. But when they arrive in what is presumably a South American country (Guyana perhaps?), they’re greeted at the gate by men with machine guns. Caroline promptly arrives to diffuse the situation, ensuring all is well with a sunny, energetic demeanor and enthusiasm about the place. Sam and Jake are unconvinced, but Caroline reassures them that, once inside, they’ll see first-hand what a paradise their leader, named only Father, has constructed.

While Patrick goes off to catch up with Caroline, Sam and Jake are encouraged to walk around the compound and explore. They interview various residents, all of whom dwell in humble bungalows and live off the earth with no electricity and modest medical facilities. Everyone seems happy, devoted to their church, to their way of life, and especially to Father. Sam and Jake are almost convinced of this alternative lifestyle, until the mother of a mute little girl suggests that their interviews have only been with people that Father wants them to interview. As for Father himself, they’re granted a half-hour Q&A session, but it’s an interview conducted onstage before the entire congregation. Played by Gene Jones and looking just a smidgen less crazy than Marlon Brando in The Island of Dr. Moreau, Father is a wormy fat man behind sunglasses, sweat on his brow, and an infectious smile among his devoted followers. His Southern charm is backed by a shrewd intelligence, granting him the cunning to deflect Sam’s questions and turn them around on the interviewer by way of carefully veiled threats.

The interview is a disturbing, understated scene, and it’s followed by a gut-wrenching third act that commences when the aforementioned mute girl delivers a note to Sam and Jake that says, “Please help us.” What works best about The Sacrament is how long into the runtime West maintains the film’s slow-burning suspense, pushing our dread to the maximum until it’s almost unbearable. Unlike his previous efforts where a similar tactic was used, the payoff, as we know from Jonestown, contains no shortage of sheer terror given what happens next. And while we know what’s coming when we see Kool-Aid being mixed, seeing it play out is incredibly disturbing given how normal everyone at Eden Parish looks—a collection of senior citizens, weathered middle-aged parents, and their young children. Of course, Eden Parish’s population of 100+ followers is just one-ninth of the casualties at the actual Jonestown massacre, and as a result, West’s film leaves us more interested in the real-life story (see the PBS documentary Jonestown: The Life and Death of Peoples Temple from 2006).

West wrote, directed, and edited the film, which contains little of the droll humor he usually perpetuates; fortunately, the film makes up for it in loose commentaries and themes what it lacks in witty humor. But if The Sacrament contains any major faults, they’re involving its pretense as a documentary that soon becomes a “found footage” yarn. This device and sharp execution by cinematographer Eric Robbins are particularly effective and consistently used in the opening half, but when things go south in the climax, there’s much shaky-cam visual confusion, including some shots that feel unexplained given how events unfold in the finale. But these quibbles go with the subgenre’s territory and shouldn’t be counted too heavily against The Sacrament, which is otherwise a tense thriller about religious extremism and a promising step into a more advanced brand of horror filmmaking for West.