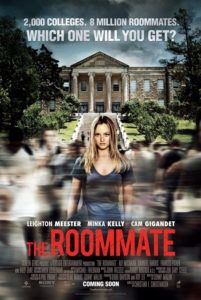 The Roommate provides a showcase for beautiful people to act, quite badly, according to a script that offers nothing except formulaic suspense. Young television stars Leighton Meester (Gossip Girl) and Minka Kelly (Friday Night Lights) lead a cast of college “hotties”, one of them a downright psycho with obsessive tendencies. It’s your standard Single White Female setup, with one college roommate fixated on another. But nothing too appalling occurs in this mostly inoffensive, PG-13 rated thriller. The movie was made for tame crowds out for safe chills and a predictable outcome, and that level of banality is exactly what’s delivered.

Aspiring fashion designer Sara (Kelly) arrives at the faux University of Los Angeles and learns she’s sharing a room with the socially awkward Rebecca (Meester). Sara’s new friends immediately know something is wrong with Rebecca, because she doesn’t want to be called “Becca” or even “Becky”. Indeed, a surefire way to tell someone should be ostracized is their aversion to nicknames… Anyway, turns out Rebecca has some mental stability issues. She grows consumed with Sara, clinging to her. Soon Sara finds that Rebecca is wearing the same clothes, the same jewelry, and getting the same tattoo as her. Eventually, Rebecca eliminates any competition from others who might draw Sara’s attention away (including an ex-boyfriend, a new boyfriend (Cam Gigandet), and a kitten). Sara’s oversimplified, manic behavior escalates to predictably violent extremes, peaking with a slapdash finale involving a tied-up victim, a gun, and a window.

Given the fashion-themed backdrop of sorts, everyone in the movie looks like runway models. Kelly’s ever-glossed lips are only second to the rampant tanning evident on every castmember, except Meester, who’s singled out for her pale (read: not orange) completion. Stylist namedropping and working references to The Devil Wears Prada into the script feel even sillier. Even Sara’s top fashion design professor, played by a sleazy Billy Zane in a beret, looks like a model—though his student-harassing crimes strangely don’t make him a casualty in Rebecca’s reign of terror. In fact, there’s a surprising lack of gratuitous death for such a low-rent shocker. And since the filmmakers obviously didn’t have artistic integrity in mind, it’s curious that they spared a body count.

Those of us familiar with Single White Female, Barbet Schroeder’s tidy 1992 thriller starring Bridget Fonda and a menacing Jennifer Jason Leigh, might accuse the movie of carbon copying Schroeder’s scenario and reformatting it for modern audiences. And we’d be right to make the accusation. Every moment of this movie feels lifted from another, better one, yet recycled to include a “hip” cast capable only of wooden acting and a certain dumbing-down for today’s youth crowd. Take the scene where Rebecca, lit only by a faint lamp, digs into a chair with a box cutter; the image can’t help but recall a similar scene from Fatal Attraction. Though filmmakers today have almost no way to avoid borrowing from their predecessors, the line between inspiration and derivation was crossed here, resulting in transparent thievery.

Helmed with utter ineptitude by Danish director Christian E. Christiansen, the production value is predictably low-budget, as titles like The Roommate aren’t made to last—only to fill enough seats on opening weekend to turn a profit. The bland presentation feels downright boring, shot without style or imagination. And it wasn’t until reading other reviews for the movie that this critic realized it wasn’t just bad projection in his screening; the movie is indeed grossly underlit by cinematographer Phil Parmet. The dark presentation gives the viewer a sense that they’re wearing sunglasses, or perhaps 3D glasses, which ultimately produce the same dimming effect. There’s no telling what’s going on in some night scenes. Not that it matters—screenwriter Sonny Mallhi has not one surprise up his sleeve.