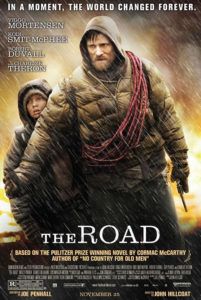 They walk together on abandoned and barren highways cracked by time, under a sky of limitless gray, heading for the coast, to the ocean where their hope resides. Completely on their own, there is no government or societal infrastructure of any kind. Devastation is the only constant. Trees are lifeless and bare, and they will never sprout buds again. They fall from time to time. Soon there will be none at all. Eating insects and stumbling upon cans of food is their only saving grace. Humanity has been reduced to a few remaining stragglers, so they must tread carefully, as other survivors have grown into desperate and violent reflections of their unforgiving environment.

This is the landscape of The Road, the film by director John Hillcoat and adapted by screenwriter Joe Penhall, based on Cormac McCarthy’s novel. The world depicted is a pitiless wasteland wherein characters have no names and speak little dialogue. The story follows The Man, played by a leathery and intense Viggo Mortensen, and his son, The Boy, played by Kodi Smit-McPhee. Long passages without much sound are interrupted by sharp, terrifying realities. Underneath every scene, there are fear and apprehension, a sense of danger that’s infectious. Watching the film causes an unsettling physical unease. But it’s also incredibly moving in its endurance amid despair.

As to what caused this apocalypse, the film does not say. Perhaps it doesn’t matter, not with the brooding narrative about survival before us. There were fires. Now the sky is filled with ash, and snow mixes with the ash to make sort of a gray mud. The Man endures because he must, if only for the sake of The Boy, and that’s what matters. He carries a gun loaded with but two bullets. Is this for protection? Or will the bullets be used for something else should that time of absolute hopelessness and desperation come? Perhaps, if it weren’t for the presence of The Boy, The Man might’ve already emptied one of the chambers. But he has to keep moving and maintain “the fire” of humanity as long as he can. In their surroundings, they seem to be the only source of humankind left. Everyone else has reverted to a savage animal state, scratching at and killing each other for survival in any way possible.

Good guys don’t eat people. That’s The Man’s motto that he passes along to his son. The Bad Guys, then, resort to cannibalism for survival. They’re a carnivorous bunch, moving in aggressive clans along the road, scouting the woods for travelers to capture and kill. “Cannibalism is the great fear,” says The Man in his narration. When humanity begins to feed on itself, it becomes circular and suicidal as a species. Cannibalism renders humanity no longer progressive, but self-destructive, whereas The Man and his son make for the seacoast. The ocean has always been a symbol of hope for land explorers, an ultimate destination. And humanity has always defined itself through our ability to reach new frontiers. Cannibalism eliminates that idea completely. 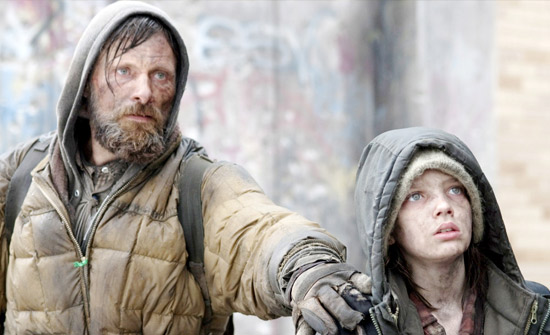 Memories are the only refuge for The Man. He recalls a more colorful time with his wife (Charlize Theron), amounting to an ambiguous subplot best explained as his only escape. Thinking of her is his sole diversion from this world, but memories are also painful. She was unwilling to fight as he was. What, after all, are they fighting for? Why go on when the weather just keeps getting colder? When The End is so evidently near? These memories of her trouble his existence. He says that dreaming about bad things means you’re afraid, so you’ll keep moving forward; dreaming about good things means you’ve resigned to your fate and now wish to escape. He’s been dreaming a lot lately.

The performances in the film seep off the screen with their grit, yet they simultaneously radiate with authority. Mortensen and Smit-McPhee appear grimy and tired, so much so that their appearance makes the audience uncomfortable just watching them. Mortensen looks awful, cracked and beaten and thin. He has subtly transformed his body once again, just as he did with A History of Violence and Eastern Promises. The Man feeds his son before himself, so Smit-McPhee, a symbol that the future may have some promise, looks healthier, but ragged nonetheless. The desperation never leaves Mortensen’s eyes, and if this isn’t the performance that earns him an Oscar, it would be a major blow to the integrity of the award.

Hillcoat shot the film in over fifty locations, including post-Katrina New Orleans for a look of utter desolation. The presentation is nothing less than convincing, as the environment feels like another world entirely. His actors give wonderful performances; worn faces like those of supporting actors Robert Duvall and Guy Pearce belong in films like this. And yet, readers of McCarthy’s book may note that, the faithful adaptation aside, there’s something lost in translation. This is not a criticism of the film in any way, simply an acknowledgment that McCarthy’s—what some would call “unfilmable”—prose doesn’t allow for complete cinematic translation. Too often viewers compare the book to film, forgetting that they’re two different mediums with two separate ways of telling stories. Hillcoat tells this story in the best way any filmmaker could.

But admittedly it takes time to appreciate Hillcoat’s work, as well as McCarthy’s. The director’s only previous film was The Proposition, an Australian Western from 2005 written by Nick Cave. McCarthy’s novels range from dark tales like No Country for Old Men to the brutal historical pieces like Blood Meridian. They’re both artists of dense material. It’s a challenge for the viewer or reader to chisel through the layers and eventually see the whole image of their works, the external presentation along with the insides all at once. Some viewers are bemused during The Proposition or still baffled by the Coen Brothers’ adaptation of No Country for Old Men; many readers won’t even approach McCarthy’s writing because they’re lost in the references and metaphor throughout (despite his work being approved by Oprah’s Book Club).

Approach The Road cautiously. Plan to see it twice—once to familiarize yourself with its unconventional, non-commercial method of storytelling, and a second time that allows you to submerge into the material, to appreciate how stunningly composed it is. Let the film consume you both in tone and its spare aesthetics. Allow yourself to grow as silent as the characters, to be as fully affected by the environment as they are. The film is terrifying and powerful, and it will surely mature over time, growing more complicated and meaningful with every viewing. It’s a picture that demands effort and patience from the viewer, which when given provides an experience both rewarding and haunting.