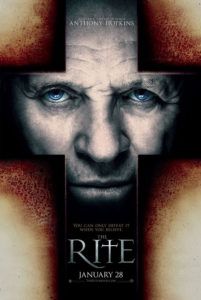 Two ambiguous movie qualifiers precede The Rite, the new horror drama from Warner Bros., the studio that brought you The Exorcist more than three decades ago. The first you’ve seen before; it’s that ever-elusive “inspired by true events” preface whose meaning never quite captures how far Hollywood has embellished the real story for mainstream audiences. The second you may not be so familiar with; it says “suggested by” the book The Rite: The Making of the Modern Exorcist by journalist Matt Baglio. The book covers how Baglio met Reverend Gary Thomas in a Vatican-sponsored course on exorcism, then shadowed Thomas as he trained under a veteran exorcist. In the book, Baglio and Thomas set out to dispel false impressions of exorcism propelled largely by the movies.

With that in mind, the film “suggested by” Baglio’s book begins with that same purpose, but quickly falls into familiar, ludicrous territory. As with many films that use exorcism as a key plot element (most recently The Last Exorcism), a major theme here is doubt, if only so later, when the situation degrades into an exhibition of pure horror, it feels all the more realistic. The young protagonist, Michael Kovak (Colin O’Donoghue), has left home and escaped his domineering mortician father (Rutger Hauer) to become a priest. Michael has no more faith, however, and plans to leave seminary school when he’s talked into taking a course at the Vatican. There he meets journalist Angeline (Alice Braga) who is investigating the truth behind exorcism.

Michael’s lack of faith earns him an apprenticeship under Father Lucas (Anthony Hopkins), a Welshman who’s performed countless exorcisms. But observing Lucas in action only solidifies Michael’s doubts; he clings to notions of psychiatry and science to explain away some very persuasive demonstrations, like when a warped patient vomits up iron nails. Michael remains unconvinced. “What’d you expect? Spinning heads? Pea soup?” Lucas asks. The doubting young priest clings to his skepticism, until he’s forced to face a demon head-on when Lucas himself is possessed. The finale tosses out any hope of realism when special effects and shoddy voice manipulation turn Hopkins into a taunting, black-eyed version of Hannibal Lecter.

In addition to turning Baglio into a sexy journalist to create romantic tension for the celibate protagonist, the screenplay by Michael Petroni (Queen of the Damned) exaggerates the hero’s loss of faith to achieve a forced dramatic breakthrough. (Apparently, the real-life association between Baglio and Thomas wasn’t formulaic enough.) This is unfortunate, since Petroni’s take on the material starts off by building a plausible character study through facts about real exorcisms. Michael’s reservations about exorcism lead to some interesting truths about how the Catholic religion addresses the issue in today’s modern society. For example, the film tells us the Vatican has assigned an exorcist to every diocese around the world, which is a rather staggering notion given that exorcism has been denigrated into a horror movie cliché by Hollywood. Such truths are squandered later when Petroni’s script turns into the very cliché it seeks to dismiss with the over-the-top finale, ruining, with a preposterous climax, any hope the movie had of convincing the audience that exorcism is anything but fantasy.

Shot with considerable style by Mikael Håfström, the film employs creepy sounds and devilish laughter to unnerve the viewer. At times the result is quite unsettling, but as the story progresses and becomes increasingly reliant on run-of-the-mill shocker tricks, those same devices become silly and pathetic—and frankly far too restrained (the studio no doubt toned down the material to earn a PG-13 rating). The Rite shows so much potential in the first two-thirds with its character study pretense, offering (brief) appearances by actors like Hauer, Toby Jones, and Ciarán Hinds, and a lively turn by Hopkins as part-charlatan, part-genuine article. Yet much like Håfström’s last film, 1408, a promising and even impressive opening gives way to a final act that squanders everything that came before.