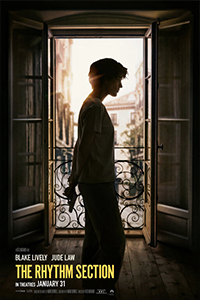 In The Rhythm Section, the twentysomething Stephanie Patrick has descended into a life of drug addiction and prostitution following the death of her family in a mysterious plane crash three years ago. The plane’s mechanical failure, as it turns out, resulted from a bomb planted by Islamic extremists. Upon learning this, Stephanie wants revenge. She escapes her life of debauchery and, in time, meets a discharged MI6 agent named Iain Boyd (Jude Law), who might have information that could lead her to those responsible. She asks Boyd to train her, give her the skills to get revenge. But Boyd tells her, “You’re a cliché,” in remarks that could serve as a critical assessment of the film. Played by Blake Lively, Stephanie makes a similar transformation as the heroes in La Femme Nikita (1990), Kill Bill Vol. 1 and Vol. 2 (2004, 2005), and Red Sparrow (2017)—from average women to killing machines. To be sure, The Rhythm Section is best described by drawing comparisons to other material. Later, Boyd gives Stephanie some advice about vengeance: “It’s not worth it,” he says. It’s another line of apt film criticism.

The Rhythm Section is Hollywood’s latest failed attempt to construct a franchise. It comes from author Mark Burnell, whose series of four best-selling books surely inspired Paramount Pictures to finance the project. The production company is Eon Productions, the Broccoli family institution responsible for almost every James Bond film in the nearly 60 years since Dr. No. Doubtless, everyone involved wanted the film to become the first in a series that would have supplied sequels for years to come. But as I write this, the opening weekend numbers have already doomed its performance—the word “bomb” has been thrown around a lot, and not in the context of the circumstances surrounding the deaths of Stephanie’s family members.

Burnell adapted his own book into the screenplay, his first, and the result seems like he forgot to account for the interior lives of his characters rendered in the prose. Reed Morano, a longtime cinematographer who has graduated to the director’s chair with a few small features (Meadowlands, 2015; I Think We’re Alone Now, 2018) and some television work (The Handmaid’s Tale, Halt and Catch Fire), applies a heavy hand. The story proceeds on a typical revenge film trajectory, first with Boyd’s ruthless training of Stephanie, who survives eight months of his strict but chummy instruction at his isolated Scotland compound. “You’re not made for this,” he keeps telling her, but she persists through several montages of running and firing ranges. Even so, Stephanie never completely sheds her vulnerability; she never loses her humanity to become a killing machine. That’s actually a plus, because it makes her bumbling through the ensuing missions all the more compelling. At the same time, her continued unpreparedness makes you wonder why Boyd ever thought she was ready for live field assignments. “I never thought you’d make it this far,” he confesses after she returns from her first mission. Then why did he send her out after investing eight months of his time in training her?

Anyway, the film takes Stephanie from one target to the next, traveling to Surrey, Madrid, Tangier, New York, and Marseille. In almost every location, she has a new disguise, accompanied by a distracting wig to conceal her Bob Dylan-esque mop of hair. Amid the missions, Morano and her editor Joan Sobel inject soft-filtered flashbacks to show Stephanie’s memories of her family, reminding the viewer of her motivations. It’s handled in a graceless way, often interrupting the film’s momentum to repeat images from her mind’s eye, the same few shots appearing again and again. Elsewhere, Morano can’t decide whether The Rhythm Section should be a grave tale about the morality of revenge (an undercurrent as her mission to stop the terrorists results in collateral damage) or a fun actioner on par with Atomic Blonde (2017). The music sends mixed signals too, from the funerary score by Steve Mazzaro to the odd assemblage of vintage pop tunes on the soundtrack, including “Dream a Little Dream of Me” by The Mamas and the Papas, “I’m Sorry” by Brenda Lee, and “It’s Now or Never” by Elvis.

Even the title’s meaning feels underdeveloped as a theme. Boyd tells Stephanie to “think of your heart as the drums, your breathing as the base”—a tactic that will bring her a sense of calm during moments of intense action. The film would have been better served by an audible heartbeat and breathing during action scenes, yet Morano never bothers to stress the title’s meaning. But then, there are plenty of unformed ideas in The Rhythm Section, such as passing references to Stephanie being a “top student at Oxford” or having a penchant for languages, neither of which the film uses. It’s unfortunate, if only because Lively gives a strong performance as our hero and Law makes for a convincing veteran spy. Aside from a few acting flourishes and a tense situation or two, the film is mostly undercooked and assembled without much vision. Missing out on the next three sequels is no great loss.