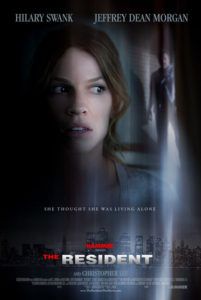 Remember in Alfred Hitchcock’s Psycho when Marion Crane first arrives at the Bates Motel and, for a while, everything seems normal? Norman Bates appears to be a quirky but harmless guy who’s just awkward around a pretty lady, making chit-chat and munching on candy, until that moment when Hitchcock takes us into Norman’s office. Norman removes a painting from the wall to gaze through a peephole at Marion preparing for a shower, the last of her life. Now, imagine that portion of the film extended into a feature-length thriller, relocated from the middle of nowhere to New York City, and starring Hilary Swank and Jeffrey Dean Morgan in place of Janet Leigh and Anthony Perkins. It’s called The Resident. It’s the latest from the newly invigorated Hammer Films, and it’s not very good.

Swank plays orange-tanned ER doctor Juliet Devereau, who after breaking up with her unfaithful boyfriend Jack (Lee Pace), looks for a new home in the Big Apple. She finds a refurbished apartment with an exquisite view of the Brooklyn Bridge, which the chummy owner-operator, Max (Morgan), along with his co-owner and grandfather August (Christopher Lee), is eager to give away for a cheap price. He warns her that the building gets bad cell phone reception (because, of course, she’ll need that information later on when she tries to call for help), then hands her the keys without checking her references. On her first night, she has an eerie feeling like she’s being watched. Ominous ink blot shadows might be a figure standing in her bedroom, might not be, and a subjective camera peers through a two-way mirror into Juliet’s bathroom and watches her bathe.

But who’s watching her, Max or his looming grandfather? There are no other suspects, unfortunately, because the building has no other tenants (some peculiar side characters could have livened the show up like the ones in Roman Polanski’s Rosemary’s Baby and The Tenant do). To make us squirm, Max and Juliet begin a flirtation, he creepily excited, yet with a charming energy about him, while she remains unsure if she’s really over Jack. Then, about fifteen minutes into the movie, director Antti Jokinen explains away our suspicions and guesswork through a sloppy rewind-replay effect, showing us, rather than letting the audience discover, Max’s horrible secrets since the movie began. Soon enough, Juliet decides that she still loves her ex and breaks it off with Max. As you can imagine, Max, the obsessive voyeur, doesn’t take this news too well.

Co-written by Jokinen and Robert Orr, The Resident has the beginnings of a good thriller, with its classic horror roots and Oscar-winning lead. It’s certainly more entertaining than The Roommate, a recent dud similar in content. Much of the problem here resides in the one-note characters designated to the common tropes of “damsel” and “psycho”, though Morgan is effective in his thinly described role, even if he’s too good looking, and his performance contains too much rocking and crying (if only we understood what he was rocking and crying about). But there’s neither a postscript psychological explanation nor even coherent hints at Max’s past to deepen the character (there are, however, a few incoherent ones). Swank, who also co-produced, seems more interested in showing offer her naked, thin frame than developing her character. It’s enough to know that she’s a victim, whereas Hitchcock spent a third of his film developing Marion Crane as a complicated woman.

The moment the filmmakers decided to give away their only secret with the sloppy total recall effect, they lose a good deal of suspense that could have prolonged and deepened this barely 90-minute feature. Instead, The Resident’s morbid take on a few minutes of Psycho loses steam and turns to drivel when, in the third act, a confrontation ensues and a nail gun plays a crucial role. The picture boasts excellent photography by Guillermo Navarro, frequent cinematographer for Guillermo Del Toro and Robert Rodriguez, so the polished camera movements are slick and the lighting moody and menacing. But the story lacks any of the ingenuity that a craftier Hitchcock impersonator, like Brian De Palma, could have given the material.