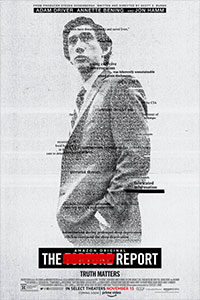 Scott Z. Burns assembles an excellent cast headed by Adam Driver for The Report, a tense procedural stripped of all affectation to lay bare the facts. A true story about an investigation in Washington, D.C. to uncover details about the U.S. torture program in the early 2000s, the film immerses the viewer in journalistic information. It gradually builds toward a picture of the truth, accompanied by a growing moral outrage, as the extent of the government’s crimes and their attempts to cover them up become apparent. The material feels like a quieter, more brooding exposé than a human drama or political thriller, though it earns comparisons to All the President’s Men (1976) and other 1970s films of that ilk. Much like Spotlight (2015), it takes a ripped-from-the-headlines story and plunges the viewer into a rapt pursuit of what happened. Though it lacks dimensional characters and melodramatic situations, The Report earns our admiration by relying on details to tell the story, and our understanding of their implications does the rest.

Driver stars as Dan Jones, a staffer on the Senate Intelligence Committee, who reports to Senator Dianne Feinstein (Annette Bening). In 2009, Dan is tasked with heading a nonpartisan investigation into the CIA’s use of EITs (Enhanced Interrogation Techniques) after the 9/11 attacks—a necessary inquiry since the Agency has destroyed the tapes of their interrogations. What’s left for Jones to examine, then? Just about 6.3 million pages of transcripts, emails, and official documents that must be pored over and decoded to grasp their meaning. The team starts with three democrats and three republican researchers, working in a locked, windowless room in a concrete CIA basement, where the Agency is not allowed to enter (that doesn’t stop them). Over the five-year investigation, Jones’ staff dwindles. The republicans leave for political reasons, while one democrat can no longer stand reading grim descriptions of the 119 detainees of Middle Eastern descent who were beaten and tortured—even though the CIA gained no original intelligence information from them. In contrast, the FBI’s rapport-building techniques have a proven track record.

Jones becomes obsessed with completing the report and ensuring it reaches more eyes than the members of his committee, his fury rising as he comes to grasp the extent of the torture and the CIA’s attempt to spin their tactics to the public. The practice begins with two former Air Force psychologists (T. Ryder Smith, Douglas Hodge), who have no experience in interrogation, yet throw the word “science” around to justify their program to “achieve compliance” through “learned helplessness.” Ultimately, they’re getting paid $80 million by the U.S. government to torture people and express their rage over 9/11. Their methods entail humiliation, waterboarding, mock burials, insects, and insult slaps to coerce detainees—practices so vile that the American Medical Association refuses to allow doctors to oversee the process because it would betray the Hippocratic oath. Meanwhile, the CIA, ever aware that “it’s only legal if it works,” puts out political spin to create the false impression that “enhanced interrogation” led to the death of Osama bin Laden—and Burns takes Zero Dark Thirty (2012) to task for adding to that erroneous narrative. 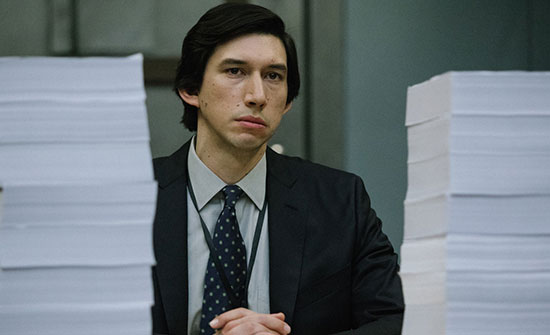 At about the midpoint of The Report, the story cuts into the political machinations that almost suppressed Jones’ completed report. Some refuse to read the nearly 7,000-page document because it’s too long, while Obama refuses to punish the CIA for their crimes because the capture of bin Laden got him reelected. Jones—a clean-cut Capital Hill lifer who’s never seen without a suit and tie, who has no personal relationships because he’s devoted himself to the report—goes from quiet rage over the contents of the report to indignation over the new head of the CIA, John Brennan (Ted Levine), attempting to file criminal charges against him. Burns handles these situations with cold distance, as cinematographer Eigil Bryld’s camera observes almost exclusively in medium shots rendered in muted colors under fluorescent lights. Most of the action takes place on Driver’s face, whereas Bening’s role has been reduced to paraphrasing complex ideas in more accessible terms for the audience (“You mean, yadda yadda yadda? Is that what you’re saying?”).

The Report debuted at this year’s Sundance Film Festival, where Amazon Studios acquired it for a whopping $14 million, no doubt expecting awards consideration similar to that of past Amazon buys such as Manchester by the Sea (2016) and The Big Sick (2017). After paying that much for the film, however, Amazon has relegated its theatrical release to a handful of theaters, followed by a heavy push on Prime Video—an approach not unlike the Netflix model. It may be a result of Amazon having paid top dollar for several high-profile pictures that went on to a disappointing box-office performance. This year alone, Mike Leigh’s brilliant but uncommercial Peterloo and Mindy Kaling’s Late Night failed to connect with a broad audience, at least during their theatrical distribution. Based on The Report’s limited exhibition and fast turnaround on the streaming side, it’s apparent that Amazon doesn’t believe in the film—or at least, doesn’t believe in the film’s ability to recoup wide distribution costs. This is a shame, as the film has the rare ability to open eyes, not unlike Errol Morris’ similarly-themed documentary Standard Operating Procedure (2008).

The Report feels less riveting that earlier political thrillers, if only because Jones remains an intentionally undeveloped character. But Driver’s blank slate protagonist allows the viewer to concentrate on the details, feeling steadily invested in how the facts begin to chip away at Jones’ calm; it’s a subtly calibrated performance in a year of excellent turns by this actor (see Marriage Story, The Dead Don’t Die, and The Man Who Killed Don Quixote). The rest of the cast, including Michael C. Hall, John Hamm, Tim Blake Nelson, Matthew Rhys, Corey Stoll, and Maura Tierney, give the film further clout. Burns, who also wrote The Informant! (2009), Contagion (2011), and Side Effects (2013) for Steven Soderbergh, directed only one other feature for HBO, Pu-239 (2006). But it’s evident that he’s well-versed in dramatizing real-world subjects, and The Report feels like essential viewing for a country with a chronic hesitance to look in the mirror.