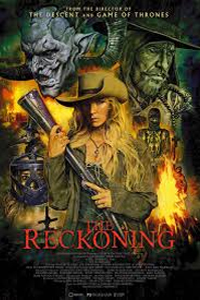 Neil Marshall often walks the line between greatness and trash. For every film like The Descent (2005) or superb episode of Game of Thrones (including “Blackwater” and “The Watchers on the Wall”), he delivers something unconscionable like Doomsday (2008) or the Hellboy reboot from 2019. Given his track record, he seems like the perfect director for The Reckoning. It’s the story of a woman accused of witchcraft in 1665, during London’s Great Plague. Meant as a harrowing account of female empowerment against the patriarchal authority and religious zealotry of the period, and so reflecting our times, the film’s themes are undone by a supernatural presence. Although it follows one woman’s resilience against the persecution of various men of power, its heavy-handed screenplay, general overacting, and misuse of a demonic character make the experience painful viewing—but not in the way Marshall’s fans would expect from his usual fantasy and horror output.

Written by Marshall, Edward Evers-Swindell, and star Charlotte Kirk, the movie follows Kirk’s character, named Grace, who loses her husband Joseph (Joe Anderson) to the plague. Joseph is exposed after a trip to the local pub, and he resolves to hang himself rather than expose his wife and child to the infection. His fate is shown in flashback, intercut with a labored, weepy sequence of Grace cutting Joseph down from a tree and burying him in the rain. Much of The Reckoning takes place in flashback, from the sex scenes wish Joseph she recalls in her grief to the time she told her husband that her mother was burned at the stake as a witch—prompting a flashback-within-a-flashback. Other characters experience flashbacks too. And sometimes, the screenplay leaps back in time just to deliver a story detail to the audience alone. If the movie is Grace’s narrative, it is a scattershot one.

Before the dirt on Joseph’s grave has had time to settle, their landlord, Pendleton (Steve Waddington), comes calling for the rent. Even though Grace offers her and her husband’s wedding rings as payment for the next six months, Pendleton demands sexual favors. She defends herself from his attempted rape, but the rebuffed Pendleton goes and spreads a rumor that Grace practices the dark arts. Others join in the false accusation. Before long, Grace is declared a witch and arrested, jailed, whipped, and scheduled for interrogation by Judge Moorcroft (Sean Pertwee), a self-flagellating extremist specializing in procuring confessions from women. His assistant, Ursula (Suzanne Magowan), was one such woman who refused to confess until she was burned alive—but then a rainshower put out the fire, an apparent sign that God absolved her. 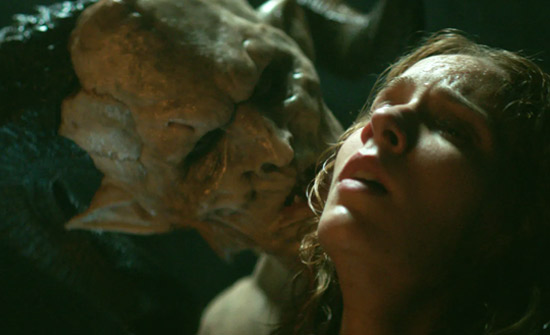 If the story thus far sounds promising, it’s because I haven’t mentioned how the movie’s forward momentum is constantly interrupted by Grace’s dreams, all of which end with some plague-ridden corpse opening its eyes, prompting a jump-scare accented by Christopher Drake’s piercing score. After Joseph’s death, Grace spends several nights alone, followed by another five in captivity under Moorcroft. Without fail, each night, we must endure her nightmares and the inevitable jarring shock before she wakes—a pattern that becomes predictable and, eventually, laughable. There’s also Kirk’s performance to consider. Delivering each line with melodramatic expressions, every breathy vow be spoketh with the over-accentuation of community theater or a daytime soap opera. Meanwhile, her hair and makeup never look out of place, not even after her exposure to a pear of anguish (in a particularly nasty scene). The rest of the cast doesn’t fare much better, each of them saddled by an overwrought screenplay that either takes its drama too seriously or its horror not seriously enough.

There’s also a confusing message and unresolved tension at the center of The Reckoning. The postscript reminds us that an estimated 500,000 women died at the hands of men who accused them of witchcraft. The fact is so disturbing because the fanatical patriarchy took out their irrational fear on women, subjecting the accused to unthinkable horrors without evidence in the name of an absurd superstition. With that in mind, it’s curious that Marshall injects scenes in which Grace, kept in a filthy medieval cell, sees a horned demon that whispers and temps her at night. She is, in a manner of speaking, talking to the devil, as her accusers suspect. Granted, she never formally signs an agreement with the demon for, say, her freedom or the life of her child. But he appears real enough.

Here’s a movie where the witch trials are not merely evidence of a frightened patriarchal system resorting to violence to maintain control. It’s a system that, apparently, fights the very real threat of witches and demons. But doesn’t this detail undermine the reality that hundreds of thousands of women were falsely accused and tortured? Is the movie saying that only some women were falsely accused, while others may have dealt with the actual devil? And those who did make a deal with the devil, did they deserve it? Quite frankly, I don’t know what The Reckoning is trying to say about the existence of a real demonic presence and whether that justifies the witch hunters of the period. Any lesson beyond Grace’s escape and empowerment feels muddled and underwritten, as though the filmmakers wanted a devil in the movie simply to attract fans of the horror genre. Ultimately, the movie would have been stronger without the rather creepy looking character.

Even so, we’re at a point as a culture where it’s almost preferable to make a deal with the devil than submit to an interrogator like Moorcroft. Had The Reckoning leaned into the horror genre a bit more, Grace might have signed away her soul to Satan and won her escape from captivity, allowing her to exact revenge. Fortunately, Grace uses her wits to escape and carry out the titular reckoning on her own terms, slicing and dicing her way through guards, as though she hadn’t just undergone days of torture and starvation. Unsatisfying as a historical portrait and underdeveloped as a horror movie, The Reckoning is sloppily written and directed with a heavy hand, providing neither a sobering drama about the crimes committed against women nor an escapist lark. It’s all the more disappointing because the basic logline sounds promising, and the poster sells a better movie than the one presented.