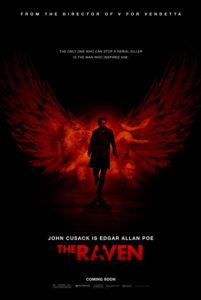 There’s a clever idea rife with potential somewhere inside The Raven, a gothic tale infusing biographical details about Edgar Allen Poe’s life into a gristly murder scenario. The film attempts to explain the poet and author’s last days. In early October, 1849, Poe was found roaming the streets of Baltimore; delirious and not in his own clothes, he feverishly rambled about someone named “Reynolds.” His reputation as a reckless alcoholic, opium smoker, absinthe drinker, and syphilis carrier meant that his death, though mysterious, came as a surprise to few. Nevertheless, the question remains, what happened to Poe before they found him, and who was this “Reynolds” character he spoke of? Adopting a dull thriller format, the film finds answers through bloody gore and serial-killer movie formulas.

Playing him surprisingly broad, John Cusack stars as Poe, and he fulfills a familiar tortured artist characterization that we’ve seen this actor do before (and better) in Bullets Over Broadway and Being John Malkovich. In the first scenes, Poe bursts into a tavern and declares himself a genius, then visits the editor (Kevin McNally) of a local tabloid and declares himself a genius, and then has a rendezvous with his secret lover Emily Hamilton (Alice Eve), who declares him a genius. Less the erratic, tormented soul we’ve come to imagine, Cusack’s Poe is in love and all too hopeful. He and Emily plan to announce their engagement to her domineering father (Brendan Gleeson), who disapproves and would rather have Poe shot than see his daughter be happy. Meanwhile, Poe suffers from writer’s block, because his recent happiness has drained away his signature mourning and macabre subject matter.

All at once, a series of murders in Baltimore suggests a fanatic has taken to slaying his victims in the manner of Poe’s stories. Investigator Emmett Fields (Luke Evans) determines the first killing of two women was based on The Murders in the Rue Morgue—except without the orangutan—and seeks out Poe as a suspect. But after another killing, based on The Pit and the Pendulum and soaked in CGI blood, Fields appoints Poe to join the investigation. In taunting notes left for the police, the killer announces his plan to kill again and dares Poe to catch him, like one of the detectives from his stories. When the killer kidnaps Emily and promises her death unless Poe plays along, their pursuit becomes personal, if not the routine of a dozen cat-and-mouse movies. With each new murder, Poe must write about it in the local paper to receive another clue to Emily’s location.

Historical accuracy holds no priority for the filmmakers, who utilize dialogue laden with modern vernacular and terminology not yet invented when this story takes place. For example, “Serial Killer!” splashes across a newspaper headline, but the term didn’t come to be until the mid-1970s. This reminds me of a similarly themed film set in Victorian London, From Hell, where Johnny Depp’s investigator looks for Jack the Ripper with a flashlight. Was he also a time traveler? Here, writers Ben Livingston and Hannah Shakespeare make a number of Wikipedia-brand mistakes like this, dropping biographical crumbs to link sloppy plot points together.

While the chase ensues, we watch our heroes tracking a shadowy figure whose identity remains secret until the final scenes (and no, it’s not an orangutan or any other form of primate). In between, we see Emily buried in a coffin under a thin layer of dirt, and her suffering adds to the growing suspense. But unlike Seven, where the killer’s identity brings another dimension to the story, the final reveal simply provides an answer to our question, but no insights. As random and inconsequential as an episode of Scooby Doo, the eventual unmasking disappoints, as given Poe’s fate, someone with a closer relationship to the protagonist would have heightened the tension and drama. Had the audience been aware of the killer all along in a Sherlock-Moriarty adversarial sense, certainly the proceedings wouldn’t have felt as pointless as they manage to feel.

Indeed, The Raven wants more to be a gruesome tale of murder and not a drama, but also a darker version of Sherlock Holmes, complete with a wide commercial appeal. And so, director James McTeigue, helmer of V for Vendetta and Ninja Assassin, delivers a by-the-numbers serial killer yarn and little else. The production looks good. Locations in Hungary and Serbia effectively impersonate architecture and cobblestone streets of nineteenth-century Baltimore, and Australian cinematographer Danny Ruhlmann shoots everything from the detailed costuming to the foggy, atmospheric exteriors with surprising clarity. But the production’s demographics appeal more to Saw-going crowds than to those familiar enough with Poe’s biography to recognize how literate the script attempts to be. It’s all very watchable in a low-expectations way, though anyone hoping for a tale worthy of Poe himself should look elsewhere.