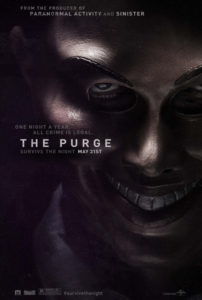 In The Purge, an intriguing “What If?” scenario devolves into a standard home-invasion thriller, and the question lingering afterward is whether the film’s evident social commentary outweighs the nasty violence it purveys. Intermingle an episode of Rod Serling’s The Twilight Zone with Sam Peckinpah’s Straw Dogs, and you have some idea of what writer-director Jame DeMonaco sought. Here’s the setup: One night a year, the United States government allows a 12-hour window for no-consequence crime. All emergency services retire for the evening, and citizens can take to the streets for half a day of murder, rape, robbery, or whatever urges ail them. One newscaster calls it “a countrywide catharsis.” The upshot: nationwide crime, unemployment, and homelessness rates have dramatically declined, as this flush of immorality has somehow spread goodwill and reduced the societal urge for random acts of violence throughout the rest of the year. The film centers on one family fighting to survive the night.

Solving significant social problems through comparatively smaller graphic exhibitions of violence has long had its place in history and fiction, from Roman gladiatorial bouts to Suzanne Collins’ trilogy of young-adult novels (Ever heard of The Hunger Games?). The question remains whether a communal therapy can manipulate or effectively change society. The sad truth is humans bore easily, and once they’ve seen a person torn to shreds by lions or riddled with arrows a few dozen times, they’ll probably lose interest and create some of their own crimes. Violent distractions such as this provide only a temporary fix until humanity goes back to finding other ways of destroying itself. Of course, this hasn’t happened yet to the society of The Purge. Set in 2022, people still believe in the healing powers of this event, referred to as “The Annual Purge.” TV personalities and many citizens thank the government for allowing it, firmly believing in its grander curative properties. However, detractors question whether it was designed to wipe out the poor and sick who cannot afford to protect themselves, resulting in the lower classes’ slow extermination.

Whatever the motivation, the Purge commences on March 22 of each year, and with this, James Sandin (Ethan Hawke) has made a lucrative career selling home security systems. He lives along with his wife Mary (Lena Headey) and teenage children Zoey (Adelaide Kane) and Charlie (Max Burkholder) in a lavish home envied by the neighborhood. The night of the Purge, Charlie has a bout of morality and disarms their security system to help a homeless man (Edwin Hodge) on the run from a band of preppie psychos out for a night of purging. Once the security system is armed again, the man disappears somewhere in the Sandin house. Outside, the psychos approach, masked and carrying heavy weaponry. Their leader, a Heath-Ledger-as-The-Joker wannabe (Rhys Wakefield), has his heart set on torturing the homeless man and gives James an ultimatum: Send the homeless man out for summary execution, or his gang of killers will break in and murder everyone. After searching his own house for the homeless man and some moral teeter-tottering, James finally resolves to fight back, and the result is gruesome, the body count high.

For most of the film, DeMonaco’s cinematographer Jacques Jouffret shoots in a house whose power has been cut, but we’re never struggling to see what’s going on. No matter how polished the visual presentation (aside from standard shakiness during more intense scenes of violence), DeMonaco’s script contains glaring plot holes that make suspension of disbelief a challenge. Consider the notion that, in the next nine years, no less, American society will decide to “purify” itself through violence. Films set in the not-too-distant future often make the mistake of dating themselves unrealistically. Setting The Purge in the far-off future or simply not assigning the material a year at all would have enhanced the story by eliminating any question of plausibility within its timeframe. This says nothing of the unbelievable characters, especially those who willingly participate in The Purge. All at once, they act as though they’ve been brainwashed by some all-reaching cult influence; later in the film, after a predictable twist, a group of killers forms a circle and plans to carry out a ritual murder with knives. Never once do we believe that America as a whole could summarily turn to such extremes, as DeMonaco has failed to develop his film’s situation in any way resembling plausibility.

But perhaps I’m mistaken about the material’s plausibility. More disturbing than the film itself was the audience’s reaction in my screening. I attended a 10 p.m. show the night before the release date of June 7, 2013. White, middle-class high schoolers, and the usual crowd of dudes and babes for a late show, filled the auditorium. Their response to The Purge was genuinely unsettling. First, the audience laughed at the film’s scenes over the opening credits, which show news footage of grisly murders caught on security cameras. Then, when the preppie invaders entered the home and started spilling blood, merriment and laughter rang out all around. (I won’t bother detailing how one patron shouted the N-word at the screen, which sent most of the audience into cackles; it was a moment that both shocked and saddened me, and I’d like to forget it.) No doubt the response was more boisterous than the auditorium next door, which was showing the new Vince Vaughn and Owen Wilson comedy The Internship. Whereas DeMonaco tries to say something is deeply wrong with a society that needs to purge its violent impulses, it’s unsettling to sit in a crowd that completely misses the point. It’s one of the first times I’ve sat in a theater and not only felt disgust for the moviegoers around me but actually felt unsafe by the level of enthusiasm displayed toward onscreen violence. It was not unreasonable to suspect a James Holmes-type to arise from the crowd and purge himself. When the credits began to roll, my wife and I left with haste.

Of course, some cinematic violence intends catharsis. Take the therapeutic revenge exacted in Inglourious Basterds or Django Unchained. Both films dish out their violence with complimentary doses of historical irony and revulsion. But this is not one of those rare cases, and DeMonaco is certainly no Tarantino. Granted, The Purge is intended to make us squirm with suspense and feel a certain sense of relief when Hawke’s character protects his family, but the overall theme wants to say something more. DeMonaco never finds a balance between his intended social message and the brainless chills of the home-invasion scenario; neither did Peckinpah (or Rod Lurie in his Straw Dogs remake, for that matter). Moreover, that a packed house of youths cheered as they did with no regard for the film’s purpose forces one to pause and reflect on our future as a culture. My concern is this: When the youths in my screening grow up, will their casual mindset toward violence still be as unfazed? And if these are our future leaders, and this nonchalant attitude toward screen violence represents the status quo, then perhaps it’s not impossible to imagine something like The Purge happening someday—a frightening thought. More frightening still is how this reaction was motivated by nothing more than a mediocre film whose method and meaning were confused by a shoddy script and underdeveloped concept. Then again, it wasn’t so jumbled given the kind of reactions it received.