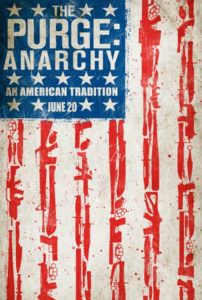 In The Purge: Anarchy, writer-director James DeMonaco returns to his disturbing world of “countrywide catharsis” through savage, unchecked violence. After the 2013 original earned over $85 million above its slim $3 million budget, Blumhouse Productions couldn’t resist ordering a follow-up. The superior result proves less mean-spirited than The Purge and even emphasizes the moral conflict drawn from the central concept. Nevertheless, the movie’s attempts at social commentary about the decline of U.S. culture and increasingly extreme politics are overshadowed by how DeMonaco revels in morbid ultra-violence. But then, even with fewer notable stars (the original featured Ethan Hawke and Lena Heady), the sequel boasts stronger characters and an undeniable narrative thrust.

For the uninitiated, the film takes place fewer than ten years in the future, when an Annual Purge, launched by a dominant political party known as the “New Founding Fathers,” allots 12 hours for citizens to engage in free reign crime without legal repercussions. Each year on March 22 at 7 pm, the Emergency Broadcast System announces the commencement of the Purge, a time during which many citizens lock themselves inside while others go out to commit unspeakable crimes. Presumably, the intended purpose is to allow everyday citizens the opportunity to blow off steam (an understatement, of course). However, as Anarchy suggests, it’s actually a political weapon to reduce the surplus population, eliminate the lower classes who cannot afford to protect themselves, and further empower the upper classes. As a result, the film means the audience to feel disgusted about those who participate in the act. But how are we supposed to feel about ourselves, having watched these acts taking place?

Though Anarchy contains subplots directly about the political machinations behind the Annual Purge, the story is most effective during its intense survival mode. The sequel finds a handful of stragglers and victims on the streets, running for their lives, only to find an unlikely hero in Leo (Frank Grillo), a cop determined to take revenge on the man who killed his son in a car accident. Adopting a Punisher-esque outfit, complete with heavy weaponry and a reinforced car, Leo heads out into the fray, his brow heavy with the ethical implications of his mission. Unfortunately, he stumbles upon a squabbling couple (Zach Gilford and Kiele Sanchez) and a frightened mother-daughter pair (Carmen Ejogo and Zoe Soul) who need rescuing from various groups of psycho killers in masks, all celebrating the Purge with maniacal glee.

After my disturbing experience with The Purge on opening night (read the original review for details), I avoided seeing Anarchy in theaters. The audience in my screening of the original seemed to celebrate the movie’s violence and completely overlooked its disturbing intent. Instead, they cheered with unbridled enthusiasm over the violence, eerily mirroring the bloodthirsty purging killers onscreen. The crowd’s reaction suggested not only that DeMonaco’s social commentary failed to connect with his audience but that his audience was much worse than he thought. Ultimately, The Purge was less satirical than he envisioned. At any moment, I suspected the crowd would explode in their own violent purge.

With Anarchy, dim-witted viewers have less chance of confusing or overlooking DeMonaco’s message, but his commentary isn’t as intelligent or well-executed as he believes it to be. DeMonaco’s attack against the wealthy 1% isn’t subtle. He depicts the upper-classes purchasing the lives of less-fortunate people—who volunteer for a hefty sum to be deposited into their family’s bank accounts—just so the super-rich can kill in the safety of their own home. On the periphery, we see subversive video of an anti-Purge movement led by pseudo-intellectual-cum-revolutionary Carmelo (Michael K. Williams), whose followers fight violence with violence. When a band of well-to-dos auctioning off prisoners for sport killing capture Leo and his gang of helpless citizens, Carmelo comes to the rescue, which is less a revolution than a small resistance.

High-concept escapism such as this can’t help but provoke countless questions but provide few answers. For much of the film, I found myself poking holes in the logic behind the Purge itself: The majority of people in this world seem angry about the Purge, so why aren’t they rebelling against their New Founding Fathers? Why is it legal for citizens to premeditate murder outside of the Purge’s 12-hour window? Isn’t premeditation still a crime? What if a crime is committed inside of an hour before the Purge’s commencement—will emergency services respond, and if so, do they have only until the Purge starts to secure the scene and investigate? Who’s checking to make sure these murders aren’t committed just before or after the Purge window? If someone is attacked during the Purge but dies afterward, can the attacker be charged with murder? But I digress.

With a concept that may have sounded bonkers and implausible until Donald Drumpf became a potential frontrunner for the 2016 presidential election two years after its release, The Purge: Anarchy offers a few frightening ideas and modern-day reflectors—none of which the movie explores to their full potential. Grillo makes an affable hero, and his scenes guiding his frightening gaggle from one tense situation to the next are undeniably engaging. DeMonaco demonstrates improved confidence behind the camera, and his cinematographer Jacques Jouffret captures night scenes with admirable digital clarity. But the movie’s clumsy attempt at a message doesn’t add much substance to a project that exists purely to make money (it cost about $10 million and earned well over $100 million) and entertain audiences with chaotic bloodshed.