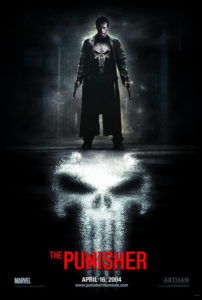 In an attempt to imbue realism into the Marvel Comic franchise, the filmmakers behind 2004’s The Punisher dismissed their source, and narrowed their movie’s potential by incorporating all the clichés of a bad action yarn. And who needs another one of those? Certainly not those unfortunate few who saw the Dolph Lundgren version of The Punisher from 1989. Unfamiliar with the comic book’s basic storyline? That’s fine, the movie makes it up as it goes along anyway. Ex-military man and undercover FBI agent Frank Castle (Thomas Jane, from The Mist) retires after one last mission—a weapons exchange-gone-wrong, during which the son of crime boss Howard Saint (John Travolta) is killed. Saint executes retribution on a massive scale under instruction from his moody wife (Laura Harring), slaughtering Castle’s entire family including his wife and son. Barely surviving the attack, Castle vows to “punish” those seemingly above the law with extreme prejudice, donning a cheapie costume—the black-with-white-skull shirt his son gave him—and using an arsenal of weaponry to out-gun the enemy.

Nevermind the moral double-standard of exacting revenge on someone who once exacted revenge you. After all, most movie vigilantism has a certain cartoonish air, because in order to make the take-law-into-your-own-hands plot sympathetic, the hero is always an innocent victim, and the villain is always a monster. Without that polar opposite dynamic, the revenge becomes ethically questionable. Jane’s capable acting lends the character brooding atmosphere, versus Castle becoming a one-note madman on a rampaging blood-hunt. His performance is the movie’s best feature. Travolta, however, doesn’t make an effective target. Saint isn’t pure evil, just your average movie criminal with too much money and too much power. His right-hand-man Quentin Glass (Will Patton), who’s afraid to confess he’s gay, also happens to be the most interesting villain offered—especially when Castle arranges it to appear as though Glass is having an affair with Saint’s wife (a conflict plays out like a demented episode of Three’s Company).

But The Punisher resists dwelling on Castle’s loss and inner woe, lighting the audience’s load by involving us more with his wacky neighbors. There’s the pudgy and therefore jolly Bumpo (John Pinette), whose name gets stupider the more you think about it. The many-pierced reject Dave (Ben Foster, from 3:10 to Yuma) should have a name like Damien or Slater. And Joan (Rebecca Romijn) is just as plain and boring as her name sounds. They’re all interested in Castle, their new neighbor in their ramshackle building, and they each make it their duty to annoy him and postpone the story from moving forward.

Boasting an R-rating, the film’s almost unlimited capability to showcase violence allows Castle to mow down bad guys by way of guns, knives, bombs, and even arrows, with plenty of blood and F-words to boot. Set free by the adult rating, first-time director Jonathan Hensleigh (who wrote Die Hard with a Vengeance) fails to explore the character’s most fascinating conflict—that he’s Marvel’s equivalent to Batman, only not bound by any set of scruples that prevent him from killing to appease his hunger for payback. Therefore there’s something inherently criminal about him. Except, The Punisher’s anti-hero status is ignored altogether in this movie; he’s reduced to being a homemade Good Guy without special powers, just a munitions store and a souped-up car. Heaven forbid the movie leave the audience’s understanding of the “hero” in question, because that would make the story interesting…

The problem is, how do you make a movie about this character’s particular type of vigilantism without asking questions about where he stands morally? But, I suppose, it’s not my place as a critic to instruct filmmakers how to make their movie. Nor should I lament what The Punisher could have been, especially when I’m writing this review during Marvel’s post-Iron Man renaissance, when gravitas-laden superheroes are rendered by expert, experienced directors. Instead, Hensleigh tells this origin story by taking Marvel’s iconography for the hero and softening it, probably because the comics’ Punisher was a ruthless murderer that other superheroes frowned upon. Hensleigh abandons that anti-hero appeal, giving an actioner that entertains, in that sleepy Sunday afternoon way.