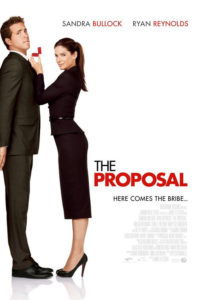 Containing every crowd-pleasing romantic comedy cliché in the book, The Proposal relies almost exclusively on formula storytelling. Bits and pieces from this or that movie make up the whole. You’ve seen it before. You know how it’ll end. But there’s something satisfying in a predictable rom-com, isn’t there? Perhaps it’s the assurance of knowing that in the end everything’s gonna be okay. Formula works, which is why it’s been established as formula. But there’s a point where enough is enough, where we’ve watched these same old scenarios dozens of times, and to see them in yet another movie is just embarrassing, if not insulting.

Sandra Bullock and Ryan Reynolds star as the typical improbable-yet-inevitable couple; they start off hating one another, but they’re otherwise made for each other. She’s his venomous boss, just a step behind Meryl Streep’s cruel executive from The Devil Wears Prada. He’s her doting, sarcastic assistant, desperate to please but hoping to become a top literary agent like her someday. When her busy New York City lifestyle causes her to forget to reapply for an American visa, she’s told that she’ll be deported back to Canada. She blackmails him into marrying her, promising him a big fat promotion if he cooperates.

Their ersatz couple performance is under scrutiny by a suspicious immigration officer (Denis O’Hare), who rightly suspects their relationship is phony. Meanwhile, to make matters worse, they leave together for Alaska to meet his entire family for the 90th birthday celebration of his Grandma (the rambunctious Betty White). His parents (Mary Steenburgen and Craig T. Nelson), well-to-do pillars of their Alaskan community, don’t approve of their son’s city life, but want him to be happy. The unlikely couple falls in love while faking their engagement, but neither of them realizes it until it’s too late. But, of course, they get together in the end.

Director Anne Fletcher (27 Dresses) and writer Pete Chiarelli play mix-n-match with various tools of their chosen genre. Here we have the “meet cute” device, where two characters who hate each other are for whatever reason bound together, and they fall in love because of it. There’re antics including a very cute puppy and an eagle, a male stripper, and plenty of misunderstandings involving both, because aren’t there always? The climax takes place at a wedding, as it usually does, which is summarily and dramatically ruined. And the final confession of love between the two comes while standing in front of a group of people, all of whom fawn over the couple’s displays of affection, letting the audience know just how we should be reacting.

Bullock and Reynolds are both attractive stars for a winter-summer romance that reverses the Hollywood standard of an older man with a near-criminally younger woman. Bullock transitions nicely between being a cold-hearted reptilian executive to showing her sensitive side after her character warms up a bit. Reynolds plays that cocky, quick-witted role he played in every movie since, well, ever. Together their chemistry is believable enough to overlook some of the films downfalls… Some of them.

The entertainment value of most rom-coms today is deceiving, since build-ups are often more intriguing than any resolutions could be. Interesting characters will always prove more fascinating than the humdrum way in which the genre forces them to behave. We’ve seen sappily poetic songs sung, last-minute confessions of love, and oh-so-many weddings ruined in various ways. The unfortunate result of this homogeny of rom-com endings is the momentary effect it leaves on the viewer. After laughing throughout the entire movie, feeling those programmed notes play all through the end is just a bummer. So while The Proposal is enjoyable, funny, and at times an endearing movie, it leaves you frustrated with its standardization the more you think about it.