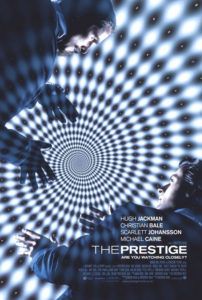 True magic hinges on misdirection from the inconceivable control of the magician, and equally on the audience’s wonderment and acceptance of the act. The spectators accept that the performer’s sleight-of-hand and mastery of the unknown are somehow real, while also knowing such feats are accomplished by basic trickery, and therefore, observers are absorbed by the show. The magician’s power is kept within his secrets. Once the audience knows the secret, the magic disappears. The show itself, the flair around the performance, is another kind of magic and is the prominent type of thrill dealt with in The Prestige. How does a single trick become something wholly different and enjoyable depending on its delivery? It’s one thing to duplicate a trick, but it’s another to present the trick in such a way that the original version is forgettable.

Set in Victorian London, The Prestige begins with two magicians, Angier and Borden, played by Hugh Jackman and Christian Bale respectively, both working under Cutter (Michael Caine). Cutter teaches them lessons in magic, but also the importance of showmanship. Angier’s talent resides in the performance, in presentation, but at first, he doesn’t appreciate the concept of sacrifice for his art. Borden does, however, and believes that a great show is less about showmanship and more about the veracity of the trick; great magic takes dedication, and a magician behind great magic cannot perform without first surrendering himself to the act.

During a performance wherein Angier’s wife is tied and dropped into a water-filled escape tank, Borden fastens a different, potentially unsafe knot in the rope from which she is meant to escape. The knot proves inescapable, and she dies. Borden’s desire to take risks and run the show his own way causes the death of Angier’s wife, and Angier cannot forgive him. A professional error becomes a personal struggle; Angier grows obsessed with out-doing Borden on stage to gratify his desperate desire for revenge. Angier and Borden each develop independent acts complete with new material. Borden represents the concept of magic—the materiality and physical act of trickery; Angier, the showmanship of the performer. Though Angier is the more successful of the two financially, as an artist, Borden wins. By attending the other performer’s shows, each man sabotages the other’s routine by posing as an audience volunteer; each develops a hatred for the other man and an obsessive professional rivalry.

In a new act, Borden performs “The Teleported Man.” On either side of the stage, a boxed-in enclosure has a door. Borden, on stage right, bounces a rubber ball toward the door on the opposite side.  He steps back into the enclosure, shuts the door, and suddenly opens the door stage left, just in time to catch the ball. Cutter, who works alongside Angier, attempts to convince him that Borden is using a double. But that’s too simple for Borden, Angier believes, and he consumes himself in discovering Borden’s secret. Angier unintentionally transforms himself into the audience, while Borden maintains his position as the magician. Angier’s obsession always keeps him watching Borden, trying to uncover how Borden does it. Borden, meanwhile, sees through Angier’s attempts to imitate “The Teleported Man” and knows exactly how his rival duplicates the method.  His own act, in a way, is performed exclusively for Angier, showing him up at every turn.

Looking where sleight of hand cannot see, Angier seeks the help of scientist Nikola Tesla (David Bowie) to best Borden. Tesla’s science threatens the logic of Thomas Edison’s declarations on electricity; it’s submerged in mystery and the horrors of science. Like Dr. Frankenstein, Angier is an engrossed madman who wields an uncontrollable force of nature to satisfy an emotional craving. He uses Tesla’s science to better Borden in a way Borden cannot conceive. Upon Tesla’s introduction into the picture, The Prestige changes from a focus on the technicalities of stage magic to an embrace of showmanship, even the extraordinary or fantastical. Tesla does not devise mechanisms that appear magical; he discovers magic through his machines, which harness the awful power of nature. Nearly every piece of stage magic in the film is explained to us, but there’s no explaining Tesla. The film becomes the stage for the audience to gaze upon. As we learn more and more about the possibilities and mysteries of what Tesla creates, Angier’s growing obsession for his revenge and professional victory becomes all the more twisted.

Borden suggests that true magicians sacrifice everything, their entire lives, for their trade.   Angier sacrifices more (although I could understand if someone argued that Angier sacrifices less).  As director and co-writer of The Prestige, Christopher Nolan is a master at playing with audience expectations. With Memento (2000), his narrative unfolds both backward and forwards, meeting in the middle, maintaining ambiguity throughout, which allows for subjective reads. Insomnia (2002) put Robin Williams in the role of a murderer and surprised everyone to his versatility (it was the first in a set of darker roles for the actor). In Batman Begins (2004), Nolan changed the outlook on the cinematic presentation of the Caped Crusader; the hero became the dark, intelligent, complex character he should be (I expect Nolan will further compound the character in the upcoming sequel, The Dark Knight, due in 2008).

The Prestige became a different movie when I watched it the second time; it works like Borden on the first viewing and like Angier on the second—which is perhaps why I was more interested in Borden’s character when I first saw it but became more horrified by Angier when I recently revisited the film. When first seeing the picture, the audience sees the technical aspects of the film; we’re concerned with the surprise, with the numerous disclosures in the final few scenes. But once we already know the ending, we watch the film for the presentation: the splendor of the film’s visuals, the horror of the turns, and the wonderful story of obsession. Nolan crafts a beautiful film with a visual magic that outdoes The Illusionist, another Victorian-era movie about a magician released in 2006. The Prestige satisfies both plot and glamour, both Borden and Angier, giving audiences the twists and turns of cinematic smoke and mirrors, and an illustrious production by which to present it.