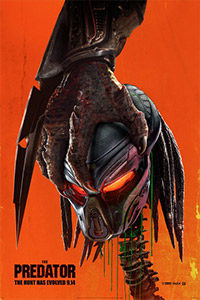 There’s plenty to enjoy about The Predator, writer-director Shane Black’s entry in the long-running franchise. There’s a good deal about it that’s puerile and frustratingly dumb, too. In the right mood, however, one could not be faulted for delighting in what amounts to a fast-paced, often hilarious, ultra-bloody action movie. Black, who had a small role in and helped script doctor the 1987 original—an essential ‘80s action classic—reteams with Fred Dekker, his co-writer on The Monster Squad (also 1987), for the fourth entry in the series. Black and Dekker imbue the material with a frenetic energy, self-awareness, and humor worthy of teenage boys, all in an attempt to refresh the material for an audience with shrinking, small attention spans. With a significant budget, and Black, the director of Iron Man 3 (2013) and The Nice Guys (2016), behind the camera, The Predator has great possibility. It’s unfortunate that the movie left me so divided.

After director John McTiernan’s splendid Arnold Schwarzenegger-starring original, Twentieth Century Fox didn’t know what to do with the Predator franchise. The 1990 sequel, Predator 2, replaced Schwarzenegger with Danny Glover and shifted the jungle setting to the urban war zone of 1997 Los Angeles, reflecting the era’s gangland anxiety. Then came two disastrous mashups, Alien vs. Predator (2004) and Alien vs. Predator: Requiem (2007), where Fox hoped to solve the problem by taking two franchises, both of which they were clueless about, and blending them. Next up, Predators (2010), a worthy, if derivative homage to the original with one helluva hook. But not unlike the Alien franchise, Predator movies have been saddled with the studio’s annoying need to tamper with the purity of the creature at the center. Most of the sequels entail DNA manipulation and gene splicing to create a bigger, more vicious monster, but these choices usually result in absurd beasts that defy the singular appeal of their original incarnation. It’s these aspects that are the silliest about The Predator.

The action opens in Mexico, where Quinn McKenna (Boyd Holbrook), a US-sniper-turned-mercenary on a hostage rescue mission, watches his entire crew get slaughtered by a cloaked alien that crashed in a spaceship nearby. Escaping with a few of the alien’s gadgets, McKenna mails them to a safe location before being detained by a top-secret government outfit, called “Stargazer,” led by the smarmy Traeger (Sterling K. Brown). Aware of the presence of aliens, so-named “Predators,” since the events of the first movie, Traeger’s team captures the creature that landed in Mexico. The scientists also enlist the help of Dr. Casey Bracket (Olivia Munn), a biologist who immediately notices the human strains of DNA in the alien’s blood samples. But before anyone can hypothesize why that would be, the Predator escapes capture and runs amuck, slicing, dicing, and exploding everyone in its path. 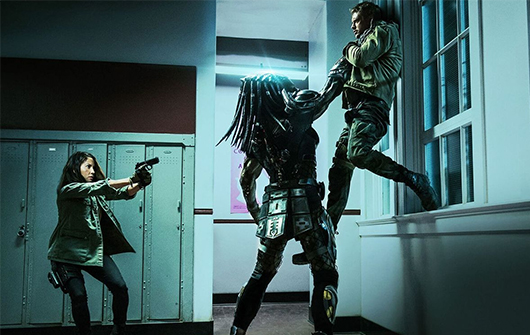 Meanwhile, McKenna teams with a group of fellow military prisoners, all former soldiers now riddled with PTSD, loose morals, and punchy senses of humor. Dubbed the “Loonies,” this team of unhinged badasses sets out to stop the alien. Nebraska Williams (Trevante Rhodes) is suicidal and smokes like a chimney; the Tourette-suffering Baxley (Thomas Jane) and his wisecracking friend Coyle (Keegan-Michael Key) have an amusing bromance, supplying the movie with most of its comic relief; Lynch (Alfie Allen) is the resident explosives expert; and Nettles (Augusto Aguilera) finds himself with a crush on Dr. Bracket. At the same time, The Predator introduces us to McKenna’s estranged wife (Yvonne Strahovski) and their autistic child, Rory (Jacob Tremblay). The boy has opened the package from his father, sent from Mexico, containing a Predator helmet and blaster, which complicates matters by alerting a bigger, badder alien—a hunter of hunters—of their whereabouts.

The Predator’s momentum is what works best, along with the blue banter amid the ensemble cast. From the title onward, Black maintains a relentless energy, shifting from one deadly set-piece to another. Although his editors (Harry B. Miller III, Billy Weber) deliver the occasional choppy cut or unclear shot-to-shot logic, especially in the brutal final act, most of the action is clearly delivered by cinematographer Larry Fong. (It’s difficult to know what exactly is missing in the aftermath of a very public scandal, in which Fox cut the movie’s performance by Steven Wilder Striegel, a convicted sex offender.) Anyway, the mayhem occurs at night, chiefly, when the alien’s bioluminescent green blood glows best. Elsewhere, the writers seem to delight in providing a number of grotesque shocks and gory displays. Take a moment when the Predator butchers a SWAT truck full of soldiers, during which the driver asks, “Everything alright back there?” Thinking fast, the alien grabs a dismembered arm, shapes a thumbs-up on the hand, and then pokes it through the driver’s window. There are a lot of laughs to be had here, and admittedly, I alternated between chuckles and gasps throughout my screening.

Although the suspense and humor throughout The Predator had my attention, I very often found myself rolling my eyes at what Black does with the alien mythology. Similar to last year’s Alien: Covenant, the visceral nature of the movie is incredibly engaging, while the specifics of what’s happening are downright stupid. Beyond the human-alien hybridization, Black introduces Predator dogs, who curiously have similar faces and dreadlocks to their more humanoid counterparts (they’re the Predator equivalent of the human-faced dog from the 1978 Invasion of the Body Snatchers). The super-Predator, an 11-foot-tall behemoth that bashes its smaller relative to a pulp, is a CGI monstrosity that never has the tangible feel of the original. There’s as much distance between Predator and The Predator as there is between Alien (1979) and Alien: Resurrection (1997). Worse, just when you think Black has stopped introducing new wrinkles in the mythology, the final scene introduces yet another trivial concept.

For all the uninspired sequels, spinoffs, and semi-reboots in the Predator franchise, the material has nonetheless maintained a firm place in cult popularity, largely based on the enthusiasm for the original. And while I doubt fans will consider Black’s sequel a new and vital piece of sci-fi canon, the 101-minute duration proves absolutely diverting. This is in spite of my own nerdy and quibbling objections to the script’s overreliance on DNA-centric plot developments within a vast galaxy-wide hunting conspiracy. In fact, the plot of The Predator is entirely disposable next to Black’s macho-humorous tone, the affable performances throughout the cast (especially Munn, Holbrook, Rhodes, Key, and Jane), and the sheer intensity of the action. It certainly enters guilty pleasure territory somewhere between the Predator dogs and the rodeo-riding spaceship finale. Indeed, I wanted to like The Predator more than I did, both out of fondness for the original and Black’s directorial efforts. But I was left feeling mild disappointment, regardless of how much I was entertained.