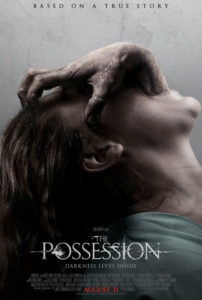 The Possession is another in a long line of movies borrowing its formula from The Exorcist, where the tension of a broken family at once disguises and becomes the subject of metaphoric assignment by a demonic presence. Released by Lionsgate and Sam Raimi’s production company Ghost House Pictures, it’s a PG-13 rated chiller that starts out spooky enough but gradually turns toward the cliché and silly, except not in the fun way Raimi himself explored in Drag Me to Hell. The movie was directed by Danish filmmaker Ole Bornedal, whose macabre, entertaining 1997 yarn Nightwatch featured Ewan McGregor as a security guard in an eerie university morgue. But here Bornedal does little more than reintroduce a familiar bag of tricks to a new audience, except in a package so haphazardly plotted that one can’t help but chuckle at its leaps in basic common sense.

Recently divorced couple Clyde (Jeffrey Dean Morgan) and Stephanie (Kyra Sedgewick) have split custody of their two daughters, the teenaged Hannah (Madison Davenport) and 11-year-old Em (Natasha Calis). At a yard sale, Clyde buys Em a sealed decorative wooden box that speaks to her in a voice no one but she can hear. She finds a way to open it, and inside there are tokens and strange personal items, like a tooth and dead moths and locks of hair. Before long, Em is behaving strangely and aggressively, while everyone blames her sudden narcissism and violent outbursts on the stress of the divorce. When her behavior can no longer be ignored, Clyde grows suspicious of the box, which he takes to an expert who explains the situation. Em is being invaded by a Jewish demon known as a dybbuk, a malcontent spirit who wants only to find a child host. Though before Clyde has time to explain what’s going on, he’s barred from seeing the children, as Stephanie believes he’s been abusing Em and making her this way. Inevitably, the scene comes where everyone realizes—whoops—Clyde was right after all. Enter reggae fusion singer Matisyahu as the resident Hasidic hipster and exorcist for a downright eye-rolling exorcism sequence.

The screenplay by Juliet Snowden and Stiles White was purportedly based on actual events, but with one web search, we find the source story involved a wine cabinet whose owner believed that it was haunted by a dybbuk. The original owner sold their “dybbuk box” on eBay, and the several subsequent owners have reported strange and scary things happening as a result, but then again this might all be an elaborate internet hoax, as these things often are. Certainly the filmmakers would never downplay any coincidences, as web hysteria rarely hurts marketing efforts. At any rate, many film critics have claimed The Possession marks the first Jewish exorcism put to screen. How soon they overlook David S. Goyer’s easily forgettable The Unborn from 2009, featuring Gary Oldman as the Jewish exorcist of a nasty dybbuk. Remembering such a dull movie isn’t a point of pride; call it a curse.

It goes with the territory that movies sometimes have plot holes, and as viewers we must occasionally disregard how little of what appears onscreen makes sense and how many questions we’re left with. Here’s an example: One morning at the breakfast table, Em stuffs her face full of pancakes, feeding the demon inside her, or whatever, and Clyde tries to convince her to slow down. When she doesn’t listen, he slams his hand on the table, and she stabs it with her fork. This stabbing is never addressed again in the movie. Clyde’s hand is never bandaged, nor does he ever mention the incident to Stephanie. Although, a scene or two later, he asks his ex, “Have you noticed anything strange about Em lately?” Um, like, has she tried stabbing you at all? Because she stabbed me! It’s as though it never happened. Or consider the ring Em takes from the box, which slowly turns her hand blue-gray; the camera keeps stopping on her hand, showing us its discoloration, and at the end someone picks up the ring, but what’s the significance? We never find out.

Oh, and why doesn’t anyone try to destroy the box? It’s almost shocking that we never see what happens when someone tries to burn or demolish it. Then again, chances are they wouldn’t survive so long as to try—several throwaway characters (i.e. victims) think about harming the box, and they’re kaput before even coming close. Rather than assembling a cohesive story, Bornedal’s skill is spent realizing familiar genre trickery through overused CGI effects: Swarms of demon moths flutter in and out of Em’s mouth, something like a hand moves under Em’s skin or in her throat, her eyes roll back in her head, and eventually the slimy animated dybbuk makes an appearance, looking like rejected concept art for Gollum. The Possession is at its best when it plays like a family drama about divorce, which is for about 20 minutes. The remainder of the 90-minute runtime is wasted away on variations of scenes we’ve seen before, and better, elsewhere. Best to seek those avenues instead.