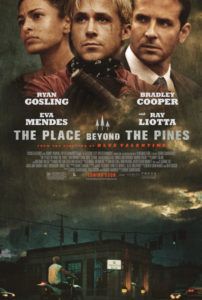 In The Place Beyond the Pines, sins of fathers are visited upon their sons for a moving crime drama of impressive ambition. Director Derek Cianfrance delivers his third feature film, after his most recent success with Blue Valentine (2010), and displays an astounding sense of control over his work’s aesthetic consistency and very specific use of tone. Structured in a triptych format, the overall narrative is divided into three individual yet interconnected stories, and thusly the configuration has left some critics and audiences feeling detached from the picture overall. But the screenplay by Cianfrance, Ben Coccio, and Darius Marder reveals a trio of stories filled with compelling turns and imposing scope for an audience willing to regard the bigger picture as opposed to the merit of one story versus the other. Despite employing several formulaic genre threads we’ve seen done several times before, Cianfrance’s film imbues familiar elements with a gravitas that distinguishes them.

The first story begins with carnival daredevil “Handsome” Luke Glanton (Ryan Gosling) returning to Schenectady, New York, where he’s greeted by his former fling Romina (Eva Mendes). He learns their brief affair resulted in a child, and though Romina doesn’t want anything from Luke, he wants to be a father. “My father was never around,” he says, “and look how I turned out.” Dropping the nomadic lifestyle to support Romina and their young boy, the tattooed loner has few skills beyond riding his motorcycle. Luke gets a job with local mechanic Robin (Ben Mendelsohn), a former bank robber who wants to start up again and help Luke commit a string of robberies. Enter Officer Avery Cross (Bradley Cooper), the protagonist of the second chapter. He’s a smart, good cop whose heroism earns him attention—some of it paving his way into politics; some of it unwanted, namely that of crooked cops in the department (among them an intimidating Ray Liotta) who want to use Cross’ hero status as cover for drug and gun running. In the final chapter, which takes place 15 years after the second, Cross’ teenage son AJ (Emory Cohen) befriends a boy named Jason (Dane DeHann, from Chronicle), and the two begin to understand how their fathers have shaped their lives in ways they’re yet too young to understand.

To describe the plot in any more detail would rob the viewer of experiencing the full challenge of the emotional passages from chapter to chapter. Separated by only a few seconds of black screen time, the three chapters proceed chronologically and avoid intercuts, forcing the audience to grow attached to one character and then watch him pass by as the next chapter begins. Unlike the recent Disconnect, this film could never be as effective if told in a mosaic format. The film progresses deliberately, making the audience an onlooker of these tragic lives, whereas a mosaic structure would have been easier on the audience and, therefore, less powerful. Like life, we grow attached to the characters in The Place Beyond the Pines and must watch as they die or simply recede from our most immediate view. The central argument among the many critics against the film is how this or that story isn’t as strong as the others; most agree the first chapter is the best, while there’s debate about the second or third weakening the strength of the picture overall. Admittedly, Gosling’s intense yet almost fragile performance (similar to the one he gave in Drive) sets the first chapter apart, but it doesn’t overshadow what follows to the degree of damaging the film as a whole.

Cianfrance instills an immaculate air of profundity from scene to scene. Mike Patton’s score sounds like what Kubrick envisioned for The Shining; and in line with that film, one cannot help but think of the long, slow shots down the winding road to The Overlook Hotel as Cianfrance’s cinematographer Sean Bobbitt (Shame) ominously follows Avery’s car to a terrifying meeting, or as it creates a visual connection between Luke and Jason riding their bikes down similar tree-lined roads. Patton’s music feels almost horrific in such scenes, yet at other times it’s delicate and meaningful. Meanwhile, Bobbitt’s lensing employs a range of techniques always in the muted but naturalistic color palette. During Avery’s exciting chase after Luke, there’s a wild camera style that’s busy but never unintelligible. Even better are Luke’s frenzied dirtbike getaways and his forest trailblazing, sequences which take shaky camerawork to new heights but never hide the action. These booms of style stand out in a film comprised of usually stable handheld shots, many of them following behind characters on their long march, such as the bravado opener leading Luke to his carnival’s motorcycle death cage.

Cianfrance borrows from crime stories ranging from The Godfather to Serpico to Heat, but his naturalistic technique behind the camera and his sense of gravity in the proceedings make The Place Beyond the Pines a film that will not soon be forgotten amid the ever-flowing surplus of crime dramas released by Hollywood. This is an indie gem first screened at the Toronto International Film Festival in 2012, not some polished, mindless studio project. And so, Cianfrance’s approach is artful and uniquely structured, a quality that will divide audiences as a demanding film should. The ensemble cast—especially Gosling, Cooper, and Dehane—is central to this chaptered saga, with a strong supporting cast including Liotta, Mendelsohn, Rose Byrne, Bruce Greenwood, and Harris Yulin. They’re all giving authentic performances in a somber, realistic treatment that could have easily diverted into soapy melodrama given its familiar plotting. But Cianfrance never allows his viewers to escape the heartbreak of his film, consuming us with a resounding feeling of sorrow over these characters and the way their lives set paths for one another.