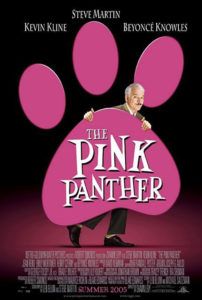 Viewing The Pink Panther requires an odd trait reserved by many moviegoers but not by many film critics. It’s the talent of disregard for everything except for what appears onscreen. Without considering how well the same idea has been done before, generally ignoring film history, and simply allowing the movie to produce its intended result (i.e. laughter), the right audience might find some redeemable qualities in this remake. But when the ability to disconnect any memory of the 1963 original falters, we realize the movie is just another way for Hollywood to cash-in on a familiar and surefire product.

Some might find Steve Martin’s portrayal as the bumbling Inspector Clouseau hilarious. And, I suppose, he’s funny in that zany Steve Martin from The Jerk way, versus the restrained irony of L.A. Story way. Although, thinking back to Blake Edwards’ original, featuring Peter Sellers in all his understated glory, suddenly we realize the role isn’t about fart jokes or suppressing a French accent while attempting to pronounce “hamburger.” Sellers made the role about quiet gags and sly expressions, a perfect caricature of an accent without making his parody obvious. The differences between Sellers and Martin are as polarized as Monsieur Hulot and Ace Ventura.

Inspector Clouseau isn’t a role any actor can jump into and make their own. Sellers and Edwards defined its reaches in the early sixties, and over the years actors Roger Moore and Roberto Benigni have failed to reestablish the character to no avail. What made Martin think he, in all his wild-and-crazy-guy-ness, could capture what Sellers made iconic? Whatever went through his mind, it worked. Not because the remake is a comedic revelation, because it isn’t. Rather because the film shockingly succeeded at the box office and already has a sequel on the way.

After the famed Pink Panther diamond is stolen from soccer coach Jason Statham, who ends up dead after his dialogue-less cameo, Chief Inspector Dreyfus (Kevin Kline, sporting a mustache and ridiculous accent) devises an inane plot to promote “village idiot” Jacques Clouseau to Inspector over the case. Dreyfus’ plan has something to do with getting an honorary award, but the scheme doesn’t make much sense, aside from being a pathetic way of introducing Clouseau. Anyway, keeping an eye on the new Inspector is Detective Ponton (Jean Reno, making his obligatory appearance in an American production set in France) and Dreyfus’ secretary Nicole (Emily Mortimer), though her gaze is far less business-oriented.

As you might have guessed, Clouseau’s idiocy knows no bounds. Numbskulling his way through the case, he propels small calamities into utter disasters. Take the scene where he interrogates a potential murderer with the good-cop/bad-cop routine—except, he plays both parts himself. Or when he prepares for an evening of love with Jason Statham’s widow, played by Beyoncé Knowles, and loses his last Viagra pill down the drain. And throughout there are stabs at the French, such as the photographs behind Dreyfus’ desk, which feature him with notable world leaders, among them Saddam Hussein. These jokes provide some chuckles, but they’re not guilt-free.

Indeed, we’re quite ashamed after the movie is over, likely because, admittedly, we laughed more than we probably should have. Shawn Levy (Night at the Museum) helmed the picture from a script by Martin and Len Blum, and all the talents involved imbue a staggering sense of over-the-top, which is contradictory to Sellers and Edwards’ original picture. So ask yourself the following questions: Did I see the original The Pink Panther? Do I enjoy stupid, base humor? Do constant jabs at French society appeal to me? If you answered No, Yes, and Yes, then you might enjoy this remake.