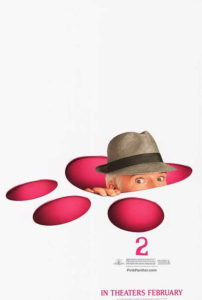 The Pink Panther 2 is a comedy that doesn’t make an effort to make us laugh. The setups rely on outlandish physical humor and fall flat, and by flat I don’t mean that an anvil falls on Inspector Jacques Clouseau’s head, compressing him into a cartoon-like accordion. Rather, it’s just not funny. Steve Martin continues his uninspired performance as the Inspector, complete with an intentionally bad French accent, over-the-top stupidity, and plenty of redundant references to his poor pronunciation of “hamburger.”

The plot concerns an elusive and legendary thief dubbed “The Tornado” who stole the Magna Carta, the Shroud of Turin, and the Emperor’s sword from Japan. Guess where he’s going next? If you’re dialing up Nicolas Cage to preemptively filch the Declaration of Independence, you guessed wrong. To protect France’s Pink Panther diamond, numbskull Inspector Clouseau is assigned the case by Chief Inspector Dreyfus, who in the previous entry was played by Kevin Kline doing his best French accent. But Kline had enough sense to jump from this sinking ship, and so he’s replaced here by John Cleese, who doesn’t even bother trying to hide his outright British tongue.

Sporting an international cast, the movie prefers to present celebrities versus characters. Clouseau partners with a “Dream Team” of detectives from all over the world, played by the likes of Andy Garcia, Alfred Molina, Yuki Matsuzaki, and India’s “Most Beautiful Woman in the World” Aishwarya Rai Bachchan. Each represents their respective countries with ingrained stereotypes. Jeremy Irons appears briefly and pointlessly as the suspected thief. Emily Mortimer and Jean Reno return as Clouseau’s secretarial love interest Nicole and sidekick Ponton, respectively. And Lilly Tomlin plays an instructor of political correctness who attempts to cure Clouseau of his mild racism and sexism, albeit unsuccessfully (thus sending the message to children in the audience that racial and sexual stereotypes are charming and inevitable).

What baffles me is how notable celebrities are duped into appearing in such garbage. Whoever convinced them to sign up, whether it was based on the script (unlikely) or hefty paycheck (probable), should be commended for their powers of negotiation. Perhaps next this person will persuade Judi Dench to play Spongebob Squarepants in the live-action version of the popular cartoon. Or maybe they’ll talk Russell Crowe into playing little orphan Annie, complete with ginger curls and a bright red dress. Whatever their next move, Hollywood has a master of persuasion in their corner. Actors and audiences beware.

Of his two franchises launched in 2006, Shawn Levy, director of the initial The Pink Panther remake, chose to follow Night at the Museum’s blockbuster success by directing its sequel (due May 2009) and leave the less diverting of the two for the amateurs. Said amateur is helmer Harald Zwart, whose only notable credit is Agent Cody Banks from back when Frankie Muniz had a career; Zwart is also behind the upcoming remake of The Karate Kid.

There’s little Zwart can do to improve the script, penned by first-time writing team Scott Neustadter and Michael H. Weber, even if it was touched-up by Martin in an attempt to add humor. The physical gags, such as when Clouseau is thrown over the Seine by a car, or the ongoing joke about Clouseau’s karate wars with Ponton’s children, are absurd, unfunny, and grow tiresome within moments. But we can hardly blame Zwart. It’s doubtful even Blake Edwards could have made these gags humorous.

The trouble with comedies like The Pink Panther 2 is their laziness, which never avoids being obvious and insulting despite the belly laughs they generate from children too young to know better and adults without much going on upstairs. And that’s about the limit of their reach. Everyone not in those categories should rent one of Peter Sellers’ first two films in the franchise (The Pink Panther (1963) or A Shot in the Dark (1964)); yet even these films beat the dead horse by rehashing material to sickening degrees as sequels continued to be released. At least the old string of comedies had two hits; these Martin remakes reached their low right off the bat.