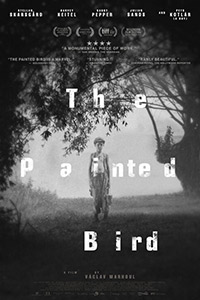 Time and again, ambitious directors have shown that so-called unfilmable novels can be reimagined for the screen. Though, individual results may vary. In the latest example, Czech filmmaker Vaclav Marhoul adapts Jerzy Kosinski’s 1965 novel, The Painted Bird, a controversial text whose authenticity has been contested. Did the Polish-American author experience the events in his book, or did he deliver something more akin to autofiction or even plagiarism? A half-century and a book-to-film adaptation later, the authenticity of the source material hardly matters. The emotions it produces cannot be denied. The lessons of the text, which follows a young boy across a thankless Eastern European landscape during World War II, present a searing indictment of humanity’s capacity for cruelty. It’s no challenge to imagine why producer-writer-director Marhoul was drawn to the book’s vivid descriptions in Kosinski’s prose. They ignite the mind’s eye and create unforgettable imagery, often haunting in its unrelenting barbarity. Marhoul’s film is technically faithful to Kosinski’s novel, but what it desperately needs is artistic translation.

The film, unfolding over nearly three hours of repetitive scenes and tonal monotony, and set to the pitch of devastation and emotional scarring, establishes its tenor in the first sequence. The nameless, preadolescent protagonist (Petr Kotlár), cradling a cherished ferret friend, finds himself chased by a group of older boys in the forest. When they catch up to him, the other boys knock out his front teeth and burn his animal alive. It’s a moment that recalls the children torturing scorpions on an anthill in the beginning of The Wild Bunch (1969), and it sets the mood that follows. The boy’s parents have left him with an older woman named Marta (Nina Šunevič) on an isolated farm. But she will soon die, leaving him to pass from one caretaker to another. With each new encounter—separated into chapters, each named for the next person on the boy’s grim odyssey—he learns another harsh lesson about the baseness of others. The first stop lands him in the employ of Olga (Ala Sakalova), an old medicine woman who buys him from a village. Grinding down teeth to make cures and aiding in Olga’s rituals—or when Olga buries him up to his neck to break a fever, leaving him helpless against attacking ravens—seem like downright pleasant interactions compared to what comes next.

The boy’s journey takes on a cycle of blackness, like a record caught on repeat. He finds shelter with a miller (Udo Kier), who suspects a worker of making eyes at his wife, so the miller gouges out the man’s eyes and ruthlessly beats his wife. The boy then stays with a farmer (Julian Sands), and unbeknownst to the sympathetic priest (Harvey Keitel, his voice dubbed) who left him there, the farmer is a torturous molester. Even the brief respite he finds with a young woman, Labina (Júlia Vidrnáková), contorts into a sordid and debauched episode. Everywhere the boy goes, he’s an outsider. His presence in this world is suggested by the scene that inspired the title, when a man releases a marked bird into a flock. Recognizing that the painted bird does not belong in their ranks, the others swarm and attack. When the Christian peasants look at the boy, they do not see a child in need of help; they see only his dark hair and eyes, which they associate with the “eyes of the devil” or a vampire—the characteristics of someone with Jewish or Romani heritage. They poke him with pitchforks and shout Anti-Semitic slurs. Unfortunately, in his almost entirely muted role, Kotlár rarely reacts to the hate thrust upon him, leaving his character to behave like an icon of innocence lost. 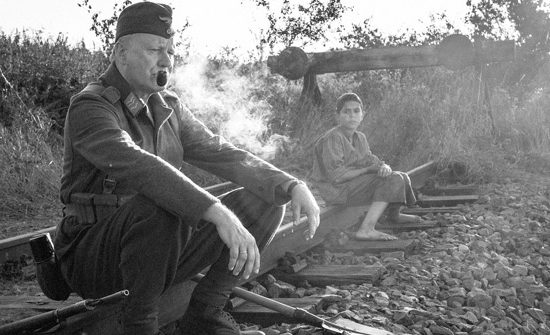 About two-thirds into the picture, viewers will recognize actor Aleksei Kravchenko, star of Elem Klimov’s unflinching Soviet antiwar film Come and See, in a brief role as a Russian soldier. Klimov’s harrowing work from 1985, about a young teen who enlists and experiences one trauma after another on the Belarusian countryside, doubtlessly inspired Marhoul in his treatment of Kosinski’s novel. But where Klimov’s urgent aesthetic immerses viewers in the deepening psychological wounds through dazzling and visceral camerawork, further evident with each new wrinkle and increasing paleness on Kravchenko’s face, Marhoul keeps the viewer at a remove. The Painted Bird’s high-contrast monochrome camerawork by Vladimír Smutný, shot in Cinemascope and 35mm, is unquestionably beautiful and labored over, making every frame admirable for its composition and stark use of shadow. But these images feel unsuitably pristine for such punishing subject matter, as though the sheer visual sense distracts from each individual sequence. And Kotlár’s stoic expression, behind his wide, observational brown eyes, fails to capture Kosinski’s first-person prose that so thoroughly explored the ongoing internal workings of the book’s central character.

Moreover, Marhoul seems to borrow from several well-known sources of cinematic misery, giving The Painted Bird an odd pastiche quality. Try not to think of Steven Spielberg’s Schindler’s List (1993) when the boy ends up in a sewage pool or Saving Private Ryan (1998) when Barry Pepper makes an appearance as a Soviet sniper. Marhoul’s balance of atrocity and visual splendor in black-and-white, all witnessed through the eyes of a young boy, undoubtedly takes hints from Andrei Tarkovsky’s Ivan’s Childhood (1962) as well. And there’s a painterly quality to the proceedings that recall peasant scenes and grotesques by Pieter Bruegel; more than once, the film offers a close-up of a wrinkled face or a nasty mouthful of rotting teeth. After all, Kosinski’s book was less about the specifics of World War II than exposing the lower depths of humanity, which distend and corrupt even more during wartime. Morhoul reflects this on decrepit bodies and slop-ridden landscapes. The film also lacks a score, so every searing image speaks for itself, albeit with callous austerity. By contrast, it’s nothing short of odd, if not unexpectedly funny and distracting, when the Wilhelm scream can be heard during an otherwise confronting German raid of a small village.

Beyond the general atmosphere of xenophobia and inhumanity throughout, the boy finds himself either a witness of or victim to pedophilia, suicide, bestiality, rape, animal execution, and mass murder. The nicest character on his journey might be a Nazi played by Stellan Skarsgård. And though his parents miraculously survive the Nazi’s final solution and recover him in the end, the lasting effect remains somewhat vague, other than representing the boy as a silent witness to humanity’s lowest behavior. Kosinski would later write that, though some believed stories from World War II had been “embellished,” he knew that “the real events had been far more brutal than the most bizarre fantasies.” Even so, the film’s cold rendering of passages from the book never gets inside the boy’s headspace, which might have been achieved with voiceover or a more expressive performer. It’s all shot with uncommonly gorgeous photography that demands appreciation, even if it’s captured in a mode of European art film that feels self-conscious and hollow in Marhoul’s hands. Worse, the presence of other, more impactful films about the human toll of war cast a heavy shadow over The Painted Bird, which seems to want desperately to approximate their effect, while relishing every grim detail of Kosinski’s book.