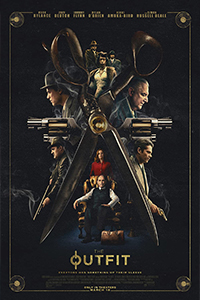 The Outfit opens in 1956, on a wintry Chicago street, outside a modest shop window that reads “L. Burling” and “Bespoke.” Enter the tailor, Leonard Burling, played by Mark Rylance in his latest understated, mannered role. Though, Leonard prefers to be called a “cutter.” The distinction, he explains in voiceover, is that anyone who can sew a button can be called a tailor. But his skill goes well beyond superficial details. Leonard is a skilled craftsman who apprenticed on Savile Row before immigrating to America after the postwar culture switched to cheap blue jeans. Being a superior cutter means he’s also an observer of humanity—the customer’s body type, skin tone, ambitions, and whether he appears “comfortable in his station” inform how Leonard makes a custom suit. So what does Leonard observe about the Irish mobsters who use his shop as a drop point for protection payments and other mysterious packages? The answer, it turns out, is everything.

Graham Moore, best known as the Oscar-winning screenwriter of The Imitation Game (2014), delivers his directing debut with The Outfit. Modest yet tricky, it’s a crime movie that holds its secrets like a little boy cupping his hands, smiling with a devilish grin as he approaches someone he knows will shriek when he reveals the toad inside. Moore’s characters have secrets; his plot has twists and turns abound, and he wants you to know it. But can you figure them out? The movie doesn’t think you can, despite its limited setting and few characters. Apart from two bookend scenes establishing the Chicago location, Moore contains the entire film inside the three rooms of Leonard’s shop—the reception area, the showroom, and the workshop. Accompanied only by his assistant Mable (Zoey Deutch), who dreams of escaping the Chicago neighborhood where she grew up, Leonard’s delicate, intentional, and slow movements produce the finest results. And business is good.

After all, Leonard’s first customer was Roy Boyle (Simon Russell Beale), the head of Chicago’s Irish mob. Besides using Leonard’s shop to pass packages, Boyle and his criminal associates dress in Leonard’s bespoke suits and help the business thrive. However, there is a downside: Leonard must also cater to Boyle’s son Richie (Dylan O’Brien), a cowardly shadow of his father, and Francis (Johnny Flynn), an ambitious henchman. The Outfit kicks into gear when Richie and Francis arrive at the shop one night, the former wounded by gunfire from a rival gang, the LaFontaines. Francis holds Leonard at gunpoint, ordering him to sew up Richie’s wound. Richie and Francis have an audio recording meant for Roy, which contains the identity of a rat in their organization serving as an FBI informant. Once they listen to the tape and eliminate the rat, this will ensure Roy’s place in the Outfit—a secret criminal organization started by Al Capone decades earlier. As the night unfolds and various parties come and go from Leonard’s shop, the tape disappears, and the bodies begin to pile up, one of which Leonard must conceal from Boyle in a wooden chest in his shop. 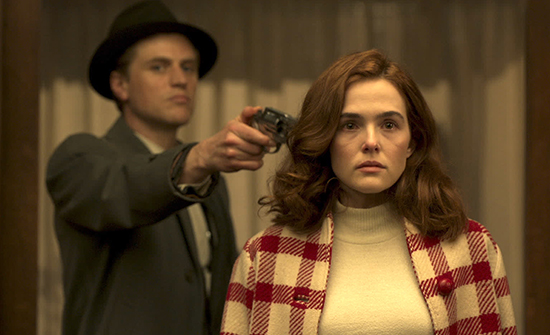 Moore’s dialogue makes unsubtle hints at things to come, inviting the viewer to figure out what’s happening and who’s responsible. However, since only a handful of characters occupy the movie, a few (but not all) of the reveals become predictable. For instance, Leonard’s voiceover hints that he’s more than meets the eye by describing suits as more than a jacket and pants. There are 228 steps to creating a suit, he explains. How many facets to Leonard are there? So we watch knowingly as the gangsters dismiss him. He could never be the rat, they rationalize; he’s “just a fucking tailor”—a line that echoes how Billy Bob Thornton was “just a barber” in the Coen brothers’ The Man Who Wasn’t There (2001). However, when LaFontaine (Nikki Amuka-Bird) arrives later, she observes that he’s “always listening, always watching” and that “no one stops to think about what’s going on in his head.” And indeed, Leonard seems oddly capable of manipulating everyone with sly observation and shrewd logic, pitting them against each other.

Alternatively, Moore’s strategy of telling not showing finds Leonard revealing mysterious details about his past, often unprompted. Leonard doles out backstory when Moore decides it’s necessary—and rarely when it feels organic to the character or the plot. For a character who spends most of his time sitting off to the side, preparing his latest garment, Leonard proves chatty and open to discussing his past with customers he admits are “not gentlemen.” This becomes conspicuous late in the movie when someone points a gun at Leonard, intending to kill him. A fire has started to consume his shop, and time is running out. But the pivotal moment comes to a screeching halt when Moore neutralizes its potential suspense for Leonard to supply even more backstory, resulting in a ridiculous incongruence.

If this small-scale scenario seems like it might function better on a stage than cinema, that’s true enough. The performances feel broad, as though the actors want to reach the back row. Most of the Chicago accents sound like stage performances, too, O’Brien’s above all. Only Rylance and, to a lesser degree, Deutch, supply convincing performances. Apart from the few more engaged flourishes near The Outfit’s end, Rylance occupies a pulpier version of his quiet and inward role in Bridge of Spies (2015), which earned him an Oscar. Of course, everyone looks sharp. Fashion designer Zac Posen worked with costume designer Sophie O’Neill to create the movie’s luxurious suits. But the characters look like they’re wearing theatrical costumes rather than clothes worn by real people. Nearly every detail in Moore’s mise-en-scène suggests a theatrical production—even his nods to Alfred Hitchcock’s stagey Rope (1948), another film shot in a single location and, like The Outfit, featuring a dead body hidden in a large wooden chest for much of the runtime.

The Outfit yearns to become the next clever crime movie in the vein of The Usual Suspects (1995), complete with a finale that doesn’t so much blow one’s mind as arrive at the inevitable conclusion. Throughout, the movie oversells every thinly veiled secret, every twist, and every reveal. Moore doesn’t allow the viewer to make discoveries or experience an emotional journey; rather, he turns the viewer into a receptacle of plot information, which his script administers with all the grace of a conveyor belt. In the end, what we learn about Leonard is superficial, better explored in thematic terms by David Cronenberg’s films A History of Violence (2005) and Eastern Promises (2007)—films about men whose exterior disguises their deep, dark secrets. Had the writer-director been more interested in exploring his characters, rather than using them as players in predictable games of plot, The Outfit might have proved more engaging and allowed more appreciation for the finer details in the acting and production. Instead, his elaborate and disappointing arrangement distracts from the title’s otherwise compelling notion about the outfits we wear to disguise our true selves.