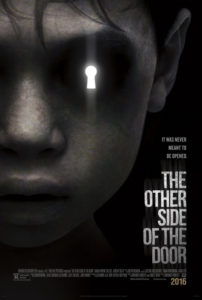 Whenever Americans visit other countries, they seem incapable of respecting local customs and mythologies, and through their bungling, they usually end up disturbing the balance between the living and the dead. This seems to happen all the time in horror movies. Earlier this year, The Forest explored a similar concept and, if there’s a point to be gleaned from The Other Side of the Door, it’s that Americans have little respect for the supernatural realm. This D-grade horror yarn boasts a beautiful Indian setting but relies on tired old formulas and jump scares, none of which prove effective thanks to the ham-fisted direction of Johannes Roberts. In the end, we’re left to believe that Americans should just isolate themselves from other cultures, since our insistence on meddling with supernatural forces knows no limit.

Worse, with all the talk of Hollywood’s lack of ethnic diversity, telling a story about two white people in the middle of an Orientalized culture doesn’t bode well for this familiar fare. On vacation in India, Americans Maria (Sarah Wayne Callies) and Michael (Jeremy Sisto) decide to make it their permanent home. Six years later, they’ve lost their eldest child Oliver (Logan Creran) in a tragic accident. While their younger daughter Lucy (Sofia Rosinsky) survived, Maria remains inconsolable and eventually attempts suicide out of grief. The family’s housekeeper Piki (Suchitra Pillai-Malik) understands Maria’s feelings, having lost a child herself. And so, she gives Maria a way to say goodbye to Oliver.

Piki tells Maria of a remote Hindu temple where, if she spreads Oliver’s ashes on the front steps and then locks herself inside, she will be able to communicate with Oliver’s spirit. But there’s a catch. Maria must remain behind the temple’s locked front door. Opening it will upset the balance of the underworld. Of course, when Maria carries out this ritual, she ignores Piki’s advice and opens the door. The outcome warps Oliver’s spirit into an evil thing that haunts Maria and Michael’s home. What follows is quite run-of-the-mill: Maria investigates ominous sounds in the night, chairs move on their own, lights turn on at random, etc. Meanwhile, the four-armed guardian of the underworld comes looking for Oliver’s escaped soul, and mysterious Aghori gurus appear around the family’s house—both underdeveloped concepts of Indian mythology and mysticism tapped for nothing more than shamefully Orientalized terror.

It’s hard to believe 20th Century Fox produced and released The Other Side of the Door, in part because the movie looks shoddy and unprofessional. Night scenes appear distractingly grainy and even blurry, as though shot with an iPhone. Cinematographer Maxime Alexandre delivers a digital presentation that looks like VHS tape poorly transferred to DVD. The cast is cheap, even for low-budget horror. Just because Callies starred, for a while, on AMC’s The Walking Dead doesn’t mean she can command a whole feature. (Lauren Cohan was far better at achieving the same task with this year’s The Boy.) She’s a fine actress, but hardly a leading lady. Sisto, too, seems aloof and not present in his role. Perhaps because Michael remains largely absent with his work as an antiques dealer, leaving Maria home to encourage the spiritual realm. Pillai-Malik has one of the only Indian speaking roles in a movie set in Mumbai.

Writers Roberts and Ernest Riera pick and choose pieces of Hindu mythology to serve their story, lending little by way of cultural education or awareness for the audience. Indian people and their culture are never anything more than strange and other-worldly throughout The Other Side of the Door, despite Michael’s apparent embrace of the culture for his work. Cultural offenses aside, the movie is also exceedingly predictable in its horror elements, and curiously R-rated, despite a lack of violence, swearing, and nudity. By the time the final scenes involving a possessed Rosinsky come to pass, the audience is unintentionally laughing at the silly child performance, the generally derivative storyline, and the blatant cultural insensitivity. Along with an unsurprisingly stupid ending, The Other Side of the Door is bound to be forgotten by those who can get through its 96-minute runtime without walking out of the theater or shutting it off at home.