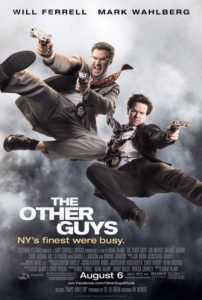 It’s hard to be excited about Will Ferrell movies. Often he’s playing the same role, that idiotic buffoon who always seems to be yelling nonsensical absurdities with the immovable ego of an aggressive child. There’s almost no distinguishing his characters from Land of the Lost, Old School, or Step Brothers, except they all derive from the same mind-numbingly tiresome source of comedic antics. Ferrell finds a way of being (almost exclusively) in movies that last for a half-hour, maybe less, before becoming annoying. So it’s with a sense of surprise that Ferrell’s latest, The Other Guys, manages to, for the most part, entertain more than it annoys.

The biggest, baddest hero cops in the NYPD are Highsmith (Samuel L. Jackson) and Danson (Dwayne Johnson), two media-fed models of testosterone worshiped by the entire police force. Imagine if the cops from Die Hard, Lethal Weapon, and Shaft were spliced together; that’ll give you some idea of their abilities. Then, on the opposite end of the police spectrum, there are Gamble (Ferrell) and Hoitz (Mark Wahlberg), one a satisfied desk jockey and the other an enraged ex-hero who can’t stand that he’s been chastised into being a paper pusher. When Gamble and Hoitz attempt to fill the shoes of tragically befallen Highsmith and Danson by pursuing a big case, their superior, Captain Gene (Michael Keaton, in a supporting role that makes us wish he hadn’t all but disappeared from Hollywood), offers them advice: “Don’t go chasin’ waterfalls.” All of their Captain’s guidance curiously comes from TLC lyrics, a baffling reality that perplexes the inexperienced detectives.

Director Adam McCay, a former writer on Saturday Night Live and helmer of both Anchorman and Talladega Nights, brings on the usual silly, sometimes random humor of a Will Ferrell comedy but to lesser extremes than his normal work, which is often exaggerated beyond all levels of tolerance. Underneath the inane jokes are characters and even a police investigation that offers the movie’s structure some cohesiveness. There’s a hilarious example of slapstick during a funeral scene, where cops fight amongst each other in silence, shouting through whispers. And there’s an ongoing joke where Ferrell somehow attracts beautiful women (his wife is played by Eva Mendes), whereas Wahlberg remains single and lonely—quite the opposite of his cameo in Date Night, another movie that proves the actor’s normally blah presence might be better served by self-parody.

The details of the case, as if they mattered next to the comedy, involve an elaborate scam in the financial district. Steve Coogan plays a slimy equity fund guru who hopes to cleverly shift around $32 billion to repay his debts, owed primarily to a Wall Street capitalist played by Anne Heche. Then, playing over the end credits in bold graphics and charts are statistics about various real-life government bailouts, corporate crimes, and financial schemes. The filmmakers hope viewers will think deeply about these maddeningly notorious incidents, as if an audience that has just experienced The Other Guys is ready to think deeply about anything. While the intentions were noble, the placement of these statistics feels inappropriate; perhaps they should have come at the beginning of the movie, before the audience’s brains were lambasted with stupid humor, or perhaps throughout, serving as connective tissue to replace the dull narration by Ice-T.

Only a few months ago, Kevin Smith attempted his own buddy-cop-comedy-spoof with Cop Out, a dry and flavorless movie that forgot a crucial component of the genre: action. Smith has proven time and again that he’s not an action director (e.g. Dogma), and McKay doesn’t propel himself into the realm of Tony Scott or Michael Bay either. But at least McKay makes the film visually interesting, with one or two scenes of action that are worthy of mention, and some flair behind the camera during a frozen bar scene recalling the opening credits of Watchmen. On its own, The Other Guys may not deserve much more than momentary praise, but in comparison to the drab quality of Cop Out, or Ferrell’s other recent work, the result has more laughs and energy to deserve a casual recommendation.