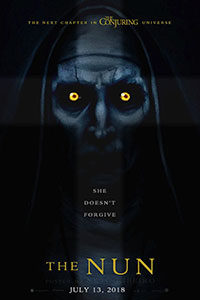 In The Nun, the scares take place in and around an eerie Romanian abbey. The year is 1955, and the bombings throughout Europe in the previous decade have left the abbey in shambles. It’s surrounded by crucifixes that seem to be keeping something inside, as opposed to declaring the holiness of this place. Graves with crooked crosses have bells attached to them, a method used in the centuries before to determine if someone had been buried alive. Just outside the entrance, fresh blood that never dries has splattered the steps. Inside, long decrepit hallways filled with an uncanny fog lead to forbidden doorways, behind which resides an unspeakable evil. It’s the perfect spookhouse setting, drawn from the tropes of Gothic tales that appeared in Hammer Film Production classics decades ago. Except, the filmmakers of The Nun resolve to turn these atmospheric details into a dull machine that produces a familiar set of jump-scares, pan reveals, and characters who do little more than investigate mysterious noises in the dark.

New Line Cinema and producer James Wan’s “Conjuring Universe” continues to expand with this latest prequel, a spinoff meant to provide an origin story for the frightening, habit-wearing demon from The Conjuring 2 (2016). The movie maintains the franchise’s track record thus far, where titles with “The Conjuring” in them lead to better experiences than those without. The files of investigators Ed and Lorraine Warren have led to some real-life paranormal mysteries, and Wan cleverly exploited them for his 2013 hit The Conjuring and its sequel. But the spin-offs such as Annabelle (2014), and its slightly better prequel Annabelle: Creation (2017), do little more than remind audiences that they’re excited about the next Conjuring movie. Regardless, New Line Cinema commits to proving backstories to the specters and hellish spirits that have even a cursory presence in the main entries. Hence, the screenplay by Gary Dauberman, based on a story he conceived with Wan, fanes relevance by demystifying its eponymous spectre—an all-too-common trend in modern horror sequels and prequels.

After a prologue in which two nuns of the Romanian abbey succumb to a demonic presence in the castle’s depth, officials at the Vatican assign Father Burke (Demián Bichir) and Sister Irene (Taissa Farmiga) to investigate. Father Burke travels the world, exploring strange spiritual phenomena, while the inexperienced Sister Irene, who has yet to take her vows, is assigned to the case for reasons that remain unexplained. They arrive in Romania, greeted by their French-Canadian guide, absurdly nicknamed Frenchie (Jonas Bloquet, from Elle), and discover the dreaded abbey in disrepair. The locals spit on the ground at even the mention of it. Inside, the unwelcoming nuns, led by a shrouded Mother Superior with the voice of a possessed Linda Blair, pray endlessly to suppress the evil that lurks beneath the abbey. As it turns out, only a vial of Jesus Christ’s blood, the story’s MacGuffin, can stop the subsequent onslaught of demons and possessed nun, all led by an ancient baddie sent directly from Hell. This information is delivered in an unintentionally funny vomiting of exposition that becomes more laughable as it keeps going.

In terms of story, not much more occurs beyond this thin plot synopsis. Much of The Nun‘s 96-minute runtime unfolds overnight, as Father Burke and Sister Irene (and don’t forget Frenchie!) feel compelled to leave their bedrooms and search in the dark, lantern in hand, for some unidentified noise (although one wonders why, in 1955, they weren’t using unreliable flashlights). Their nocturnal exploration of the haunted abbey gives the resident evil the perfect opportunity to terrorize our heroes. Hovering shadows creep in the background, out of focus, followed by something jumping out from the dark. It’s not just ghosts or demons either, but a series of nasty possessed nuns that bite like zombies. “I’m afraid there is something very wrong with this place,” says Father Burke, not long after he narrowly survives one of the demons burying him alive. All the while, Abel Korzeniowski’s score strikes jolting pangs at these moments, causing an involuntary reaction, but it’s hardly fear or terror felt by the viewer. The cinematography by Maxime Alexandre, who has a long history of shooting murky darkness in his string of horror movie credits, makes good use of the Romanian locations for a spookily effective visual aesthetic.

It’s worth noting that The Nun doesn’t provide a clear origin for its titular character, regardless of whether that title refers to the demon or Sister Irene. It’s also confusing that Taissa Farmiga, a talented performer to be sure, is the younger sister of Vera Farmiga, who plays Lorraine Warren in The Conjuring titles—an extratextual detail that leads one to ponder throughout whether Sister Irene is Lorraine Warren. Ultimately, The Nun is a brief ride of foreseen jump-scares and uninvolving narrative turns. It’s the sort of horror movie that expects its audience to ignore offensive clichés, such as when the characters split up to cover more ground in the dark. Despite its talented cast and the chilling location, neither director Corin Hardy nor the screenplay engages the viewer in any memorable or substantive way. At least science can provide some reassurance: Even though the universe is now expanding, someday, if gravitational laws prove true, it will contract and collapse on itself. Perhaps the same is true of movie universes.