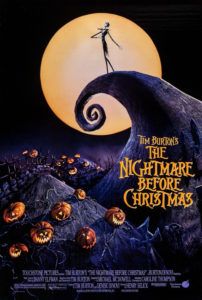 Imagine Rankin-Bass Productions, like that mandatory annual great Rudolph the Red-Nosed Reindeer, hijacked by macabre sensibilities and a devilish flare for the grim (and the Grimm). All those innocent characters become twisted and torn apart, and then reassembled with skeleton frames, sewn with Frankenstein-like stitches, sport wart-ridden noses, and have a deep hunger for blood. And yet, they remain sweet and lovable, even in their ghoulish and morbid form. Tim Burton conceived such an idea in 1993 with The Nightmare Before Christmas, which draws inspiration from everyone’s favorite yearly holiday television specials and maintains its cult fandom to this day. Though initially envisioned as a TV special in the realm of his inspiration, Burton teamed with former Disney animator Henry Selick, and together they developed his original story ideas into a feature.

Though working as a producer, the film’s title would be prefaced by “Tim Burton’s” to underline his essential stake in the creative process. However, Selick took the director’s credit, as Burton had committed himself to Batman Returns when production began, and, admittedly, Burton sought to avoid the painstaking stop-motion process, which in this case took two years to complete. Instead, Selick dedicates himself fully to Burton’s vision, adding his own personal touches to incubate and eventually hatch that vision. Not a constant presence on the set, Burton was conspicuously absent, leaving any hands-on input and the production’s overall realization to the imaginative Selick, whose later work on James and the Giant Peach (1996) and the underwater scenes in The Life Aquatic with Steve Zissou (2004) better illustrate his own colorful strokes.

Compare the visual result of The Nightmare Before Christmas to any other Burton work, and it’s apparent the films are all imagined with the same crooked angles born from German Expressionism and other gothic sensibilities, like flipping through an artist’s sketchbook. There are misunderstood but sympathetic characters around every corner. We see familiar trees, leafless, with branches reaching out like undead fingers. The presentation is overflowing with elaborate, hilarious bleak set designs, which were as unique in their day as those in visionary pictures like Blade Runner and Metropolis were in theirs. It’s all distinctly Burton-esque.

The lovingly dark fable begins in Halloween Town, where after this year’s Halloween ceremony comes to a close, citizens begin to prepare for next year’s gala. Figurehead Jack Skellington (voiced by Chris Sarandon) serves as the town’s muse in place of inept mayoral leadership, but he finds himself tired of the same old bats and spiderwebs and so forth. One thing leads to another, and Jack discovers Christmas Town on a holiday crossroads of sorts. He returns packed with childlike enthusiasm about “Sandy Claws” and attempts to combine Halloween and Christmas into one joyously frightening occasion.

Former Oingo Boingo band member and obligatory Tim Burton composer Danny Elfman arranged the music and wrote the film’s ten songs, each deliciously filled with comical, gory detail. The outcome is comprised of a delightful collection of exceedingly memorable tunes. “This is Halloween” begins the lot with a thumping melody that even the film’s own characters hum. Ken Page’s voicework lends a jazzy air to “Oogie Boogie’s Song.” And Catherine O’Hara puts a melancholy touch on “Sally’s Song.” But it’s Elfman himself singing the gamut of Jack Skellington’s lyrics on “Jack’s Lament” and “What’s This?” that stir the audience the most.

Released by Walt Disney Pictures under their subsidiary label Touchstone Pictures, the film was a risky venture in its atmosphere alone. Scenes featuring Santa Claus kidnapped or disturbing character designs (one has an axe perpetually lodged in his head) worried studio execs. So they resolved to release the picture under the alternate label, distancing the product from otherwise family-friendly releases like Aladdin and The Lion King, both released within a year of Burton’s film. And while box-office receipts were profitable but not astounding, the payoff was around the corner because, as the years passed, a large cult following amassed. Based on the film’s increasing fanbase, which includes enthusiastic acclaim for the film itself and Tim Burton’s oeuvre, in 2006, the film earned new popularity with a new dimension. Remastered in Disney Digital 3D and newly titled The Nightmare Before Christmas 3D, the picture was released under the Walt Disney Pictures label. For three consecutive years, it’s been distributed around Halloween, earning the company a few million each time.

Superficial and none-too-impressive, the addition of 3D adds nothing to the film’s original magic. Without creating the gimmicky effect onset using appropriately-calibrated 3D cameras, watching the film feels less like animation in the round and more like a relief sculpture. This wow-less feature offers fresh audiences a chance to discover (or re-discover) a contemporary classic, but from an aesthetic point of view, the original release remains faultless. Given a choice between the theatrical re-release, wherewith I’m forced to endure uncomfortable plastic glasses and view sub-par dimensionality, or enjoy the film in pristine condition on the near-tangible clarity of Blu-ray, I’ll take the latter.

Cheerfully postmodern in its reinvention of classical holiday iconography, The Nightmare Before Christmas is a staple in my household. From year to year, viewings alternate between Halloween entertainment and gloomy Christmastime delight, stunning upon each revisitation with its meticulous detail and seemingly touchable animation style. In the days of computer-animated films that occasionally appear no different than your average videogame, looking back, we must appreciate that Tim Burton and Henry Selick created something so wonderfully original. Fifteen years later, it still draws audiences looking for a spot of red on their snowflake.