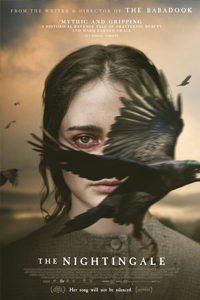 Jennifer Kent’s The Nightingale confronts the reluctance among many non-Aboriginal Australians, even some of the country’s historians, to acknowledge the full scope of atrocious violence in their past. Set amid a ruthless era of colonial settlements and penal colonies of the nineteenth century, Kent’s highly researched film refuses to deny the human casualties that helped form Australian identity. Many histories from the era, often written by white conquerors, framed the past and downplayed the extent of the genocide that occurred. But Kent looks fearlessly at the historical violence against the indigenous population and the convicts who suffered through their time in captivity, reframing the past as many recent historians have done. She contains this history inside an unflinching revenge story that unfolds in the thick jungles and natural splendor of Tasmania, where the deadliest predator is the white Englishman who claims ownership of the land and all its inhabitants. The Nightingale cannot help but feel like a confrontation, not only for its subject matter but also the visceral and almost punitive quality of the filmmaking. Kent recognizes that any form of reconciliation between Australia’s indigenous population and its colonists requires an acknowledgment of the country’s violent past, and she forces her audience to endure that past with terrible veracity.

To appreciate the scope and commentary of the film, some historical context is required. The colonial history of Australia follows a familiar path, where the subjugation and even eradication of an indigenous population becomes a vicious component to the development of a new nation. The invading settlers, in all their military superiority, wipe out the native people through racially motivated violence and even biological warfare (introducing European diseases, such as smallpox, into a population), taking the land for themselves. When British settlers arrived in Australia in 1788, they set about taking control over the ensuing Frontier Wars, leaving untold numbers of Indigenous Australians dead in a campaign that was less a war than a massacre. The remaining population of Aboriginals, tribes of people that had occupied Australia and Tasmania for tens of thousands of years, were nearly wiped out from this genocide—long before the “White Australia” policy instilled laws and restrictions on who should enter or even inhabit the country. Only in the last few decades has the Australian government undone some of the racial and ethic policies that sought to ensure a predominantly white population in the country, and few films have taken on this history with full recognition of its atrocities. 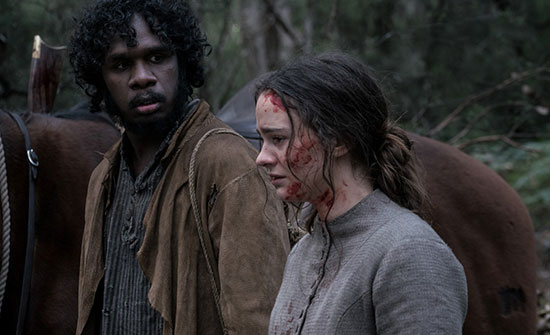 The Nightingale takes place in 1825 on Tasmania, then called Van Diemen’s Land, where the so-called Black War brought the island’s indigenous population to the brink. In her article “‘Hard evidence’: the debate about massacre in the Black War in Tasmania,” historian Lyndall Ryan suggests the massacre left “fewer than 250 Aborigines” alive on the island. But beyond the carnage that established the rule of British colonizers, the island was also a penal colony, where offenders were sent to live out their punishment under brutal conditions. The circumstances were particularly dire for convict women. Well outnumbered by the male population, women were bought and sold like commodities, subject to sexual enslavement and rape, treated like subhumans, and denied their rights to freedom even after the terms of their penalty had expired. Kent’s film is about an Irish convict, Clare (Aisling Franciosi), who was sentenced to several years for a petty crime and endures under the watch of the British officer Hawkins (Sam Claflin, frighteningly good). Not only does Hawkins refuse to grant Clare freedom after she serves her sentence, but he claims ownership over her body.

Cast against type, Claflin captures the desperate mania of a functionary trapped in his post and waiting for his own transfer, which he may never get, recalling the predicament of the titular character in last year’s Zama. His boredom and frustration sharpen into taking sadistic pleasure from the rape and psychological torture of Clare, a songstress at the local tavern. She’s the only beautiful woman in the colony, and Hawkins wants her to himself, so he refuses to sign her release papers. Her husband, Aidan (Michael Sheasby), a former prisoner whom Clare met on Van Diemen’s Land, wants her freed. They plan to move away with their newborn child and live happily ever after. But when Aidan confronts Hawkins, the retaliation for this perceived insult is severe. Joined by the witless and low-ranking soldiers Ruse (Damon Herriman) and Jago (Harry Greenwood), Hawkins prompts a violent home invasion that leaves both the baby and Aiden murdered, and Clare raped, beaten, and left for dead. It’s an uncommonly violent sequence that never conveniently cuts away to protect the viewer from something they cannot unsee, as other scenes of this type often do. Sam Peckinpah’s Straw Dogs (1971) came to mind.

When Clare comes to, she gathers her murdered child and reports the incident to the local authority, who replies in predictable fashion: “You expect me to take the word of a woman convict over that of an officer?” With that, she sets her ambition for revenge. She discovers that Hawkins has gone northward toward the comparatively modern town of Launceston, accompanied by his cohorts and guided by an Aboriginal Tasmanian named Charlie (Charlie Jampijinpa Brown). The journey takes several days, however, and Clare plans to catch up. She begrudgingly hires Billy (Baykali Ganambarr), an Aboriginal Tasmanian who will track Hawkins’ party, though she distrusts people of color just as much as Billy distrusts the “white devils” who slaughtered his entire tribe. What proceeds might seem to situate The Nightingale into the category of a sweeping revenge story modeled after a Western, something akin to Unforgiven (1992) or the spare beauty of John Hillcoat’s The Proposition (2005). But that idea suggests a genre exercise, which feels like the last thing on Kent’s mind. 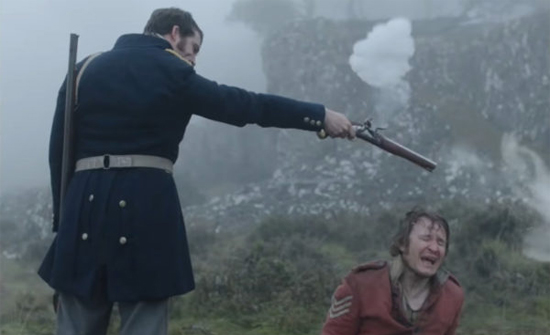 Instead of a traditional story of bloody retribution, The Nightingale deconstructs systems of authority, which historically place men over women, whites over people of color, superior officers over their subordinates, wardens over their prisoners, and the colonizer’s notion of “civilization” over the perceived savagery of indigenous people. Kent’s screenplay explores abuses of hierarchical power in each of these cases, negotiating the various states of agency held among them, while empathizing with those marginalized by the enforcers. Most of these relationships represent a grand illusion, engineered from ideologies rooted in sociopolitical interests, the preservation of power, and racism. Kent breaks down each of them in her film, demonstrating that concepts of race, gender, and political differences remain faulty concepts next to the baseline humanity that each of us shares. Over the course of the film, Clare and Billy, who initially despise each other, come to recognize and bond over their shared hatred of the British. At first, this reads as almost touching in service of the revenge story, almost a meet-cute between two friends. But by the finale, Kent goes further to deconstruct patterns of violence that ultimately prove self-destructive.

Kent’s aesthetics are just as penetrating and severe as her larger themes, and her devotion to historical realism and natural lighting render the period setting with convincing authenticity. The Nightingale also adopts the boxy Academy aspect ratio, most recently seen in Paul Schrader’s First Reformed from last year. The look, commonly associated with Classical Hollywood films, has recently been used by modern filmmakers (see Andrea Arnold’s Wuthering Heights) to evoke the past or suggest a closed-off, claustrophobic world. The aspect ratio makes Clare and Billy seem like figures limited by the scope of their surroundings—regardless of how expansive Radek Ladczuk’s cinematography in the Tasmanian wilderness may appear. The characters (who speak in English, Irish Gaelic, and Palawa Kani) also engage in violence from which Kent refuses to look away; several relentless beatings and rapes occur, and they will no doubt prompt walk-outs (as they did in my screening). But Kent understands that in order to heal from the violence of the past, audiences need to see and believe it—otherwise, the sheer number of Indigenous Australian deaths and crimes against women from this era become cold historical facts that feel removed from the present and too easily compartmentalized.

If a comparison can be drawn between this, Kent’s second feature, and her astounding 2014 debut The Babadook, a supernatural horror film about the nightmare of parenthood, it’s the prevalence of dreams in both. Other films tend to use dream sequences as cheap gotcha moments or jump-scares, and they’re almost always clichés. Kent uses them here in a hypnotic way that establishes lasting post-traumatic stress in Claire, demonstrating that damage of this kind does not fade away. During each night scene, Kent cuts away to glimpse the moon through skeletal tree branches and ominous clouds, signaling the film’s entrance into nightmare territory. In the first dreams, Clare hears the sounds of her rape, set to the tune of her baby crying for its life, followed by Hawkins’ threat: “Shut that baby up or I will.” Later, she sees the phantoms of her attackers and the ghosts of those she kills on her path to Hawkins. The dreams emphasize how violence scars the psychology of an individual, and a country, leaving an unshakable disturbance that cannot be healed by burying its memory or exacting revenge. 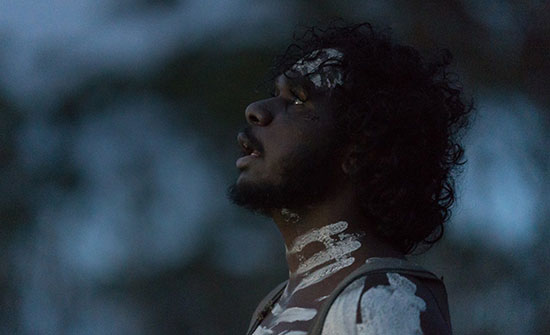 As a result of the film’s thematic ambitions, which reach beyond the basic tale of vengeance, The Nightingale has a structure that defies its logline. Of course, over the two-hour-and-fifteen-minute runtime, the film’s narrative thrust pushes the material forward, and this implants our desire to see the increasingly awful Hawkins receive his comeuppance. But at the same time, Kent’s measured approach forces the viewer to process the extreme state of Clare’s emotional evisceration, and the intentional pacing of the film gradually considers the world outside of her desire for revenge. The success of this approach is dependent on Franciosi’s layered performance, volleying between trauma and rage before settling into something more profound. Similarly, Ganambarr recalls the widespread killing of his people in sobering scenes, but the soul of his performance can be found in those desperate moments where he performs his tribe’s ritual dances that may mark the last time they will ever be performed. Later in the film, when a crucial moment does not go as planned, these characters must reset, and that’s when they begin to depend on each other beyond the urgency of the situation. The third act could be accused of meandering or delaying the final confrontation, but these scenes dig into something deeper.

Kent’s film begins with a straightforward story of eye-for-an-eye justice, but rather than reduce the material to an uncomplicated rape-revenge picture, she hopes to deconstruct the physical and sociological violence brought about by colonialism and penal colonies. Sometimes it materializes in the form of witnessing a barbaric crime in horrible detail; sometimes, the violence reveals itself in the language Clare uses when she addresses Billy as “Boy,” suggesting her superiority over her Indigenous Australian companion based on skin color, and the ideological assumption of authority in Western civilization. The relationship and shared trauma between Clare and Billy ache with symbolic meaning and emotional clarity, and each role is astonishingly well-acted. With a full appreciation of her country’s complicated past, Kent, an incredibly accomplished filmmaker after just two offerings, searches for a way to heal with The Nightingale. Her search is sublime in its ambition, wonderfully executed with notes of visual poetry and formal austerity, and sobering in its implications. To watch the film is to accept a merciless confrontation with colonial violence. It’s also a step toward healing.