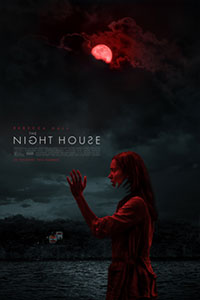 David Bruckner’s The Night House follows Beth, a grieving widow whose husband inexplicably committed suicide a few days earlier. His cryptic note said only this: “You were right. There is nothing. Nothing is after you. You’re safe now.” Beth, played by Rebecca Hall, has no idea what the note means. Propelled by loss, depression, and uncertainty, she investigates her husband’s life, searching for answers. She uncovers a trail of clues that lead to some dark secrets and strange, supernatural occurrences. Or maybe her grieving mind is playing tricks on her? The specifics aren’t so important as savoring her process, accented by Hall’s committed performance and Bruckner’s assured direction. Along with some striking visuals, The Night House creates an immersive and spooky mood that works in spite of some dissatisfying explanations in the last third.

The film opens with Beth returning to her house, which was designed and constructed by her late husband, Owen (Evan Jonigkeit). Tossing a sympathy casserole in the garbage and generously pouring brandy into a glass instead, she watches their home movies and pages through Owen’s notebooks, looking for answers. After all, she tells her friend Claire (Sarah Goldberg) that depression was her thing; Owen seemed normal by comparison, making his suicide so unexpected. At the same time, Beth’s mind plays tricks on her. First, she finds muddy footprints on the dock and hears phantom gunshots—as though her mind was replaying Owen’s suicide. Then, one night, she receives texts from Owen’s phone telling her not to be afraid, prompting her to find the device. When she does, she finds that Owen has taken pictures of other women who look suspiciously like her. Despite Claire telling her to move on, Beth begins to question the man she loved.

Bruckner, who has worked almost exclusively in horror, started out making intense segments in the anthologies The Signal (2007) and Southbound (2015). His segment “Amateur Night” from V/H/S (2012) was expanded to the full-length Siren in 2016, although he didn’t direct it. Instead, he made his feature debut with 2017’s The Ritual, a solid work of folk horror steeped in Norse mythology and human sacrifice. With The Night House, Bruckner demonstrates that he can manage less gory fare and operate in a more ambiguous realm. The script by Ben Collins and Luke Piotrowski allows the scares to build slowly and place character first. In that respect, the film plays like a classic haunted house yarn—Shirley Jackson’s The Haunting of Hill House came to mind—where the audience has good reason to doubt the protagonist’s mental health. But don’t get used to Bruckner’s shift from bloody horror to more nuanced fare; his next project is a remake of Hellraiser.

The Night House combines Beth’s waking dreams with night terrors to disorienting effect in the second half. Bruckner and his cinematographer, Elisha Christian, come up with some unnerving imagery to suggest ominous figures hiding in negative space, framed by walls, columns, and the curves of moulding and trim. She feels something in her house, but her friends and kindly neighbor (Vondie Curtis-Hall) assume it’s the grief talking. We cannot help but think of last year’s The Invisible Man (2020) and its streak of plausible paranoia. Does Beth see things? Or is it Owen’s ghost that reveals itself to Beth? Or maybe it’s some other presence entirely. And what does Beth make of Owen’s interest in occult books or women who resemble her? Or the unfinished house he built on the other side of the lake? The answers to these questions don’t amount to much, but Hall conveys them so well that it hardly matters.

The Night House is also yet another testament to Rebecca Hall’s skill. Somehow, she still seems underappreciated, despite working with Steven Spielberg, Christopher Nolan, Stephen Frears, Ben Affleck, Shane Black, and Ron Howard. She has given achingly overlooked performances over the last two decades, among them her turn in Christine (2016), playing the real-life journalist who shot herself on the air. She’s also the secret lead of Vicky Cristina Barcelona (2008), though she went overlooked next to Penélope Cruz and Scarlett Johansson. Commanding almost every scene in her new movie, Hall returns to the realm of the supernatural. It’s been a decade since she appeared in The Awakening (2011) and even longer since Dorian Gray, but she slides back into the material with ease, selling every moment of sorrow and terror.

What works so well about The Night House is its portrait of bereavement. Late in the proceedings, when another movie would be ratcheting the thrills with CGI apparitions, Bruckner slows things down to show Beth experiencing an emotional breakdown over her loss. The screenplay never forgets that Beth—no matter what she discovers about Owen, even after the shock of learning what he was been capable of in life—still loves and misses him. Emotionally, the movie rang true, which helped sell some of the more outlandish ideas introduced later.