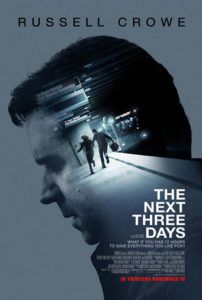 Somewhere in The Next Three Days, there’s a fantastic Hitchcockian thriller begging to get out. Unfortunately, writer-director Paul Haggis (Crash, In the Valley of Elah) chose not to listen when his story pleaded to be an absurdist adventure. Instead, Haggis employs the moody seriousness that made the French source film, Fred Cavayé’s Pour elle from 2008, so classy. Forgetting that the romantic dramaturgy of French filmmaking doesn’t translate well to other languages, Haggis’ Hollywood remake forgoes the need for escapist thrills and resolves to brood over the methods of criminality. It’s undeniably a smart movie, with some clever ideas and occasional bouts of suspense, but the scenario has so much potential for excitement and drama, which are lacking here, that the result feels like a missed opportunity.

The life of a Pittsburgh family man named John (Russell Crowe), happily married to Lara (Elizabeth Banks) and father of Luke (Ty Simpkins), is turned upside down when his wife is arrested for murder. Within a few minutes of screentime, three years have passed and Lara has lost her last appeal. Pegged with a 20-year sentence, Lara attempts suicide, inciting John to seek other means than the courts to free his wife from prison. As a community college professor, he teaches students about the importance of one’s own view of reality through readings of Don Quixote. And so, not surprisingly, John becomes a Quixotic hero himself when he schemes to free Lara with an impossible break from the Allegheny County Jail.

Luckily, he has the internet to guide his first foray into criminality. Online videos teach him how to make “bump keys” and how to use a tennis ball to break into vehicles. When searching for books on prison breaks, he comes upon the memoir of a seven-time prison escapee, played by Liam Neeson. In his sole scene, the rough-faced Neeson describes the sort of hard-edged mind-set John will be forced to adopt should he attempt his plan, and almost steals the movie in the process. John proceeds by trying to buy forged passports from hoodlums, but finds drug dealers don’t like being pestered by naïve yuppies, and gets severely beaten for asking. Eventually, he runs out of getaway money and opts to rob a nasty drug lord (Kevin Corrigan) at gunpoint in a scene straight out of Death Wish.

Curiously, Lara’s innocence hardly comes into question, if only because the film sides with John, and John is blindly dedicated to his wife (and rightfully so). In one scene, Lara’s depression gives way to a false confession that no one, neither the viewer nor John, believes. The non-question of Lara’s guilt is about as undeveloped as John’s police opposition (played by Lennie James, Jason Beghe and Aisha Hinds). Beghe’s Detective Quinn looks inquisitively at John, suspecting he’s up to something; he looks inquisitively out the window and points out the weather; he looks inquisitively at Lara’s crime scene and nearly cracks the case. Meanwhile, James’ Lieutenant Nabulsi is hot on John’s trail during the escape. But none of these police characters are given any more characterization than mere cop stereotypes (comparable to John Hamm’s recent role in The Town). When Haggis doesn’t expand on Lara’s potential guilt or the cop characters, he skips over the potential for added viewer involvement.

In the final act during the jailbreak, John has a precise plan that Haggis doesn’t reveal in its entirety, rather only hints at through suggestive scenes, or the ‘Master Plan’ collection of photographs and maps with scribblings on John’s bedroom wall. Even so, when it comes time to carry out the plan, scenes that should be filled with tension seem to unfold with a staid mannerism, as though the audience should be following a checklist of what comes next. Some unexpected inconveniences arise along the way, but there’s never a sense of certain peril. And none of the mild “twists” are shocking enough to incite thrills. A few characters find out about John’s plan, such as John’s father (Brian Dennehy) or the mother of his son’s playground friend (Olivia Wilde), but they simply look on with quiet approval in their knowing, another chance for suspense lost.

Haggis has fashioned a thriller devoid of memorable thrills, and a drama without much to draw our emotions. What works about The Next Three Days works because of Crowe’s ability to convey a sense of internalization within his characters; from Bud White in L.A. Confidential to Ben Wade in 3:10 to Yuma, Crowe has offered many layered portrayals that have solidified his affable screen presence and esteem as one of today’s best actors. Yet Haggis forgoes complex characterizations and completely dismisses the potential for grand thrills within the scenario in favor of a standard prison-break procedural. He forgets that the hows are almost never as important or as dramatically involving as the whys, leaving the audience mildly entertained but never truly invested in the material.