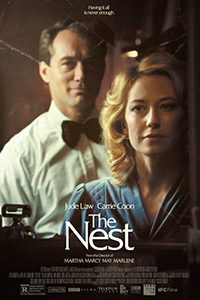 In the most fulfilling way, The Nest is a drama without an obvious hook. It doesn’t depend on a catchy device or an over-emphasized theme to give it purpose; rather, it relies on well-constructed characters and the inherent drama of family dynamics. Writer-director Sean Durkin, whose debut Martha Marcy May Marlene in 2011 had such a hook with its account of cult brainwashing, considers what happens to a family when their circumstances change for the worse. But Durkin’s second feature film has an atmosphere of interpersonal drama not easily distilled into a logline that does its characters justice. The film revolves around complicated people who often behave in ways that betray their image of themselves. They’re played by actors capable of integrating the many facets of their roles, performed with fascinating details and deviations, into full-fledged human beings. Durkin carefully avoids telegraphing a lesson to his audience in his screenplay for The Nest, concentrating instead on behavior that represents a sublime mix of acid and affection.

Jude Law and Carrie Coon star as a married couple worthy of John Cassavetes and Gena Rowlands, though Durkins’ aesthetic proves far more mannered than Cassavetes. Set in the late-1980s in the midst of Reaganism, the film follows Rory (Law), an investment broker who lives in upstate New York with his wife, Allison (Coon), who trains horses for a living. They own fine things of the period, including a cordless phone, an espresso maker, and other signs of a privileged life. They seem so wrapped up in their routines and acquisition of objects that the distance between them almost goes unnoticed. Their children, the teenage Sam (Oona Roche), Allison’s daughter from another relationship, and their adolescent son Ben (Charlie Shotwell), get along with playfully mocking jabs made with apparent sibling warmth underneath. On the surface, the family has charmed interactions filled with good humor (the way they share sandwiches is particularly endearing). And yet, The Nest opens with an agitated sequence with Rory, the motivations of which will remain unclear until a devastating moment.

Feeling sour about his life in the United States, Rory wants to move back to London, where he’s convinced he can advance their fortune at his old firm under his former mentor (Michael Culkin). Reluctantly, the family joins him at a massive estate on the English countryside with seventeenth-century floors and Elizabethan furniture. Rory has paid a year’s rent in advance, purchased a chinchilla coat for Allison to soften the blow, and arranged for his son to be in the best school around. But the move is like cutting stitches before the wound can heal; soon, everything opens and begins to rot. Sam changes sharply, transitioning into a rebellious phase that isolates her brother. Ben retreats inward, wetting the bed and getting into trouble at school. Allison plans to build a stable on the estate’s property, but the horse Rory purchased for her behaves strangely, and the workers hired to build the structure stop showing up because Rory’s checks have bounced. Their bank account has run dry, depleted by Rory to appear prosperous. However, this practical problem accentuates their relationship’s deeper issues. 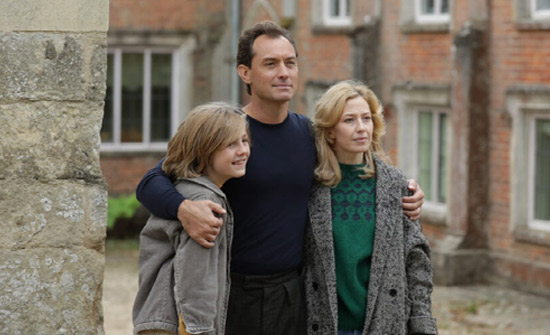 Durkin’s direction avoids anything that might be considered flashy or overstated. What’s apparent is that he has arranged every component to support his story and its emotional impact. There’s not a moment or artistic choice that doesn’t align with the cohesive whole.  Shooting with tangible 35mm, cinematographer Mátyás Erdély captures the family’s new home in earthy browns and shadows that could be mistaken for a haunted house movie. The old dark estate isn’t quite creepy to the viewer (though Sam and Ben describe it so). Still, there’s an emptiness inside that heightens every human interaction, allowing its actors to inhabit almost stagelike spaces that never feel like home—just a place they’re living. Other formal touches, such as the quiet, almost nonexistent score by Richard Reed Parry (from Arcade Fire), tend to recede, allowing the actors and their onscreen immediacy to take over. Scenes inside their vast home have been blocked to underscore the place’s excess next to the family’s needs, which proves stifling and even unnerving while at the same time revealing the broader problems at the center of their family.

It’s tempting and not altogether off-base to read The Nest as an indictment of American capitalism and its potentially destructive “you can be anything” attitude as a gateway to success addiction. Rory, who comes from the classist British culture that considers your lineage before your talent, resents his modest roots and used the so-called Land of Opportunity to make a small fortune thanks to deregulation and ruthless, Gordon Gekko-style brokering (“I had a million dollars once,” he moans later). But upon returning to London, he discovers that pushy deals and bombastic brags don’t have the same effect. In one of his best performances, Law plays these scenes brilliantly; it’s as though we see the 1980s version of Brad Strand, his character from I Heart Huckabees (2004), before he discovers his soul. Strand repeatedly tells a story about Shania Twain and a chicken salad sandwich to impress his business connections. Rory tells all manner of tall tales about his family’s penthouse in New York or seeing stage productions at the National Theatre in London, but his clients aren’t impressed. His desperate need to project success is matched by his hostility when Allison confronts his pretenses in a cruel dinner scene. “You’re embarrassing,” he tells her. “You’re exhausting,” she replies.

The sheer talent on display by The Nest’s two leads cannot be overstated. Law excels at playing charismatic, morally bankrupt characters, from Dickie Greenleaf in The Talented Mr. Ripley (1999) to his roles in Sleuth (2007), Contagion (2011), and other theatrical roles. He makes Rory despicable yet not undeserving of our empathy. Rory may be saddled with a drive that betrays him, but he’s a tragic figure. Law’s bright, sad eyes remind us that he’s not a monster. Coon, best known from HBO’s The Leftovers and the third season of FX’s Fargo, gives a powerhouse performance in her balance of Allison’s fierce independence and her refusal to admit how much she savors the finer things. In one scene, she reels over the loss of her horse to an unsympathetic Rory. “He was a living, breathing animal, and he died,” she cries, neatly compartmentalizing the 150 or so chinchillas it took to make the coat she initially wears, before it becomes a symbol of Rory’s desire to appear cultured. With masterful body language and expression, Coon shows us that, in her way, Allison remains just as obsessed with appearances and dismissive of the problems in her marriage as Rory. “Everything’s good,” she insists to her children, who know everything’s going wrong. Neither Rory nor Allison can see their destructive codependence, and the actors render this with perfect clarity. 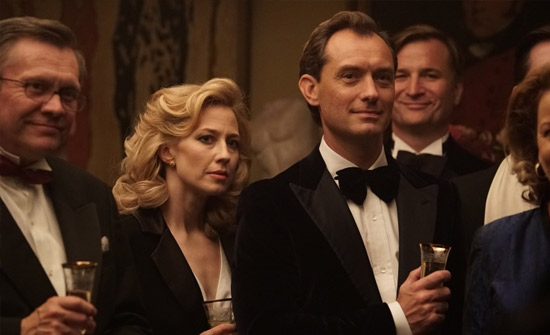 Elsewhere, Durkin reveals additional facets in scenes that explore his characters’ complexity, all while avoiding expositional dialogue and overt statements about what’s happening. He uses what might be described as transitional moments of Allison driving and smoking, riding her horse, or working on a nearby farm to contrast the role that Rory wants her to play in their financial situation. Somehow, Allison is a strong woman who resigns herself to bad advice from her mother (Wendy Crewson): “It’s not your job to worry [about money]. That’s your husband’s job.” She dresses in elegant attire and makeup to look the role, and yet she rallies against social decorum—to monumental effect at one dinner, before escaping to a club to dance by herself. Rory’s desire for success may seem to have suppressed all other emotional ties until he visits a long-neglected mother (Anne Reid) and beckons her to have a role in his life again, albeit to no avail. Durkin’s screenplay recalls the domestic thrillers of Asghar Farhadi (A Separation), where layers of the onion continue to peel away as the narrative progresses, gradually exposing the characters in all their entanglements.

We learn early in the film that relocating to London marks their fourth move in a decade. The pattern repeats itself, even though the events in The Nest seem to bring the couple to an impasse. It’s unclear whether these events represent yet another lap around the same track in the larger race of their lives together or if this story remains an isolated and intensified climax after which nothing will be the same. Durkin’s screenplay is deliciously ambiguous about this, leaving much up to the viewer to decide. “Sometimes I’m up, sometimes I’m down,” explains Rory. The film opens as Rory finds himself unsatisfied with merely being “up” and nagged by a desire to be on top. He’s blind to everything else. Later, during a cab ride after a disastrous business dinner, Rory laments his situation to the driver, arguing that at least he’s “the best” father. “I keep a roof over their head, I give them the best of everything, and I’ve never laid a hand on them,” he explains. The driver responds, “That’s the bare minimum, mate. Don’t pat yourself on the back for that.”

By the end, Durkin finds a kind of acceptance for his characters, just as his viewers must accept that The Nest isn’t a closed book of a film. He doesn’t offer a traditionally satisfying conclusion or happily-ever-after answer to what the previous 107 minutes of screen time mean. It’s unclear whether the slowly building volatile events we’ve just witnessed will result in a divorce, supply the family with a catalyst to change, or will represent the latest “down” in their ongoing saga of ups and downs. Though the parents and their children appear settled in the last shot, we cannot help but ponder about what will happen next. Durkin has thoroughly implanted these characters in our minds, giving them a place to live and breathe long after the film is over. We’re left thinking about the intricate performances and how the many dark corners of their home, beautifully captured on camera, reflect each family member. Told with the economy and tightly wound drama of a chilly, theatrical style, The Nest is the sort of film that burrows in the mind, demanding that the viewer invest themselves in a challenging but rewarding excavation.