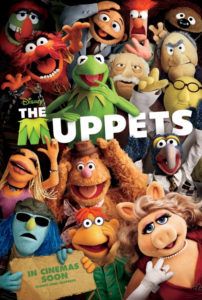 Revived and reinvigorated, The Muppets reminds us, with a loving sense of nostalgia, how much we adore Jim Henson’s creations. The last time the Muppets appeared on the big screen was in 1999 for Muppets in Space, but even then their edge was fading. You could argue that once The Muppet Show went off the air in 1981, but certainly by 1990 with Henson’s death, their knack for absurdity softened into material directed almost exclusively toward children. Titles like Muppet Treasure Island and later direct-to-video fare like The Muppets’ Wizard of Oz kept adults at a distance, leaving us to remember how great the Muppets used to be. Now we don’t have to look back anymore, because Jason Segel and Nicholas Stoller took action, pitched their idea of an “old school Muppet movie” to Disney, and the result is great fun.

Segel and Stoller’s adoration for Muppetdom was evident back on Forgetting Sarah Marshall, in which Segel performed a puppet rock opera about Dracula (a production I’d still like to see in full form). As writers, they tap into that going-on-a-road-trip and getting-the-gang-back-together mentality that fuelled 1979’s The Muppet Movie. As such, the movie opens with the Muppets disbanded, their abandoned studios in jeopardy. Greedy oil tycoon Tex Richman (Chris Cooper) has an evil scheme to purchase the studio and then demolish it to drill for oil underneath. While touring the decrepit remains of the studio, lifelong Muppet fan Walter (voice of Peter Linz), a Muppet-like character, overhears the plan and enlists his brother, Gary (Segel), and Gary’s girlfriend, Mary (Amy Adams, just delightful), to find Kermit and warn him. It takes some convincing, but Kermit finally goes along to getting everyone back together to hold a two-hour telethon and save their studios.

But the original Muppets have been scattered. They find Fozzie Bear in a dank nightclub working with “The Moopets”; Animal attends anger management with Jack Black; Gonzo runs a successful plumbing business; Miss Piggy has become a plus-size fashion designer for Vogue in Paris; they find Ralph sleeping in a hammock. As for the rest, a montage will do (the characters often express concern over the movie’s budget and runtime from within the movie itself). Voicework, unfortunately, is not done by the original Henson workshop, and more than anyone else we can hear the lack of Frank Oz. Their replacements get the job done, however, as the characters never appear to be just constructions of felt and plastic eyes. These Muppets are brought to life by master puppeteers, not augmented with phony-looking CGI. And once they’re onscreen, we forget about them being puppets at all, and they return to those fully formed characters we’ve come to love.

The entire plot serves as an excuse to re-introduce audiences to these beloved characters, but it’s done in such a self-aware way that makes the silly plotting intentionally hilarious. When Cooper looks at his lackeys and says “maniacal laughter” instead of actually laughing maniacally, it’s genius; so is Cooper’s devilish rap “Let’s Talk About Me”. Segel and Stoller find every excuse to engage in airy musical numbers, including two or three all-out riots. The song “Man or Muppet” addresses the fact that Segel has an almost Muppet-like quality himself (I don’t think I stopped laughing for the duration, nor could I stop giggling during Camilla and The Chickens’ bock-rendition of “Forget you”). All the other usual Muppet movie features are here, including clever humor mixed with slapstick, choreographed dancing, and celebrity cameos galore. Appearing onscreen are Alan Arkin, Emily Blunt, John Krasinski, Neil Patrick Harris, Sarah Silverman, Mickey Rooney, Zack Galifianakis, Dave Grohl, Feist, Rashida Jones, and plenty others.

If I have one minor criticism about The Muppets, it’s that Rizzo the Rat barely makes an appearance. For shame. Aside from this detail—and how Walter, a not-very-interesting new character, looks like Sesame Street’s Bert, but without the unibrow—Segel and Stoller, along with director James Bobin and Henson Studios have succeeded in re-popularizing the Muppets for a new generation. Kids will find it entertaining to be sure, although adults who remember the Muppets’ heyday from thirty years ago will have a more significant connection to the material, and further grasp how edgy this feature really is. After a hilarious, parody-laden marketing campaign of spoof trailers, the movie itself delivers all that we were expecting and more. It’s evident the Muppets have returned with renewed energy. Welcome back.