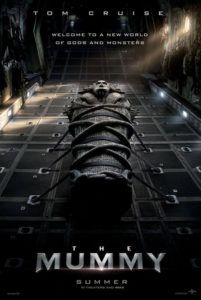 The Mummy, Universal’s remake-of-a-remake, reveals its hollowness before the first shot. When shadows engulf the studio’s classic planet logo, it turns over into an eclipse and announces their “Dark Universe” brand in bold metallic letters. Not unlike Sony’s The Amazing Spider-Man reboot or this year’s King Arthur: Legend of the Sword from Warner Bros., Hollywood’s current universe-building disorder once again produces a doomed-from-the-start franchise. Every major studio in the industry is trying to mimic the Marvel Cinematic Universe with a series of interconnected films and intellectual properties. Universal, long known for their classic horror pictures like Dracula and Frankenstein (both in 1931), has tried (and failed) several times over the last few decades to exploit those brand identities for commercial success with CGI-heavy results like Van Helsing (2004) and The Wolfman (2010). Such attempts hover somewhere between underwhelming and downright awful. The Dark Universe intends to reinvigorate iconic Universal monsters for a new generation of moviegoers.

The new franchise begins not with a remake of the 1932 Boris Karloff starrer The Mummy, but with director Stephen Sommers’ outlandish, Indiana Jones-esque baubles of the same name. You remember these, right? This trio of ridiculous Mummy yarns starred Brendan Fraser and also produced a 2002 spinoff, The Scorpion King, which, for better or worse, is responsible for launching the acting career of Dwayne “the Rock” Johnson. Fraser and an overplucked Rachel Weisz (who had enough sense not to return for part three) spent each film trying to evade various poorly animated CGI baddies: skeleton warriors, deadly scarabs, long-mouthed mummies, and similarly long-mouthed sandstorms. However silly the second, adventure-styled Mummy franchise may have been, it amassed huge box-office numbers for Universal during its run (1999-2007).

The studio’s new film is essentially a remake of the 1999 version; in other words, it’s less a “Dark Universe” than a dimly lit actionized blockbuster. Screenwriters David Koepp (Jurassic Park), Christopher McQuarrie (Mission: Impossible – Rogue Nation), and Dylan Kussman (Jack Reacher)—along with three other writers responsible for the screen story—change around a few details, but the basic elements remain in place: With a pretty female scholar and a comic-relief goofball at his side, a thieving scoundrel unwittingly awakens the remains of an evil ancient Egyptian, who was “mummified alive” and cursed for eternity. Once awake, the mummy plans to attain control over the world, but not if the scoundrel-turned-hero has anything to say about it (yawn). The 1999 film’s beetles have been replaced with spiders and crows, but the central mummy still commands plumes of face-sand, still needs an artifact and a human sacrifice to restore itself, and still sucks the lifeforce out of its victims, slowly regenerating from a laughable CGI zombie into an actor over the course of the story. 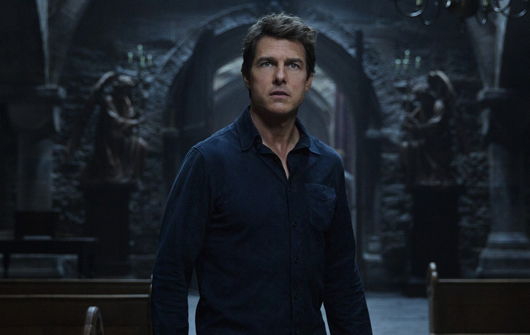 The cornball quality of Brendan Fraser has been replaced by Tom Cruise who, under a series of bewildered expressions, plays Nick Morton, a U.S. military reconnaissance agent moonlighting as an acquirer of precious antiquities. When Nick and his jokey accomplice Chris (Jake Johnson) uncover an ancient Egyptian tomb curiously buried under an Iraqi village, Dr. Jenny Halsey (Annabelle Wallis) arrives with an army escort (commanded by Courtney B. Vance) to investigate. They explore the tomb, which turns out to be an ancient prison housing Ahmanet (Sofia Boutella), a princess who made a pact with Set, the god of death, to become an immortal god-queen. Cursed and mummified alive, Ahmanet reemerges as a shriveled corpse in contemporary times, causes a military escort plane to crash land in England, and hunts down the one who freed her (Nick) to sacrifice him to Set using the film’s MacGuffin: An antique dagger whose magical ruby on the handle has been missing for centuries.

Also in England, Russell Crowe appears as Dr. Henry Jekyll (the Jekyll/Hyde character isn’t a classic Universal monster property, aside from their appearance in Van Helsing), heading a team of high-tech paranormal investigators who seek out and destroy evil. They’re on Ahmanet’s trail but also try to secure Nick, who has been brainwashed by sexy visions of Ahmanet. Along the way, Crowe delivers a hammy performance, especially when Mr. Hyde emerges, and the film ungainly blends two horror properties in a way recalling the aforementioned Van Helsing (in other words, not good). Cruise, who I normally enjoy, provides a familiar performance as a good-humored action hero, indistinguishable from Ethan Hunt, Roy Miller, or Jack Reacher. Johnson’s role bears some resemblance to Griffin Dunne’s character in the horror-comedy classic An American Werewolf in London (hint-hint).

Indeed, audiences should expect even more cross-franchise pollination by the film’s end, when Nick finds himself battling some inner force that leaves him, quite inexplicably, with the power to control sandstorms and transform his face into a monster-thing. Evil is denoted by Ahmanet’s duplicate sets of irises and pupils in a single eye, and Nick develops the same trait in ways Universal hopes future Dark Universe sequels will explore. Not that The Mummy is interested in horror. The film engages in several action set-pieces that find Cruise and Wallis racing around London in car chases or evading Ahmanet’s zombified drones in an underground tomb. The much-advertised plane crash sequence is breathlessly handled, except that a plane crash is perhaps not the ideal centerpiece for a film called The Mummy. Directed by Alex Kurtzman, best known as the co-writer of modern blockbusters like Transformers and the Star Trek reboot, the film occupies a generic fast-pacedness that caters to modern, ADD-riddled brains.

Moreover, the film seems to be replicating Universal’s Fast/Furious series with its dominating influence of machine guns and over-the-top vehicular stunts (I fully expect to see Frankenstein’s monster chasing a submarine in a neon-orange Lamborghini before long). Then again, the Dark Universe’s success depends on The Mummy‘s ability to connect with audiences and earn profits. And while the international box-office will undoubtedly provide Universal with numbers in the black, will anyone care? The film proves so bloated, formulaic, and unexceptional in almost every way that it’s difficult to imagine anyone excited about the prospect of more films set in this universe. People and cars are tossed about the screen, and there’s a prevalence of wire work and stunt choreography, but there’s not a single genuine scare or thrill. Ultimately, The Mummy‘s attempt to recapitalize on a franchise that wasn’t that good to begin with, or to make the material more than just visually dark, fails due to the writing by talents capable of much more and an overwhelmingly misguided conceptual approach.