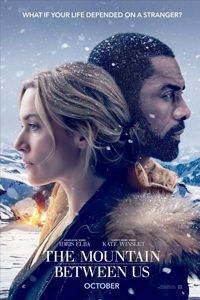 Adapted from Charles Martin’s 2010 best-selling novel, The Mountain Between Us features a lovely cast in absurd, perilous, and romantic conditions. Imagine the possibilities of Kate Winslet and Idris Elba stranded after a plane crash in the Rockies, forced to fight the cold and starvation with nothing more than their bickering to occupy them, and their bodies to keep them warm at night. The poster’s tagline “What if your life depended on a stranger?” seems silly in this context, given that being stranded somewhere with either Winslet or Elba has worked its way into the fantasies of most moviegoers. What’s more, the survival scenario never reaches the dire levels of Frozen (the horror film from 2010, not the Disney animated musical) or The Grey (2011), so our stars have been spared conversations about cannibalism, losing limbs to frostbite, or running from flesh-hungry wolves. Rather, the film offers a comparatively effortless march through the wilderness, focusing on a more pressing question: Will they fall in love?

After receiving two Oscar nominations for Best Foreign Film on Paradise Now (2005) and Omar (2013), Dutch/Palestinian director Hany Abu-Assad makes his Hollywood debut for this glossy Twentieth Century Fox release. He opens the film with some showy camera moves that look less impressive, and more CGI-augmented, than they should be. American photojournalist Alex (Winslet) has a short deadline to get home for her wedding the next day. Her commercial flight has been canceled. An English neurosurgeon named Ben (Elba) also needs to arrive in Denver to perform emergency surgery on a young boy. Alex comes up with an idea to charter a small plane from a rugged pilot (Beau Bridges) and his yellow Labrador retriever, and overhearing his situation, she asks Ben to join her.

In the first few moments of the flight, Abu-Assad and cinematographer Mandy Walker perform revolutions around the cockpit and passenger area of the tiny plane in a seemingly unbrokenn shot, the cuts masked by a computer. The stagey sequence serves no functional purpose to the scene except to call attention to itself—and moreover, it’s the only attempt at formal virtuosity in an otherwise straightforward film. All at once, the pilot goes into cardiac arrest and the plane crashes atop a mountain, smashing the emergency beacon. The crash sequence is brief and jarring, but hardly memorable next to more elaborate spectacles in Cast Away (2000) and Flight (2012). And before you freak out, you should know: the dog survives the crash, and in fact, the pooch makes it through the entire film.

Other than that, the crash has left Alex with a nasty wound on her leg and Ben relatively unscathed. Unfortunately, the pilot didn’t file a flight plan, and neither of the passengers told anyone where they’d be—important details to be sure. With few provisions, the two must attempt to find their way down off the mountain and back to civilization. Neither Abu-Assad nor the script by Chris Weitz and J. Mills Goodloe creates any understanding of how far the two must travel, or over what period of time. Days pass in a blink, though the characters never get very far. The use of time and space feels uncertain, and the subzero temperatures never seem to have much consequence on Alex and Ben, but then The Mountain Between Us is less a survival story than a romance.

Winslet and Elba, of course, remain magnetic screen presences, though their dull character descriptions prevent anything beyond passing emotional investment. Alex is impulsive, and her spontaneity doesn’t suit Ben’s methodical stubbornness. These tired, one-note personality types emerge in the occasionally distracting dialogue: Ben says, “I need to occupy my amygdala.” And when he tries to explain to Alex that part of the brain, she defensively says, “I know what an amygdala does.” They’re quite a pair (think Paula Abdul and MC Skatt.) Their eventual romance over time works if only because the story demands it, leading to an epilogue after their rescue that leaves their (predictable) future in question. (Note: The film never explains what happened to the boy that Ben was rushing to save. Bummer.) When it’s all over, The Mountain Between Us takes few risks, but it contains some gorgeous scenery, attractive stars, remains watchable, and largely inoffensive in its mediocrity.