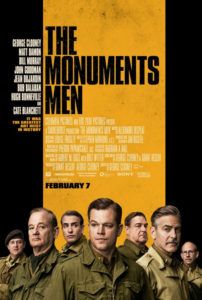 The Monuments Men makes a noble effort to showcase the Monuments, Fine Arts, and Archives (MFAA) program, an endeavor spearheaded by United States art historians to preserve significant art and architecture at risk of theft and later destruction by Hitler’s Nazi regime. Director and star George Clooney, along with his writing and producing partner Grant Heslov, have modeled their picture after entertaining World War II movies from the 1960s. Clooney’s impressive international cast of chummy Allied soldiers and Alexandre Desplat’s airy score recall the dynamic in John Sturges’ The Great Escape (1963), while the story of men risking their lives for stolen European artwork received excellent treatment in The Train (1964) by John Frankenheimer. However, Clooney’s film adopts an episodic structure instead of a straight-line narrative, meandering about Europe in an unfocused manner until the midpoint arrives and the viewer, who has been waiting for the film’s pacing to pick up, all at once realizes there’s far too little screen time left to develop these characters or scenario in any suitable fashion.

After receiving approval from Roosevelt himself, art historian Frank Stokes (Clooney, his character based on Harvard conservationist George Stout) sets out to enlist a band of middle-aged, out-of-shape art scholars willing to participate in the MFAA: James Granger (Matt Damon) from New York’s Metropolitan Museum of Art, Chicago architect Richard Campbell (Bill Murray), sculpture expert Walter Garfield (John Goodman), French design guru Jean Claude Clermont (Jean Dujardin), the British historian Donald Jeffries (Hugh Bonneville), and art director Preston Savitz (Bob Balaban). They’re later joined by Sam Epstein (Dimitri Leonidas), a German Jew who serves as driver and translator. Although they go through a lighter version of basic training together, the team arrives in Europe with the war nearing its close and splits up to scout after various individual works of art. Jeffries heads to Bruges to protect Michelangelo’s sculpture of the Madonna and Child, while Clermont and Garfield search for clues to the missing Ghent Altarpiece by Jan van Eyck. Throughout, it’s easy to lose track of what these characters are doing and where they’re going, as the story is more an assemblage of subplots than a widespread wartime yarn.

Among the most entertaining of these is Granger’s mission, which involves him heading into Paris to gather intelligence on where Hitler is storing the masses of plundered art for his proposed Führermuseum, set for construction in his hometown of Linz. Granger connects with Claire Simone (Cate Blanchett, her character based on the Jeu de Paume’s hero Rose Valland), a Parisian woman who thoroughly documents the whereabouts of art as it passed through the Jeu de Paume gallery under SS commander Viktor Stahl (Justus von Dohnányi). Simone distrusts U.S. interests in European artwork, but eventually, Granger and Simone’s interlude stands on the cusp of a romance. Elsewhere, the other historians keep out of major battles but don’t altogether avoid danger. The deaths of two members come before the film gives us time to know and love them, and when the film spends the remainder of the 2-hour runtime mourning their deaths, the gravitas is hardly felt. Moreover, The Monuments Men rarely loses itself in the moment, never realizing the thrills of the war movie genre or the burgeoning romance between Granger and Simone.

Far too often during the proceedings, the film pauses during what could’ve been an enthralling moment for Stout to give a longwinded speech. Here, he speaks about his men who have died and asks the question: Is a man’s life worth a work of art? Indeed, this question is asked again and again throughout The Monuments Men, but it’s a redundancy, as the film’s eight-member outfit has already agreed to risk their lives to recover stolen art. By agreeing to participate and pushing through the obstacles they face, they’ve answered this question. But Clooney’s film sacrifices its own momentum and possibly the degree to which his audience is engaged by wearing a patch of self-importance on its shirtsleeve, reminding us again and again, through tedious pronouncements and interrupted moments of tension, that these men sacrificed themselves for art. Regardless of their noble cause, the film doesn’t demonstrate an unabashed love of art, and few scenes delve into the importance of art itself. Certainly, Stout’s numerous speeches tell us why art remains a vital cultural and historical marker, but Clooney’s film does not show us why and seems to take the beauty and visual majesty of these works for granted.

Fortunately, the technical aspects of the production are all top-notch, beginning with cinematographer Phedon Papamichael’s lusciously detailed visuals and production designer Jim Bissell’s gorgeous depiction of European locales. Numerous sweeping shots of Normandy and Paris look pristine, if enhanced by CGI to give them a circa-1944 appearance. Clooney’s all-star ensemble also enriches the dull screenplay, giving the illusion that these understated characters have more weight behind them than what appears onscreen. Watching lively personalities like Jardin, Goodman, and Balaban do their thing is a delight, whereas Clooney and Bonneville have less to do. The Damon character maintains a chuckle-worthy running gag where he speaks French so poorly that French people keep asking him to speak English, and Murray has a tender moment where a phonograph message from his family brings him to tears. But The Monuments Men feel underdeveloped on the whole, as if Clooney had drastically trimmed an earlier three-hour version of his film down to two-thirds its length to meet standard runtime requirements, and therein removed most signs of character development. Ironically enough, the sole female role played by Blanchett is the film’s most dimensional character.

Devoid of urgency and intent on soapboxing, The Monuments Men takes a tremendously significant story and reduces it to an abbreviated, largely joyless experience. This is not to suggest that Clooney’s film is without its soft pleasures. The cast and production, as well as the mild humor throughout, are just pleasant enough to keep one’s attention, but the material could not be described as either insightful or exciting—as if Clooney and Heslov couldn’t decide if their film should be scholarly (see the 2007 documentary on the subject, The Rape of Europa) or escapist (Frankenheimer’s The Train), and in turn, made a tonally unbalanced motion picture. One scene might contain a sobering glimpse of wartime atrocities but the next features a humorous aside with the charming cast, yet none of it comes together in a consistent way. All the while, Clooney and Heslov spent too much time re-validating the ideals behind the MFAA’s mission and too little time on the mission itself. For this critic (and former student of art history), the experience proved achingly underwhelming as both entertainment and informative history.